In the LEGO house episode of James May's Toy Stories, the engineers built the beams with studs facing upwards: around 9.5 mins into http://youtube.com/watch?v=mEFPhXl3QQY

How much stronger would it have been (if at all), if they had built them staggered with studs sideways, as below, with the same number of bricks? 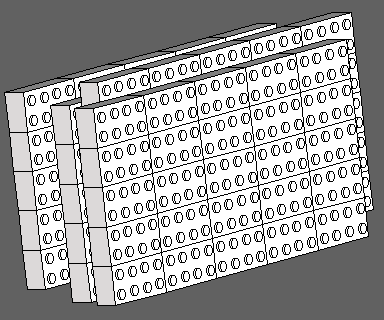 How much stronger still, if they had used large plates instead of bricks? 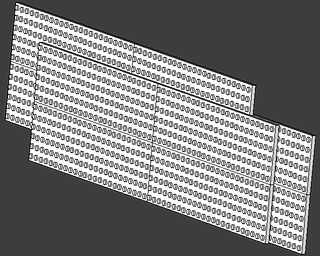 If it is any better, why did they not do that (did they just not think of it, or was there an instruction from LEGO or the producers that studs must be on top)?

Depends very much what you mean by "strong".

Vertical crush resistance would be highest as the Lego house people did it because that gives a continuous vertical wall down the edge of each stack of bricks. Offsetting as you suggest means that the edges of each brick are resting on the flat top of the brick below. If they needed to link the bricks horizontally they would either use a row of 2xN bricks or a later of plates. Plates would be heavier and more expensive but somewhat stronger, if wall spreading was an issue (which it did not seem to be in the show).

For beams layered plates would be ideal, possibly in a traditional C or I beam shape, with something to hold the layers of plates together. The easy option there is a layer of Technic bricks top and bottom with Technic liftarms or beams linking them.

For catenary members (like suspension bridge "cables") I'd follow the teams in Australia who have obviously done a lot of research and experimentation, and go with Technic liftarms joined with half-width liftarms and axles.

If instead you're looking at a MythBusters-style giant Lego ball and you want that to stay intact as it rolls then many layers of plates would be useful (the MythBusters ball was made of big Lego-brick bricks, IIRC about 24x48 studs and perhaps 10 or 12 layers tall. It fell apart quickly (and so did not do much damage to anything). For that you would probably also want to use some technic bricks with axles linking them to make internal 3D tension members to hold it together. But you will end up with a tonne of Lego rolling down a hill in that case... not necessarily a good idea.