I am working on a suspension bridge with my sons and have encountered two problems.

I've used white nylon rope / string for my Lego bridges. When I think of twine I think of the tannish, brownish, rough, fraying type of string. The nylon stuff is cleaner and in my humble opinion appears sharper. A Lego purist would not allow any non-Lego element in a creation, but when it comes to suspension bridges, there are very few options. I've viewed the use of plates (typically 1 X 6 , 8 , 10, etc.) for the main cables and suspenders, but this takes away from the cable feel and appears more like an eyebar suspension system - which were used before the invention of wire cables, but no major suspension bridge built in the past 140 years uses eyebars.

A good tower to span ratio seems to be 1:10 and that is tower above the roadway as what is below the roadway is irrelevant, with ship clearance the contributing factor there. Example... the Akashi Kaikyo Bridge in Japan has towers that are ~975 feet high. The roadway at mid-span is ~320 feet above the water. That makes for the tower above deck of ~655 feet. The span of the AKB is 6,532 feet. This is close to the 1:10 ratio. The Golden Gate is a bit different with towers ~750 feet high and a deck height of ~220 feet. That makes 530 feet of tower above deck and the span is 4,200 feet. Now we're down to 1:8. The difference is the steel in the Akashi Kaikyo Bridge's cable is much stronger due to advances in the 50+ years since the Golden Gate and thus shorter towers could then be built. The shorter the towers the more tension on the cables. Had the steel in the main cables stayed the same strength, then the towers for the AKB would then had to have been at least 150 feet higher.

A team in Perth (Australia) built a pure Lego suspension bridge that is quite long. All the links I can find are to youtube videos which is not very useful (here and here, for example).

This media story has the photo I've copied below 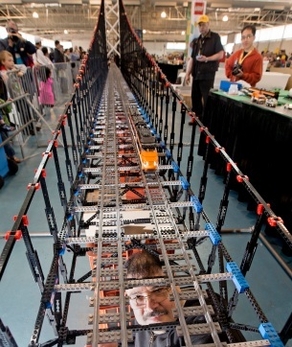 18
Bridge from just basic bricks?
7
How strong are blocks in general - is adhesive necessary when building large structures?
22
How to build bridge using 4.5/12v train rails from 1969 Lego brochure
12
What are good books for building techniques of LEGO Technic
7
Long train Bridge tension and compression angles (minimum brick count)
12
What is the length of a DUPLO train bridge?
6
Mecha Rail Launchpad Building techniques?
6
Building techniques for designing a LEGO City Street scene?
19
Is there a catalog of Lego building techniques?
19
How is the roof on this bridge town formed?