Can I use the old 4.5V and 12V blue/gray era rails with newer trains?

I am looking to get my son into LEGO, but I am thinking of getting the remote set so we can expand it some more.

My question is, can I connect the new track to the old somehow, and do the new trains fit the old track?

You can absolutely run RC and PF trains on 12V track. You can leave out the center conducting rail since it won't be delivering any power to the train, unless you are planning to run both 12V and remote trains.

The main LEGO train sets have all used the same rail gauge, which is the main thing that matters.

If you'd like to use both your 12V track and the new RC track that you get, they can be joined together in various ways. Here's an example from a LUGNET thread: 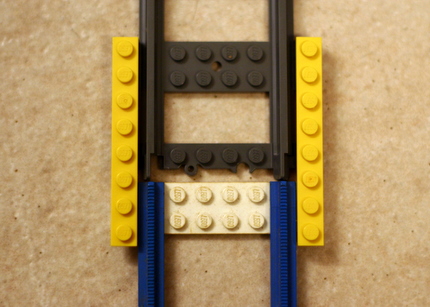 There are also a few places where you can get third party adapters if you'd prefer to go that route.

All LEGO train tracks have had the same gauge, so newer trains will fit old tracks, including 12V/4.5V. Since the wheels themselves are not exactly the same, you may run into some small issues at points, but it should be OK most of the time - and using RC track wouldn't fully prevent the issue anyway. (If anything, I suspect trains woudl actually derail more on RC track than 12V)

As for connecting tracks, it's not impossible but will require some work. You can either place the track as close as possible to each other (usually using a jumper plate as the closest you can get is half a brick away). If you do this in a straight line, the train should have no difficulty rolling on the gap. Another solution would be to cut a RC track piece in half. Of course, LEGO modification is usually not something we discuss a lot here, but there are a lot of people doing track modifications, and usually for much more complicated goals.

In any case, your best bet is probably to have a full 12v layout and then have some RC parts branch off it rather than mix both systems all over the place.

I wouldn't say that 12V is superior, to be honest. There are definite advantages: the remote control of points and signals is certainly fantastic, and the more compact point design makes for more interesting layouts, especially in stations.

However, the setup is longer, parts are more fragile (which was true even when the parts were new) so you don't want to change your layout too often (from a kid's point of view, RC or 9V is much much more easier for that; track geometry isn't always easy to manage (even something as simple as using a pair of points around a 90° turn won't work) (while RC now has the flex-track which basically mean you won't have any geometry problems at all any longer); electric contacts are notoriously hard to maintain in good state (especially if you need to clean up all the electric track inserts you have).

All in all, using 12V is great if you have some, but I wouldn't bother pursuing it and trying to acquire new parts. The good thing is, if you're going to have both together, you'll get a better opinion yourself of how good they play together. In time, you could also consider abandoning 12V altogether, and if you want to go as far as reselling your collection, it shouldn't be a problem.

Frankly, the main issue with RC is the lack of automated points, but even for that there are custom solutions, even pneumatic ones. Signals can't be used with non-conductive track either (using 12V signals on 9V tracks would be very easy though); but with a RC train I'm not sure that makes a lot of sense.

As I have a 3D printer I just printed up a number of track adaptors like this. It works well. The print files are available free from "Thingiverse".

Not the answer you're looking for? Browse other questions tagged trains compatibility 12v or ask your own question.

14
Do regular Lego trains fit onto Duplo tracks?
11
What was the 12v AC socket for on the 7864 transformer?
11
Are the blue and grey 12v train system compatible?
16
What advanced railroad features are possible with the Lego PF train sets?
8
Lego remote controlled cargo train not working
8
Which train motor is more powerful, 9V or 12V?
5
Is it possible to run more than two remote control trains on one track?
5
Can the DUPLO My First Number Train fit on DUPLO tracks?
11
12V LEGO train tracks splinter