Is the NXT forward compatible with EV3 sensors and motors?

Short answer: you can use EV3 motors with NXT, but you can't use EV3 sensors on NXT. NXT sensors and motors work with EV3.

The NXT works fine with EV3 motors, and will read them as NXT motors. EV3 sensors, on the other hand, do not natively work with the NXT, with the exception of the touch sensor.

The reason for this is that, touch sensor notwithstanding, EV3 sensors use a hardware communication protocol called UART, which is not supported by the NXT. The NXT only supports analog and digital I2C. The EV3 touch sensor works with the NXT because it's an analog sensor, unlike the other EV3 sensors.

That being said, it is possible to make EV3 sensors work with the NXT via an EV3 sensor adapter: 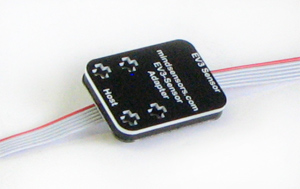 An adapter is required for each sensor port used. Unfortunately, it's not currently supported in NXT-G; just in NXC and EV3-G.

Not the answer you're looking for? Browse other questions tagged nxt mindstorms ev3 compatibility or ask your own question.

23
What are the differences between the NXT and the RCX?
16
Can I use RCX sensors and motors with the NXT brick?
19
Is Mindstorms EV3 backwards compatible?
3
EV3 digital interface with sensors?
7
Compatibility EV3 software with NXT brick - known limits?
5
How to use two NXT bricks for 3+ motors and 4+ sensors?
3
Are NXT Light sensors compatible with EV3?
6
Use legacy RCX sensors with EV3
3
Connecting 2 NXT bricks in order to control motors and sensors from one brick
3
Two motors are driven forward, why are they rotating in different directions?