Is it possible to create a differential if I don't have it as a ready to use element?

I have numerous gears, axis and other elements from different Lego Technic sets. I wonder if using them I can make a kind of a differential like this? 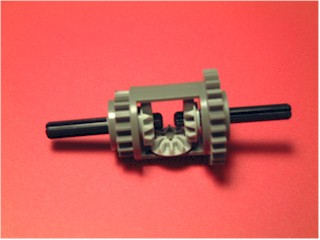 If not, how can I implement similar functionality in case I have two motorized wheels on one axis that can be steered and connected to motor(s) via cardans like this:

This can definitely be accomplished, although it will be difficult to create a differential as small as the dedicated piece that you mentioned.

Some builders create their own differentials for use in larger models because of the inherent torque limits and slippage that the traditional differential and single bevel gears introduce. Here's one example (source) of a differential that can be created using fairly common elements: 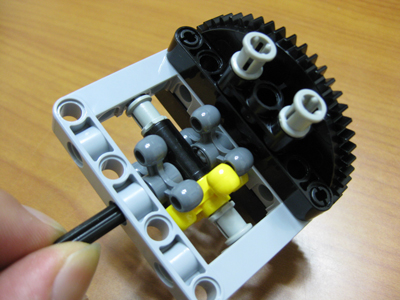 The key is to build the frame containing the three gears and then attach a fixed gear to the frame. The tricky part is finding a gear that can pass an axle through the center without being fixed on it. In the example above, half of a turntable was used, but there are a few other parts that could work as well. Here's the turntable (48452): 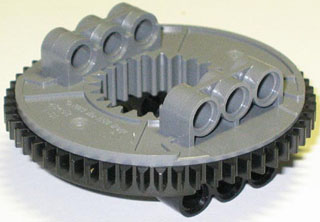 If you are comfortable with modifying your parts, you could also drill out the center of a gear to allow it to turn freely.

Yes - in fact, you can even improve upon the basic design, to create a limited-slip differential.

Here's one by Rob Stehlik, via http://www.technicbricks.com/2009/03/tbs-techtips-22-torsen-differential.html 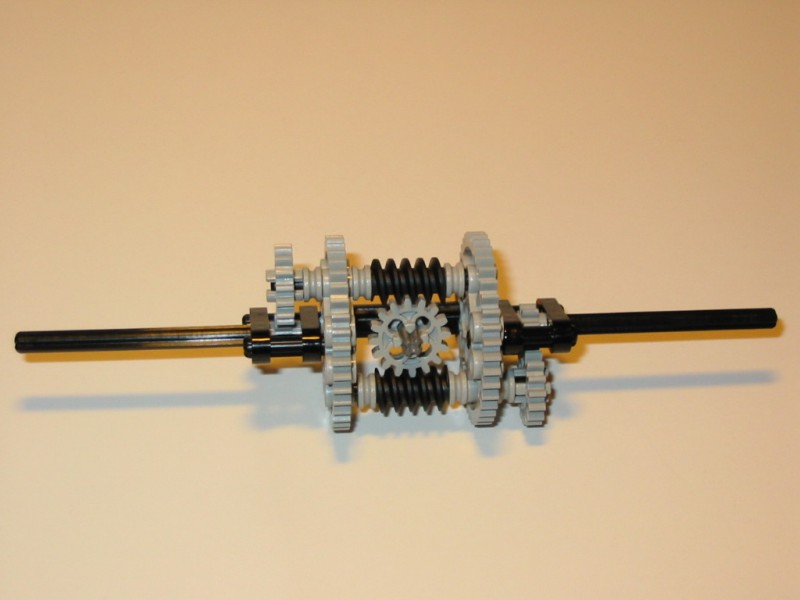 The key here, which other answers don't note, is that the rotating part of the axle does not have to pass through the center of the cog. Instead, here it is offset through the outer holes.

The delicate problem in a brick-built differential is to create the frame. It must have a gear to drive the differential and this gear must let the axle rotate freely. Without parts modification, the only possibility is to use a turntable, either the big one or the small one. Anyway, the solution is bulky and not economical (the differential parts are cheap!). The big version can be interesting nonetheless in large vehicules that require a lot of torque, see here.

8
How to build a limited slip differential?
4
How to prevent my connected axles from falling apart?
4
How to power up MOC-0308, based on Technic 8297 Off-Roader?

19
How would you make a good pivot-arm suspension?
16
Is this element some kind of Technic connector?
13
How to start with technic?
12
How to make a conveyor belt with LEGO parts?
8
Pre-Technic gears?
8
How to build a limited slip differential?
7
Is there any way to connect “sideways” to an axle?
18
Which old Technic set included large yellow motor?
2
Looking for a way to connect SG90 servo motor to Lego Technic hole in a brick, in order to control Lego train tack switch
3
Gearing problem