I'm wondering if you already tried to slow down such a motor. I would like the train to run slower at all the supported 7 speeds. Anyway, at speed 7, the train just flies off the tracks. 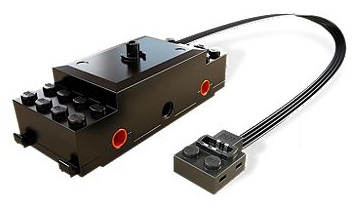 Unfortunately it's direct drive so gearing it down really isn't an option. That leaves changing the electrical system.

What battery are you using? Fundamentally, any change to the electrical system is going to amount to "use a half flat battery", and if you're using a high-voltage battery now the easy option is to switch to lower-voltage rechargeable batteries. But that only works if you're currently using disposable AAA batteries in the 88000 battery box (or 6 AA's in the bigger one that I don't think I've ever seen in a train). If you are, switching to either NiMH AAA batteries or the the Lego LiIon battery pack 8878 will give you the effect you want.

Based on Philo's extensive comparisons but it's the speed/voltage graph that you probably care about more:

What you want to do is lower the voltage at each setting of the controller, and that means adding a resistor in series with the motor.

If you're currently using rechargeable batteries, the only option I can see is to modify the motor or IR receiver. It's just adding a resistor in the cable, so it's relatively easy to do and also to undo, but it's going to look messy and it will be more fragile than the unmodified item. If you're unsure (which I assume you are, since you're asking here rather than just doing it), it's probably better to buy an extension cable and modify that.

Your motor draws about 1.3A when stalled, and from the speed/power charts lower down, about 0.4A when running. I'm going to guess you want to lose about 1V from the 7V output of the receiver, so you need about 1/0.4 = 2.5Ω. Since that Needs to cope with about 1A, it would ideally be a 3W or 5W resistor but you can probably get away with 1W. I suggest using 2, 5Ω 1W resistors in parallel since resistors typically come in 1W and 5W sizes, and in 10% increments so you actually want 5.6 ohm. RadioShack sell them, as should any other electrical part supplier.

Again, Philo explains what the wires do (2/3 down the page), and the easy way to do this is to put the extension between the battery and the IR receiver. That way you put the resistor on an outside wire of the four. If you can solder the resistors in place it'll work better, but if you can't just stripping the wires and twisting them in place then holding it together with tape will work.

When my train was flying off the tracks, I solved the problem by adding more cars to it, or adding extra weight to the existing cars.

Whilst that element is designed to be a "direct drive" system, you could try lifting it up and then stacking some gears on it - however you're going to have some issues with the width of the train/wheels and the track gauge and the amount of gearing you can reliably use because of the size of wheels.

In other builds I've seen, the builders have used the smaller motors and some bevel gears to transfer the power correctly.

Not the answer you're looking for? Browse other questions tagged trains motor power-functions or ask your own question.

7
9v and Power Functions Hybrid?
5
How can I prevent my train from derailing?
6
How can I stop the LEGO Cargo train 60052 wheels from skidding on track?
8
Running Power Functions Train Without IR Receiver/Remote
3
LEGO Mindstorms Motor Power
5
Electric train set not working - even though the light is on
2
EV3 motor control proportional to another motor when more than two motors
4
How to make Lego Mindstorms EV3 robot go in reverse when move steering input comes from proximity sensor
3
XL motor and M motor on IR receiver = same output?