Have a 3001 part i have come across with a color i've never seen before. It seems to be a milky white but with glitter in it. New style logo with pip on short side.

Any ideas to where it came from?

According to a comment from Jan.k 1974 on the source you mentioned (in your comment to 62Bricks answer):

The milky white brick dates to 2005 and has been been made exclusively for the Allianz Arena (Munich soccer stadium) model in Legoland Günzburg. I remember they sold spares of these in packs of 5 for 1.99 after the grand opening

This is confirmed by Maxx3001 in reply (emphasis added):

[…] that's the left brick with slight sparkle in it.

At the time of posting, ND Toys was listing these at $2.39 on BrickLink under "Milky White" with the description:

The arena, and the milky white bricks can be seen in this shot on the LEGOLAND website: 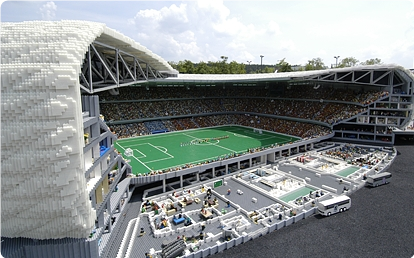 You may have what is commonly called a "test brick." Many of these were manufactured by the Bayer company in Germany. LEGO had Bayer test various designs and colors for their evaluation before deciding whether to put them into regular production.

One recognized authority on these bricks is the collector Maxx3001, who documents his extensive collection on Flickr. In his comment on this trans-red glitter test brick, he makes reference to the existence of milky white glitter bricks. He may be able to give you more information on your brick.

3
How can a brick/color combination exist but not be part of a set?

9
Colouring bricks with the sun
3
How can a brick/color combination exist but not be part of a set?
5
Quality issues with tan-colored Lego pieces?
3
Do WHITE LEGO elements fade or yellow while sealed for years, or do they stay their perfect white original color?
6
Will my mighty white rocket yellow in direct sunlight?
15
What was the shortest-lived color?
2
Sell bulk by colour or by part or by both
6
Colour matching LEGO colours with paint
6
Has the colour "White" changed over the years?