I am designing a rather large Lego structure and I could swear that I have used 2x12 bricks (not plates) in purchased sets. I know there is a 2x12 plate in existence but don't see any bricks online through Pick-a-brick or in the Digital Designer 4.3

However, in the Digital Designer program there are two (2) 2x8 bricks then a 2x10. So I'm wondering if maybe there is an error in the parts for digital designer, and there is actually suppose to be a 2x8, 2x10 and 2x12.

Thank you for your time. John

There used to be 2x12 bricks a long, long time ago:

There are plenty of legacy parts that aren't included in LDD, and it looks like this is one of them.

This part dates all the way back to 1954. I don't think that they've been used in a set since then, and I don't think they were updated to use tubes on the underside or to not have slots in the end. I don't personally have any of these, but I'd also guess that they were never released made of ABS.

That's the answer to your question, but to help you solve your problem, it is often useful to use large Technic beams when building the framework of a large structure. These are long, sturdy, and can be pinned together to form very long beams. You could pin together 2 2x12 beams in order to get the brick that you're looking for. Technic beams come as large as 1x16, so you can create some really nice beams with these. 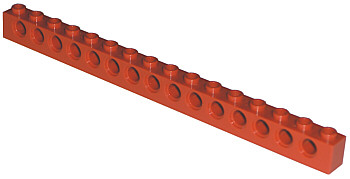 Not to my knowledge. Sorry buddy.

18
Are there any mirrored LEGO bricks?
87
What are the dimensions of a LEGO brick?
17
How much does a LEGO brick weigh?
9
does Lego make bricks with a stone, brick or concrete block design?
13
What LEGO brick is available in the most colors?
1
Is there a listing of the Types of LEGO blocks?
4
Opposite brick of Brick, Modified 1 x 2 with Studs on 1 Side
4
Is a brick with a smaller Lego logo real?