How to connect chain links to the axle

In my project I want append two 21 chain links to the axle 12. Is this any axle connector with knob ending?

You probably want something a little similar to this: 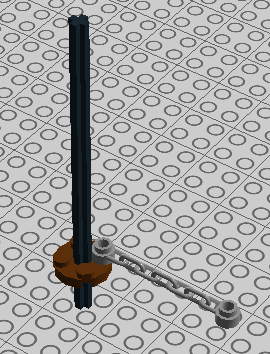 There was a similar setup in the Bespin Cloud City scene that used a string attached to two studs that was wound around an axle in the same way.

As Phil B. suggests, adding an additional round plate on top of the chain will provide you with a bit more support for the stud, at the possible expense of making the winding thicker - it will tend to wrap around the plates then.

15
How much tension can I expect to get out of a lego chain before it starts to give away?
9
What part(s) can I use to connect modules at a 90 degree angle?
4
How to connect chain links in LDD to make tank tracks
1
How to remove an unslotted length-2 technic axle from a one-way axle hole?
7
Is there any way to connect “sideways” to an axle?
7
Does a 1x3 Lego technic liftarm with two round holes and one axle socket exist? (for tank suspension usage)
11
What are the dimensions of a technic axle?
7
Harley Davidson chain belt running jolty
4
Which parts have no-friction Technic axle holes?