Has anyone automated the LEGO hand sorting process beyond "pawing & piling"?

I need to rephrase my question. Has anyone built or used a large pigeon hole/ chute/ bin collection system to sort LEGO elements? The sorting system doesn't need to be made of LEGO bricks. I just want to know if any of you studio builders sort your elements in a more organised fashion than the average fan. I'm trying to figure out if this is a project I should take on, or a boondoggle I should avoid...

While they won't do the sorting for you like that clever youtube video, there are a couple of commercial sorting products that can help you bulk-group your legos by size as a preliminary sorting mechanism, through differently-sized grates.

Box4Blox has been around for a while. Good review of it at Brother's Brick.

Lego has recently produced their own similar Sort and Store shaped like a minifig head: 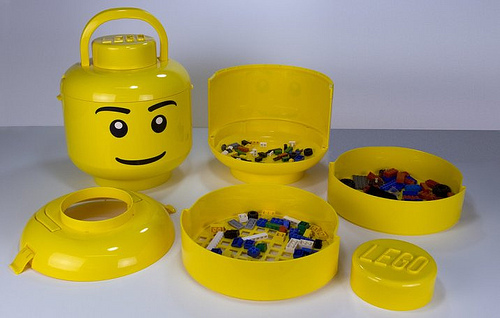 At our house we organize by color, and have a large bucket of each (mostly because its easier for the kids to help maintain the organization, hypothetically anyway...). I've toyed with the idea of getting one of these, pouring each color bucket through, and ending up with convenient size-groupings within each color. Should be much easier to find what we need.

I have a fairly large collection. Processing bricks is a lot more pleasant with my homemade device, which is vaguely similar to the devices above, but made from MDF.

Note that the commercial products have holes that are square, not round, so the size of bricks that is blocked by them is kind of variable. My sorter has two sorting levels, one with 30mm holes and one with 15mm holes. Because LEGO bricks are 8mm per stud, nothing 4x4 or over falls through the top level, and nothing 2x2 or over goes through the second. I could have done 22/23mm holes for 3x3s and 7mm for sub 1x1s, but empirically they're rare pieces and not worth the effort. The holes are laid out in a hexagonal grid, on a sheet of MDF large enough to cover - and fall straight through into - my storage boxes (450mm square, as that's the size the sheets come in). Spacing of the holes and thickness of the MDF was selected to ensure strength - MDF doesn't distort too much before breaking, and using MDF was important because it's cheap, common and unlikely to damage the bricks. There are sides to each tray to prevent spillage, and nodes on the underside to lock each layer into the one below.

The hardest part in constructing my sorting trays was finding drill bits for making 30mm and 15mm holes; I found only one 30mm spade bit in my local hardware superstore, and I had to go to a commercial tool supplier for the 15mm bit. I also needed a new drill, as my existing one couldn't spin slowly enough to make round holes with a spade bit.

So, here's the entire unit; you can see the sides to hold a reasonable amount of LEGO without spilling over: 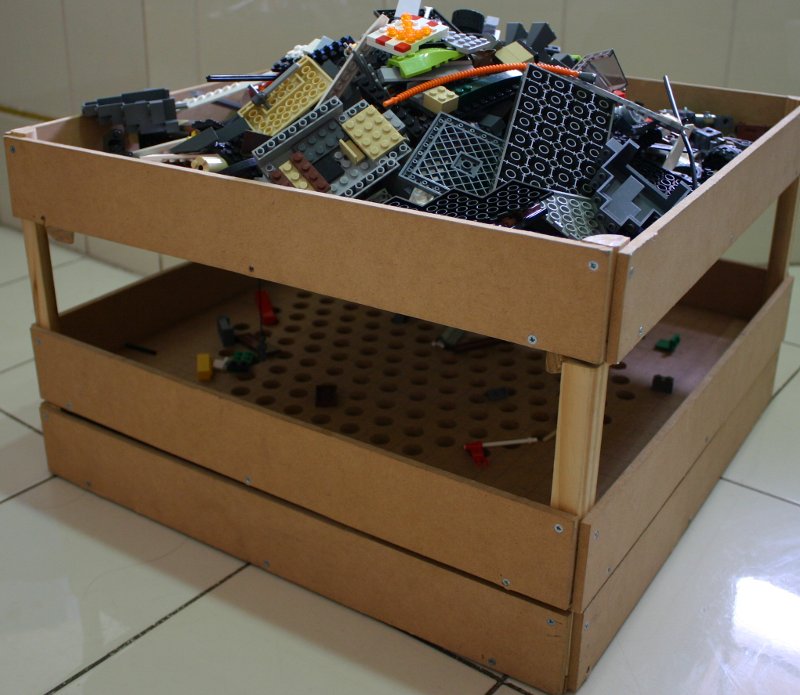 And here's what LEGO swamping the 30mm holes in the top looks like. Most of the time I'm operating at this level; the second level can contain a large number of pieces given they're so much smaller. 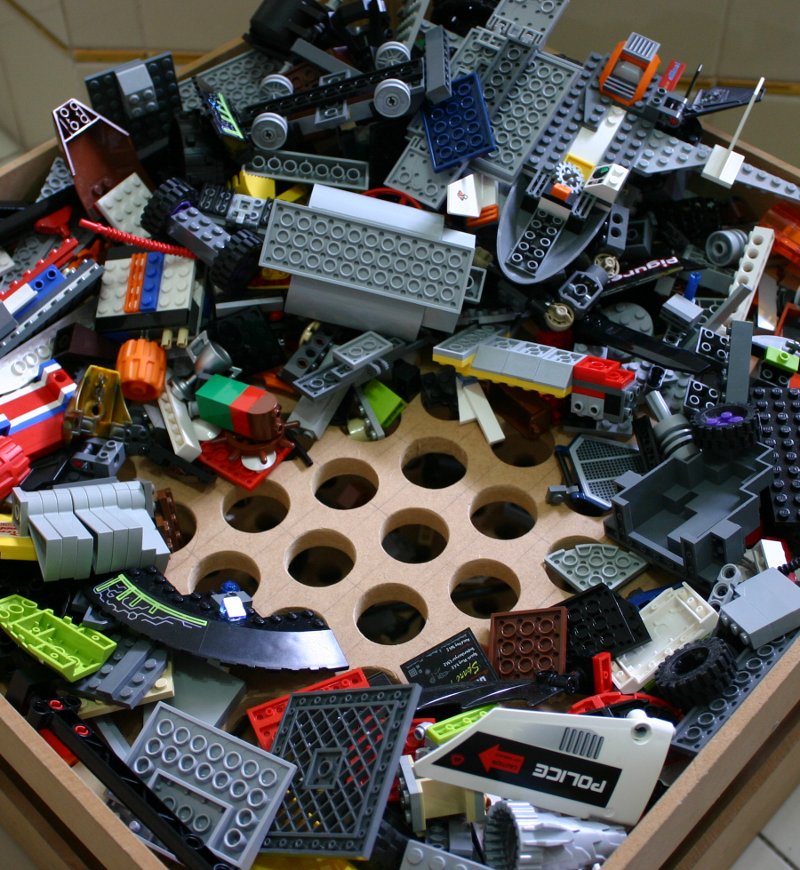 The second level gets the smaller parts falling through while you're pawing through the top tier. You can see the spacing created by the tall corner posts, this is to allow a 2x16 plate (the longest part I'd expect to process - 128mm) to fall through if it wants too - but typically something that long won't fall from the top level, as its lowest centre of gravity lays it flat and so the great length won't fit through the topmost holes. If one were to slip into a hole, it could be raked into a position to fall, so about 10% or 20% of pieces as large as this fall through to this level. 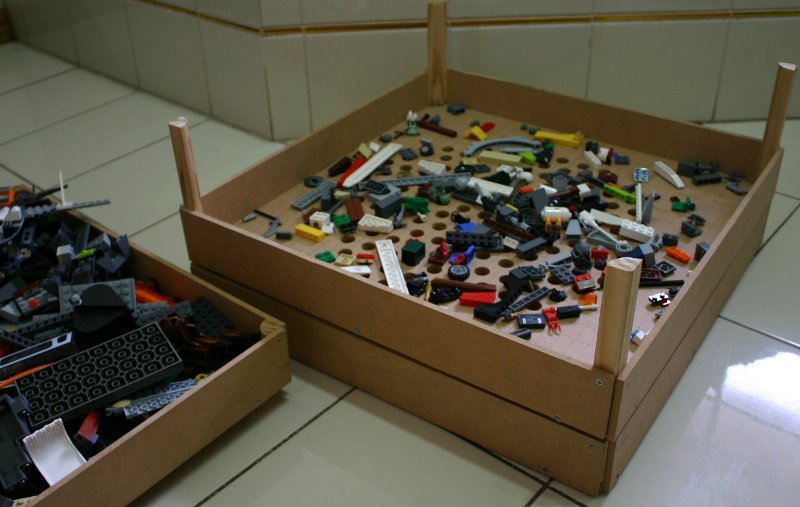 The small detritus finds its way to the bottom level 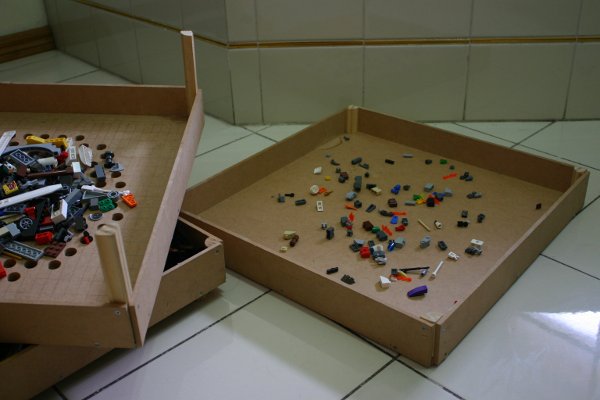 Here you can see the locking nodes that prevent the tiers rotating and moving off the tier below. 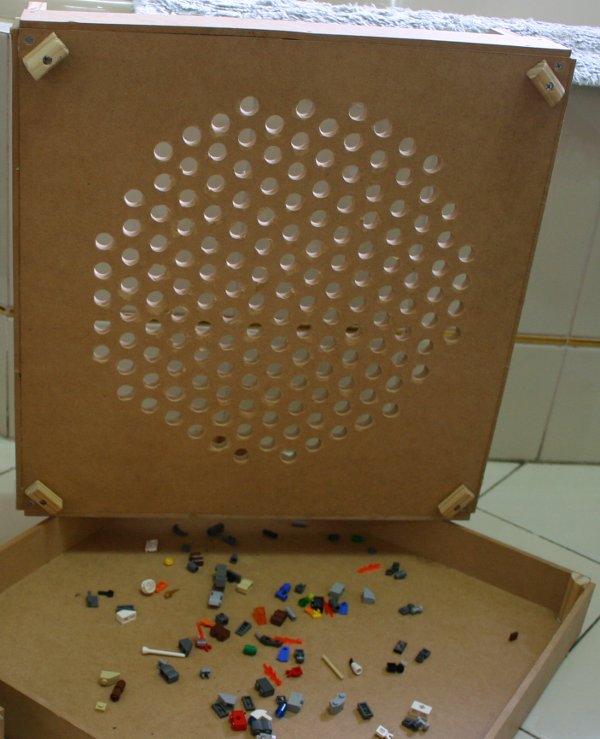 Prior to building this I experimented with a number of designs and found that they had a common problem of clogging up. This experiences that to some extent too, but has a vast number of holes to minimize the impact, and a finger poked up from below can clear the blockage. Radar dishes and large cones, for example, are good at filling holes.

I do have a tumbler to separate out plates and other small items from bricks, but it requires a lot of work to cause the separation so I wouldn't recommend it as a sorting tool. I could supply an image for those with an academic interest.

I showed my device at my local LUG, and a year or so later another member went and made his own tennis-racket inspired LEGO sifter. I humbly suggest this device suffers from the same problem with square (or sometimes triangular) holes that the commercial devices exhibit. 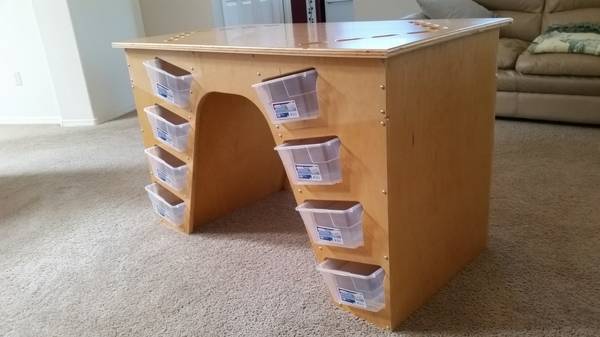 I designed and built a lego sorting and storage desk for my son late last year. It has 16 bins and 16 corresponding holes in the top. It also has an interior baffle system to keep lego pieces from jumping into incorrect bin. I had to go through several designs to get it to work right, be ergonomic (all drop slots within reach while seated), and make it easy to assemble.

Although I have patent pending on the design, someone with reasonable skills could come up with their own version for personal use.

The table works well, but it is designed for center-of-room use to allow access to all the bins. My son and my wife often sit opposite each other at the desk while sorting to make things go more quickly.

We sort by type mostly, with simple combinations of blocks sorted to one side of the table, and non-block type pieces to the other.

Here's a video I found, featuring a fully automated LEGO sorter made out of LEGO itself:

Keep in mind that the time it takes you to build and use one of these is probably greater than the amount of time it takes to sort by hand.

I don't think slots would work great as the bricks could fit into multiple shapes/sizes of holes. One thing you could try is a "panning for gold" method - put pieces in a bowl and swirl them around. The heavier ones should fall out. Don't know how well it would work, but it is worth a shot.

Yes. Jacques Mattheij made a pretty awesome machine using some feeders, machine learning, and air blowers to sort out the top 1000 parts by popularity. It looks like he's well on his way to sorting two metric tons of bulk LEGO: https://jacquesmattheij.com/sorting-two-metric-tons-of-lego

More discussion on Hacker News, including a bunch of comments by Jacques under the handle jacquesm: https://news.ycombinator.com/item?id=14226889 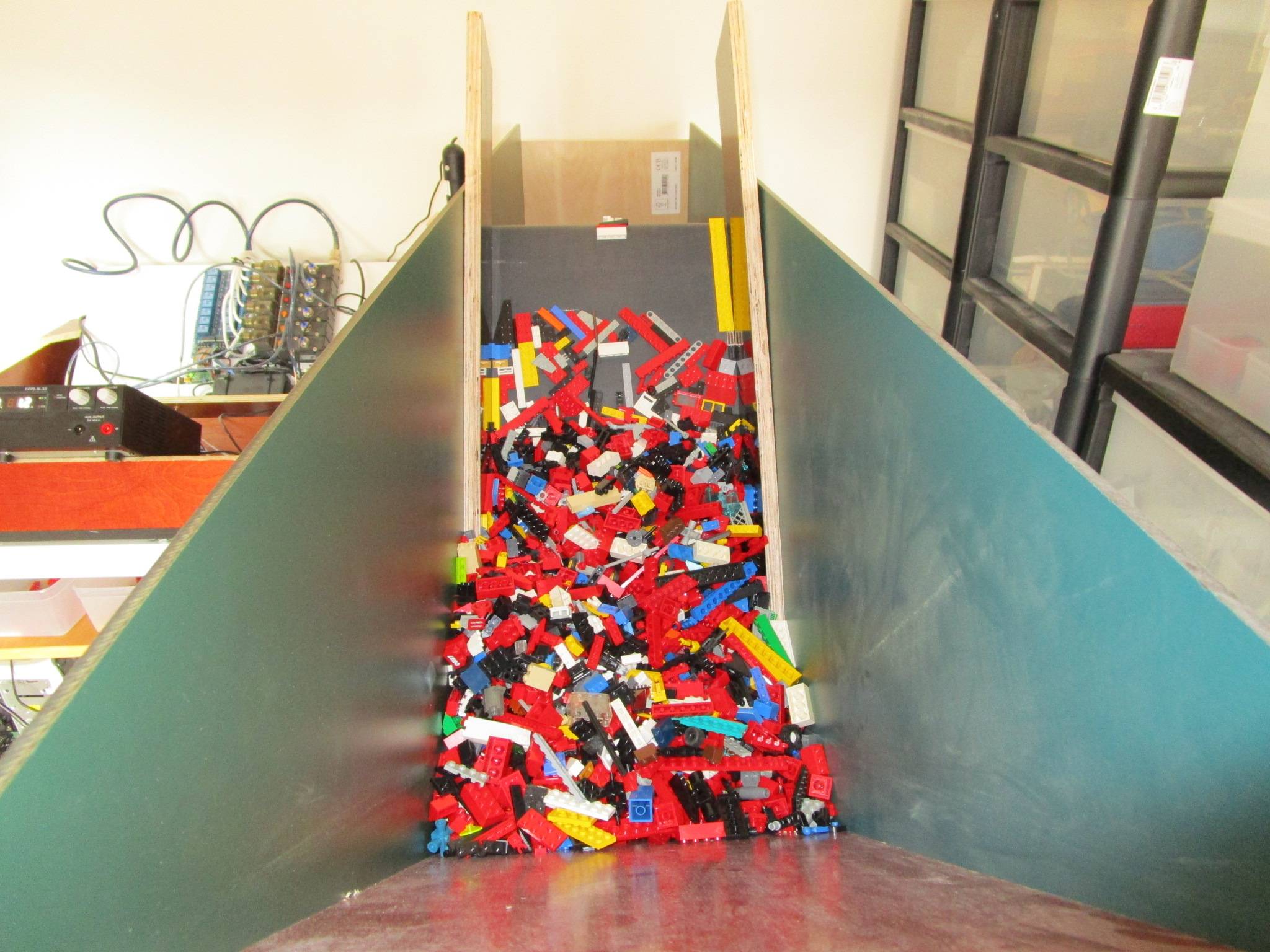 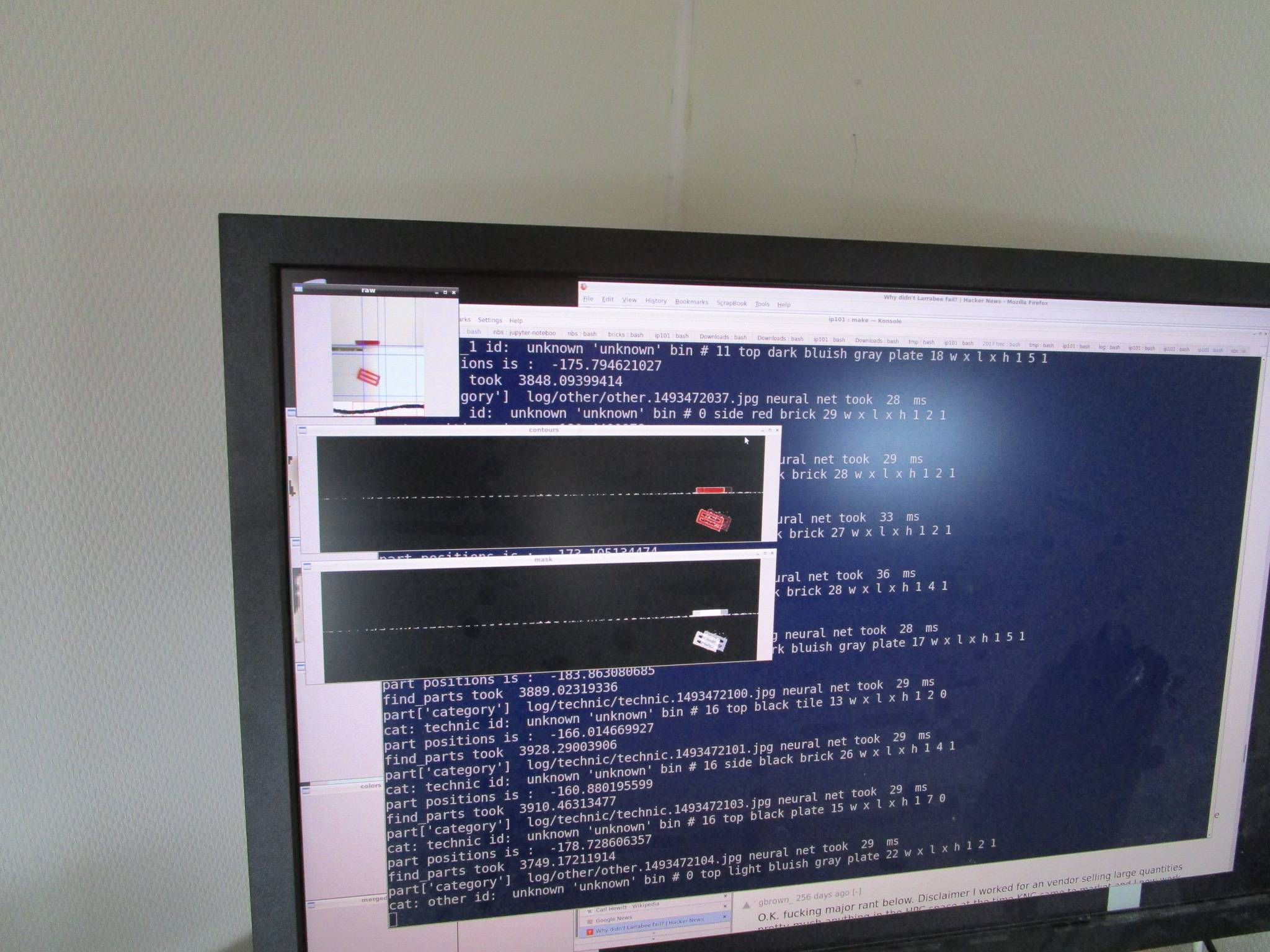 We have a small business sorting LEGO for customers (www.brick-sort.com)... and we've tried many different machines. Bottom line is that, unless you're dealing in tens of thousands of parts, Pubby is right: "...the time it takes you to build and use one of these is probably greater than the amount of time it takes to sort by hand." I think people forget about the "using" part of this. Someone has to stand there and shake the basket. Someone also has to break-apart the bricks. I find that our minimum wage labor does the job much faster.

When sorting by color, yes, it helps to have a table with a big hole in the center where you can toss the bricks (a bucket underneath catches them). The problem with collection trays affixed to the side of the table is that they fill-up quickly.

The most promising approach that I have seen is being used by LETZGO (http://www.letzgo.co.kr/home) a Korean start-up that aims to make Lego affordable by offering Lego sets on a rental basis. Naturally the rental process makes sets liable to lose/damage pieces and so they appear to have developed an automated process for sorting and to verify the integrity of sets.

There is footage of the system in action here: https://www.youtube.com/watch?v=1WD1sM-b2Qc

It sounds like they may be considering open-sourcing some of this system (https://www.youtube.com/watch?v=Ck7IOx2Pp3c). Show your appreciation and share some love with the creators! (and cross your fingers they are willing to share their work!)

An automated Lego sorting system developed by the global Lego community would truly transform the hobby of Lego! 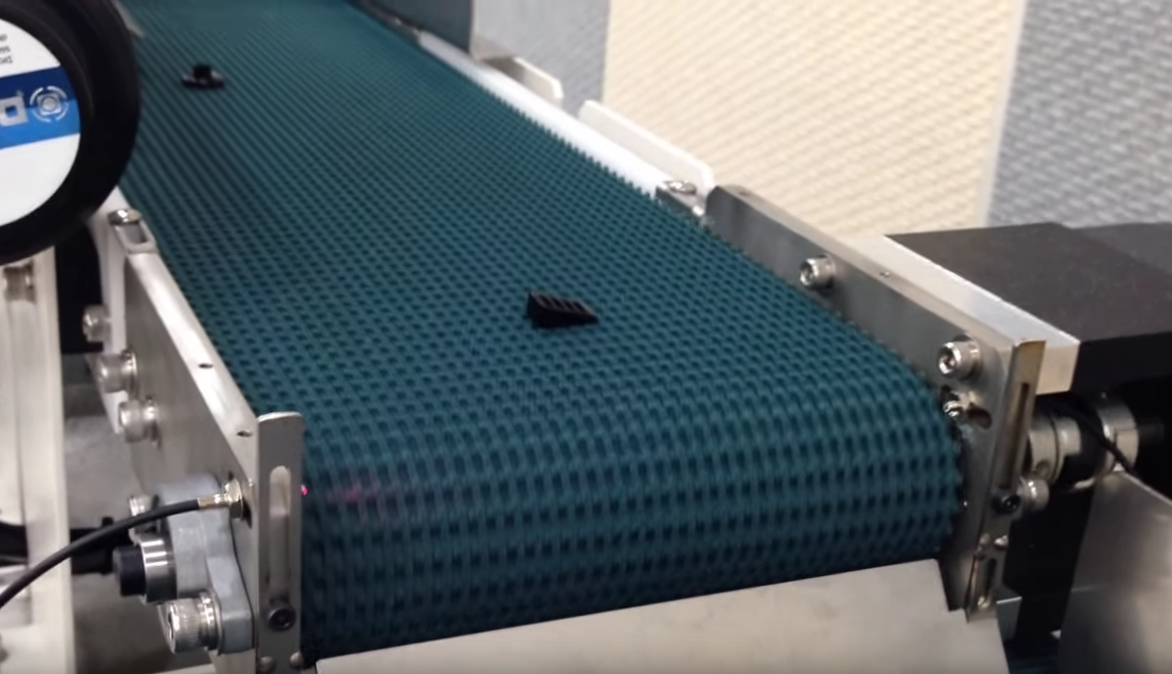 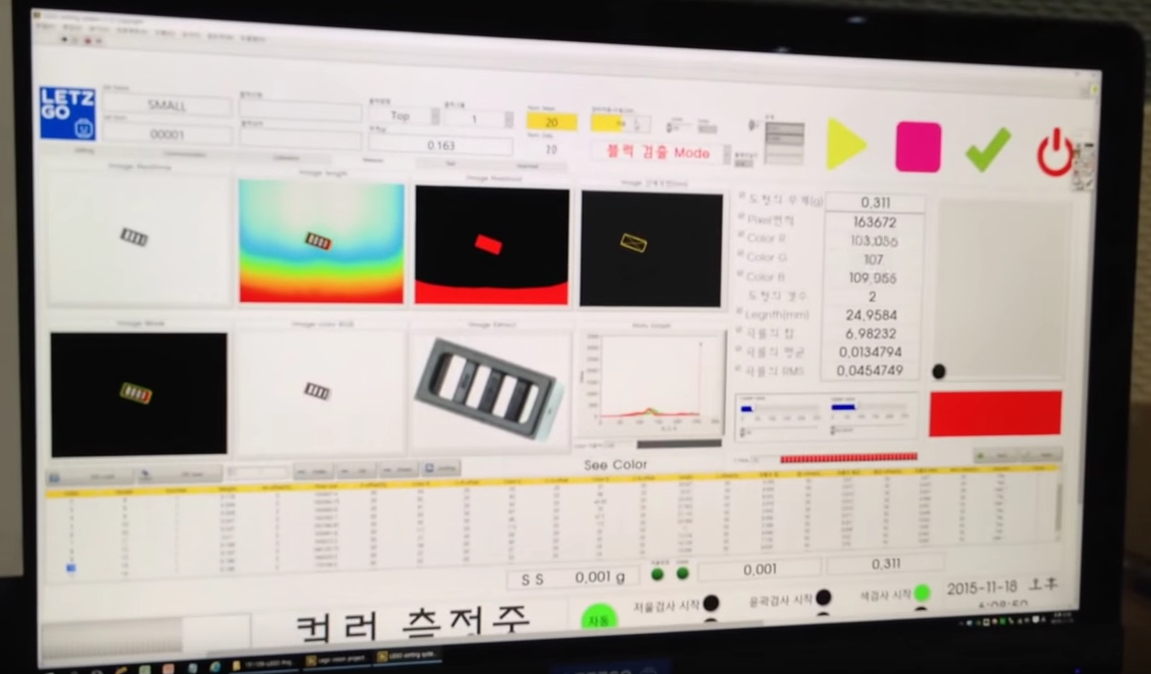 You and I arrived at similar solutions. I used plastic buckets to sort by size:

Not the answer you're looking for? Browse other questions tagged organisation or ask your own question.

0
What is the best way to sort LEGO bricks?
39
What are proven methods to sort/categorize a large number of parts?
14
Does anyone have any successful techniques in searching for lego bricks in a pile?
13
Quick way to inventory parts