Can anyone find a photo of the "LEGO bricks, not LEGOS" insert?

Debates aside; I have been told that there used to exist a message either in Lego catalogs or inserts in boxes that reads as this:

The word LEGO® is a brand name and is very special to all of us in the LEGO Group Companies. We would sincerely like your help in keeping it special. Please always refer to our bricks as 'LEGO Bricks or Toys' and not 'legos.' By doing so, you will be helping to protect and preserve a brand of which we are very proud and that stands for quality the world over. Thank you! Susan Williams, Consumer Services.

Does anyone have a photo of this insert or catalog text that they could share?

Here you go, from a scan of a 1985 catalog at Retroist. (I'm still looking for a version without the Retroist URL smeared across the bottom.) 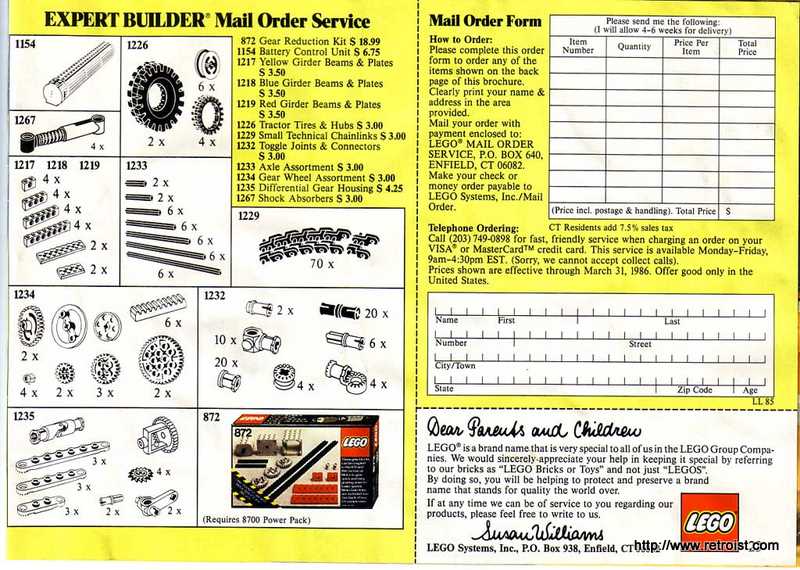 LEGO® is a brand name that is very special to all of us in the LEGO Group Companies. We would sincerely appreciate your help in keeping it special by referring to our bricks as "LEGO Bricks or Toys" and not just "LEGOS". By doing so, you will be helping to protect and preserve a brand that stands for quality the world over.

If at any time we can be of service to you regarding our products, please feel free to write to us.

The text you quote above is slightly different and may be a variant from a different year, or perhaps it's just slightly misremembered.

It's from one of the "mini-catalogs" that came with the sets, so this was both a catalog and a box insert.

I don't have a picture of the insert, but according to Matt Hamilton on meta, a very similar notice was once at the legos.com URL: 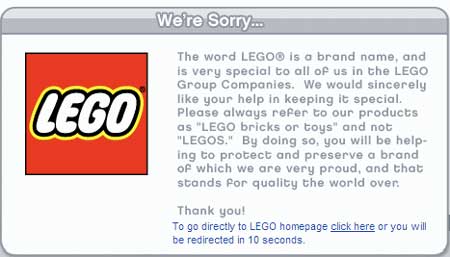 There is a page on the LEGO web site about Fair Play which is very much available and not "used to". The wording is a bit different, though:

If the LEGO trademark is used at all, it should always be used as an adjective, not as a noun. For example, say "MODELS BUILT OF LEGO BRICKS". Never say "MODELS BUILT OF LEGOs".Also, the trademark should appear in the same typeface as the surrounding text and should not be isolated or set apart from the surrounding text. In other words, the trademarks should not be emphasized or highlighted. Finally, the LEGO trademark should always appear with a ® symbol each time it is used.

The page also links to a brochure which is certainly worth reading (although it's not quite what you requested).

Edit: as far as inserts in actual catalogues go, I don't really remember seeing any. Iv'e had a look in the book 50 Years of the LEGO Brick which contains copies of a few older catalogues, but didn't find anything.

It's also interesting to know that in that book itself, LEGO is usually written without the trademark ®, and that quite a few times is is used as a noun as a shorctut for "The LEGO Company".

16
What sizes of bricks (building scales) have carried the Lego brand name?
11
How can one find old archived issues of LEGO Mania Magazine?
4
Does the LEGO company actively follow or copy clone bricks?
7
Has TLG ever produced bricks without the LEGO branding?
9
Are these ATC bricks from the 1970's LEGO?
4
Does anyone have a picture of the Lego Club alphabet code from Bricks and Pieces magazine?
8
Did LEGO ever make bricks without the LEGO logo?
11
Which parts do not have the LEGO logo stamped on them?
1
When did bricks start to have the LEGO Group text engraved on them?