I'm working on making sure I have all necessary pieces for 10179: Ultimate Collector's Edition Millenium Falcon (a painstaking process, to say the least). I received the set not entirely complete, partially disassembled, and without directions.

I'm using the PDF of the directions to sort and count the pieces, and I can't figure out what this piece (4211642 on the bottom) is supposed to be: 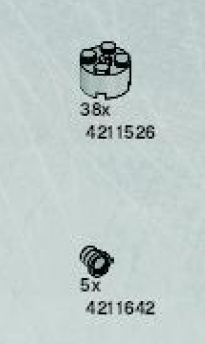 I don't have anything left over that appears to match, and the part number isn't of any help. I've even paged through the instructions to see where these five mystery pieces are used, but can't seem to figure it out. Can't find it on the Peeron parts list.

The PDF is of annoyingly low resolution. Can someone with a printed copy help me out here?

According to the LEGO customer service, this part is a "BUSH Ø7.84" (which is of no help whatsoever, as with most LEGO internal names) and has the design ID 6221. Unfortunately, there seems to be no official picture for it yet.

This design ID corresponds indeed to the part which Joel Cohen and BradC have identified; the element id of the same part in black (622126) as found by BradC follows the old convention design id + color id (26 being Black at LEGO). And this part at the LEGO customer service does have a big image which would clear all doubt if we had any left: 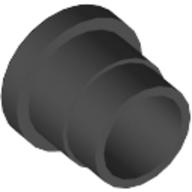 LDraw and Peeron know this part as 424 - Technic Handle. BrickLink does too but refers to 6221 as alternate item number. This happens often with parts which have no markings whatsoever and for which the official LEGO design ID wasn't known at the time the part was added to the LDraw library.

Why the inventory at both Peeron and BrickLink misses it is anyone's guess, but it's one of the biggest LEGO sets ever so it's bound to have mistakes. Although I see the list for Peeron has been provided by LEGO itself, so it's a bit weird.

Is the part actually used somewhere? I don't have the strength to read the whole manual.

I think Joel Cohen's comment is correct, it looks like a "Technic handle/hub" (escalating to an answer so I can include pics): 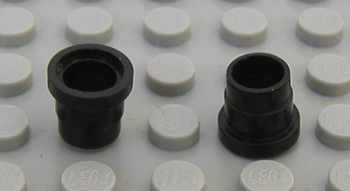 Here's a similar-looking view from the parts list of set 7703 Fire Vulture:

and a portion of the instructions from 7476 Dino Attack that shows how it is used: 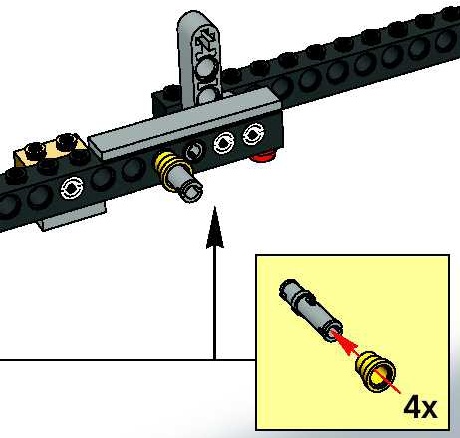 So if this is correct, it appears to be a mistake (or misprint). Can someone confirm for me if this piece was included on the parts list of the actual printed manual? Perhaps the PDF was made from an earlier test build?

I'm currently doing an inventory of many of my son's Lego sets, including the 10179 Millenium Falcon set. The search for this 4211642 piece is what led me to this site/thread in the first place :)

Wanting to double-check, I went through the whole manual to see at which step this 4211642 piece would be needed but, unless I'm totally blind, I haven't seen it anywhere. So at this point I think it's pretty safe to assume this is a misprint in the official manual and its PDF counterpart.

I'm trying to assemble the 10179 set by buying the individual pieces, since the prices for the set are outrageous. I put the inventory of parts from the PDF version of the manual into an Excel spreadsheet to track piece counts and prices. The total number of pieces comes out to be exactly 5200. If you subtract 5 for the 4211642 pieces that are listed but apparently not included or used, that leaves 5195 pieces, the official piece count for the set. So, my guess is that the 4211642 pieces are not supposed to be in the set.

Well, I have the Falcon and I can confirm that those pieces are not included on this set. That print appears on my manual too, therefore it is a simple print mistake. I have built the Falcon three times (only for enjoying) and those pieces still hide somewhere, on the abbism of the box, so don´t worry. You have all the pieces. 😊

You may want to use the bricklink inventory for the set. But looking through that, I don't see a part with quantity 5 that looks anything like that.

26
Have any Lego sets been released with errors/mistakes in the build instructions? If not, why not?