How can a Mindstorms robot lift something very heavy?

I have a small LEGO Mindstorms robot and it needs to lift heavy objects, but it doesn't seem possible because the motor cannot bear the load. What methods or mechanisms can I use to make the robot stronger?

I'm assuming that you meant "the motor is not powerful enough".

Surely you can use a gearing ratio & leverage to assist? Essentially you want the motor to turn many times for each small amount of distance traveled by the lifting arm. This means a small gear on the motor and a large gear driving the lifting. You may need to connect several gears together to get enough of a reduction, like the graphic here.

With a range of pulleys and gears you can build something capable of lifting as much as 100 kilos with LEGO parts, albeit at the risk of putting enormous amounts of stress on the bricks! 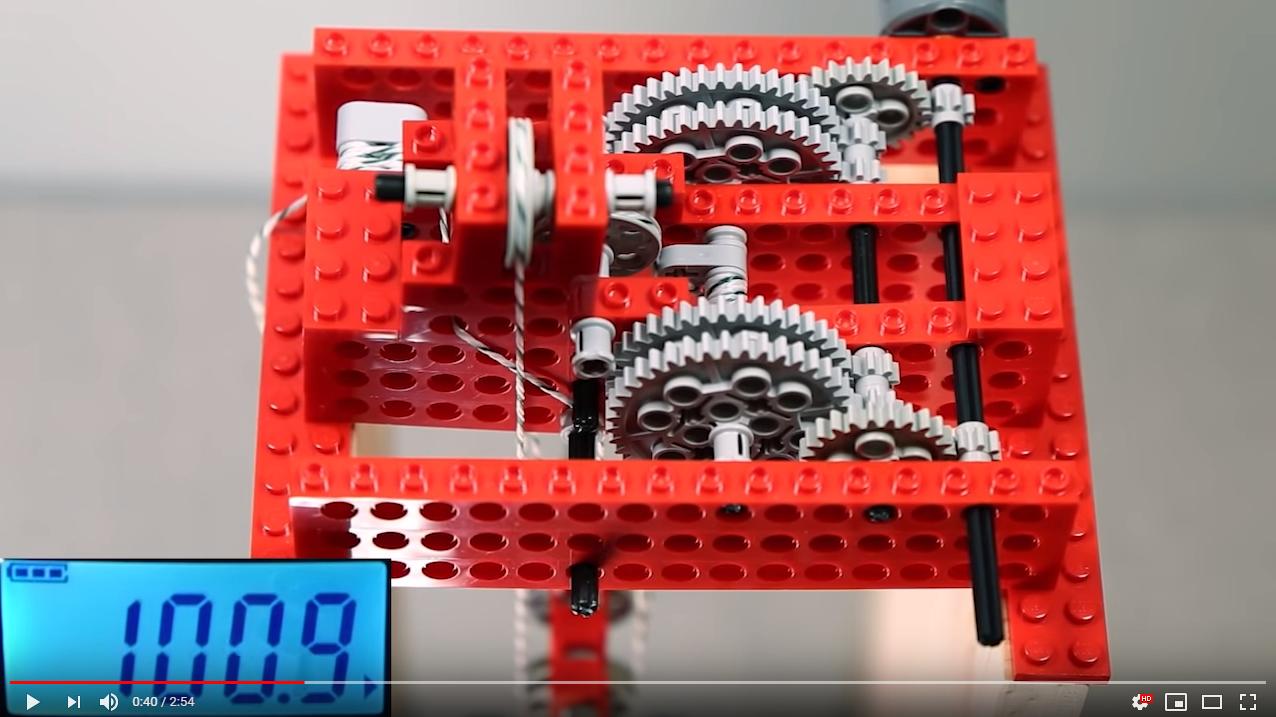 Using a small gear to power a larger gear (gearing down), you can greatly improve the torque (rotational force) at the cost of reduced speed. Gear transmissions are favourable to belt pulley system as the teeth of the gears prevent slippage under high loads.

The motor may struggle with too many gears as the level of friction increases.

Ratchets (consisting of a pawl and a gear) are a mechanical device used to ensure rotary motion only proceeds in one direction.

These are notably present on roller coasters where you can hear the audible click of a pawl catching a gear as you ascend a lift hill. If the motor or cable should fail, it acts as a safety measure to prevent the coaster from falling back down the hill.

Ratchets will reduce strain on the motor at the cost of putting more strain on the ratchet and limiting the direction of movement. To reverse the movement, the pawl would need to be disengaged in some way.

Consider how you can use alternative forms of power, depending on your design however using anything other than an electric motor may not be appropriate.

If you aren't concerned about producing instant motion, think about ways to store and conserve energy. An advanced solution would be to use a solid or fluid as a counterweight. Perhaps using the motor to pump water from a reservoir into a container that can counterbalance the weight you are lifting?

It is essential to identify weak links and reinforce them structurally. Ensure that parts that parts do not move unless required to. Avoid using long axles/bricks that are prone to bending as well as old/damaged pieces.

Are you able to use more motors to share the strain of the load? If so, ensure that the construction is well balanced and each motor contributes equally (same gear ratio).

Consider using mains power to power the motors if possible. Motors using batteries will have reduced power in relation to the power left in the battery.

Try adjusting the torque. If that does not work for you, then use a large motor to help out.

Not the answer you're looking for? Browse other questions tagged mindstorms technic motor or ask your own question.

5
What can cause programmed NXT 2.0 motors to misfunction when small resistance is applied?
10
How can I remove a rubber band from a pulley?
16
How to use Power Functions with Mindstorms EV3?
6
How can I use 1 motor for grabbing/lifting and another for moving?
7
Long train Bridge tension and compression angles (minimum brick count)
3
Linear Actuator Clicking
1
Program for NXT golf robot not looping properly
6
What is the quietest LEGO motor?
4
Where do I find the program to go with the LEGO 51515?