I own a few X-Pods and want to play the X-Pod "Play-Off" game again. While I want my game pieces to look neat, I also want to win.

Does each X-Pod have the same chance of winning? If not, then I would be interested in knowing which one is superior.

It's been a while since I've played, and looking at the strengths and weaknesses of the individual pods does seem to make them look fairly equal. However, I distinctly remember that some sets had units that gave a slight advantage over other sets, at least for my style of playing. 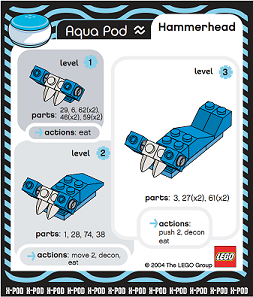 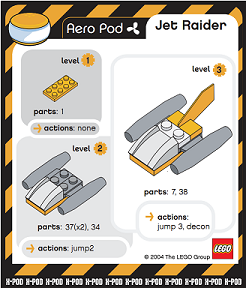 In several games between these two Pods, I was able to win by moving next to my opponent's unit, battling till he was down to level 1, and then just eating him, thus raising the level of my unit back up by 1.

It may be that certain combinations of sets are more equally matched than others, or it could be that I was just better than my opponent :)

(For a copy of the rules, starter kits, boards, and strategy guide see this question.)

The Advanced Rules and the Advanced Strategy Guide give a few pointers that can help your game.

For building a board, the Advanced Rules suggest:

You should probably have at least 5 obstacles and no more than 9 for a balanced game.

As for strategies, they vary based on the abilities of the Pod you have chosen, and your opponent. (For complete strategies for each Pod against all other Pods, see the Advanced Strategy Guide)

Using Obstacles to Your Advantage

The chief advantage of the Aero Pod is that most of its units can fly or jump. This means that yellow units are much less restrained by obstacles than units of any other Pod. On an arena filled with obstacles, Aero Pod units are, at their best, able to avoid getting boxed in and to score quickly. On less blocked arena, the Aero Pod has less of an advantage, but its jumpers and fliers can move over enemies, while its raiders can move through them.

Similar to the Wild Pod, the Aqua Pod has a well-balanced set up units and a few different strategies from which to choose. Pay attention to what team you’re up against to determine your strategy. Fast opponents require deconstructing units that have block them at choke point; slow opponents should be outrun with quick moving and jumping units. And don’t forget about your eat ability. Eating gives you an edge in deconstruction stand-oﬀs, so be sure to have some level-one units of your own on the board to rebuild and preserve your powerhouses.

Getting the Opponent in your Web

Arachno units are pretty quick, so you’ll probably want to play an aggressive game where you try to score early and often. The web ability is a great aid to this strategy. Since web has a range of two, you’re able to maneuver your units easily to freeze opponents before they get near you. Use web to incapacitate oncoming units and either zip your faster units by to score, or moving into your deconstructing units to ﬁnish the job. Arachno works particularly well on open boards, where you can web opponents without blocking oﬀ your paths to the opponent’s row.

Auto Pod has the fastest units in the game. It has very few jumpers or ﬂiers, but it makes up for that lack in raw speed. What this means is that an Auto Pod player has a good chance of getting control of the board and scoring points earlier in the game. This strategy works best on open boards with few obstacles to block your units' movement. On more crowded boards, Auto Pod players have to rely on their pushing, carrying, and limited deconstruction abilities to break the opponent's line and create a path on which to score.

The center of a Dragon Pod team is its dragon unit. These four level units are easily the most powerful in the game, so using them eﬀectively is the key to victory. First, the number of units you can use with any individual dragon is limited, so picking a dragon will basically determine your strategy for that board. Your secondary units are fairly weak, so use the dragon aggressively and don’t be afraid to lose a level if it means taking out a key opponent. Still, be sure to have a couple good back-up cards and maybe even some Build and Place X-tras in case the dragon goes down.

Monster Pod is a slow, steadily moving team with a powerful special ability: scare. What makes scare so powerful is that scaring happens automatically at the end of a turn. This means that every scaring unit freezes all adjacent opponent units every turn, even if you didn’t activate it. As a result, scaring units are terrific to leave near important intersections on the board to stop enemy movement. On the other hand, combining a scare unit with a carrying unit will give you an engine you can march across the board, and deconstructing frozen units is an easy way to clear the board.

Robo Pod units have the most deconstructing units of any Pod so a lot of Robo Pod strategies are about taking apart your opponent's pieces. Use this advantage to guard your home row and hunt down enemy units to keep them from scoring. Robo Pod units also have an additional advantage that aids them in deconstruction - almost every Robo Pod unit continues to function at its lowest level. This means that your units have to be removed from the board to stop them from moving. Robo Pod works best on boards where there are choke points that its units can guard, and from which it can slowly march its units to victory.

Eating and the Value of Food

The Wild Pod has the most diversity of all of the Pods, which means that you have a few strategies to choose from. You'll want to tailor your units carefully for the Pod you're facing. The advantage that you have is that your units can eat. This means that any Wild Pod unit on the board can potentially reconstruct itself and that you have a unique edge in deconstructing others. Be sure to make use of the level one "food" units that the Wild Pod has. More powerful units can be accompanied by a couple of level one units that can restore its levels and make it safe from deconstruction. Using eat well can decimate your opponent's units and allow you to keep your super units for the duration of the game.

The important thing is to know both your and your opponents strengths and weaknesses, but even the best strategy can be overcome by someone with no strategy. You must be prepared for anything and have a full knowledge of your own capabilities and how to use them.

Not the answer you're looking for? Browse other questions tagged x-pods play-off or ask your own question.

9
Where can I find LEGO X-Pod Playoff rules and printoffs?
16
Under what conditions are the LEGO boardgame dice unfair, and by how much?

3
Where can I find Lego x-pod playoff pods for the game?