Are there LDraw files for the standard Heroica components?

I'm using MLCAD to design and polish some Heroica maps. As I go I've made various LDraw files for the common map components (6x6 tiles with 4 spaces, 4x1 hallways, etc.) as well as some aliases for simple objects in particular colors (e.g. the gold pickups).

Am I duplicating work someone else has already done? If no one answers this in a few days I'll probably answer with my own archive.

Note that this is not a request for the Heroica sets in LDraw format - I've got manuals for that. I'm more interested in getting parts files that can be used to rapidly build my own levels.)

I've uploaded the Heroica LDraw parts I made to my website (and now there's even a site to go with it).

These parts are real Lego parts, but have not made it into the LDraw part library yet. I've put them on the same site for convenience.

Here are some parts that are invaluable, from the standard LDraw part library. If you're going to make Heroica levels, they belong in your MLCAD Favorites.

Here's a POV-Ray render of the map I'm working on now, sans greebling. Except for the 16x16 center the rooms and paths all use the premade parts, and it features the chest, gold, and potion parts also. 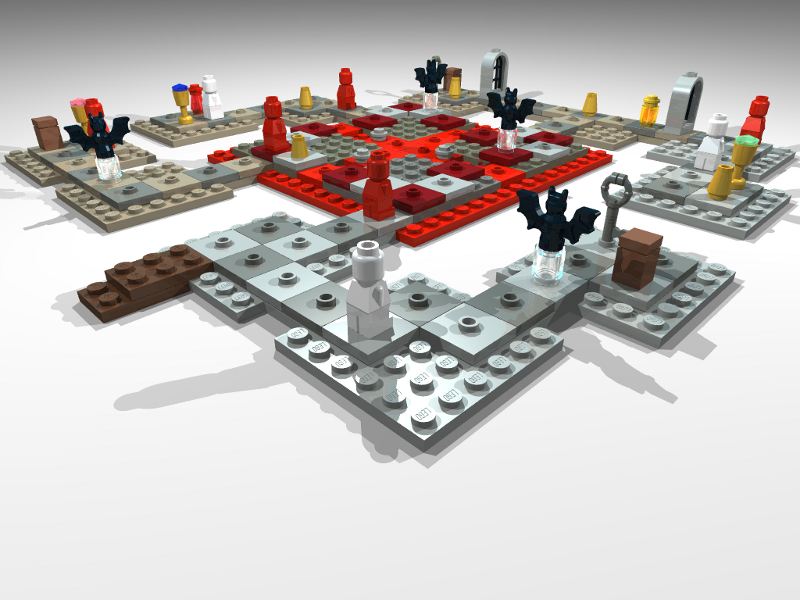 By the way, these are the first reusable LDraw parts I've ever made, so it's possible there's some really horrible failure in them.

16
Under what conditions are the LEGO boardgame dice unfair, and by how much?
5
Do LDraw files describe models, bricks, or both?
4
Where can I find LDraw files to download for basic figures?
3
How do I convert an .lxf file to an LDraw file for bricksmith on Mac?
3
Is there a current source for the LGEO parts library?
5
What are the differences between Studio 2 and LDcad when working with Technic and EV3?