I just bought a bulk lot of second-hand bricks and found this odd one inside. It has a black panel on one side and when pressed it plays a screeching sound. Through the transparent purple top I can see two LEDs and a circuit board.

I'm guessing the battery is so low it can't make them glow and the chop isn't getting enough power to play the real sound. It has the LEGO brand on the bottom so I'm pretty sure it is genuine, but I can't identify the piece or the set it could have come from.

Once I identify the brick I'll try to find out if it can be opened without breaking it, so I can replace the battery. 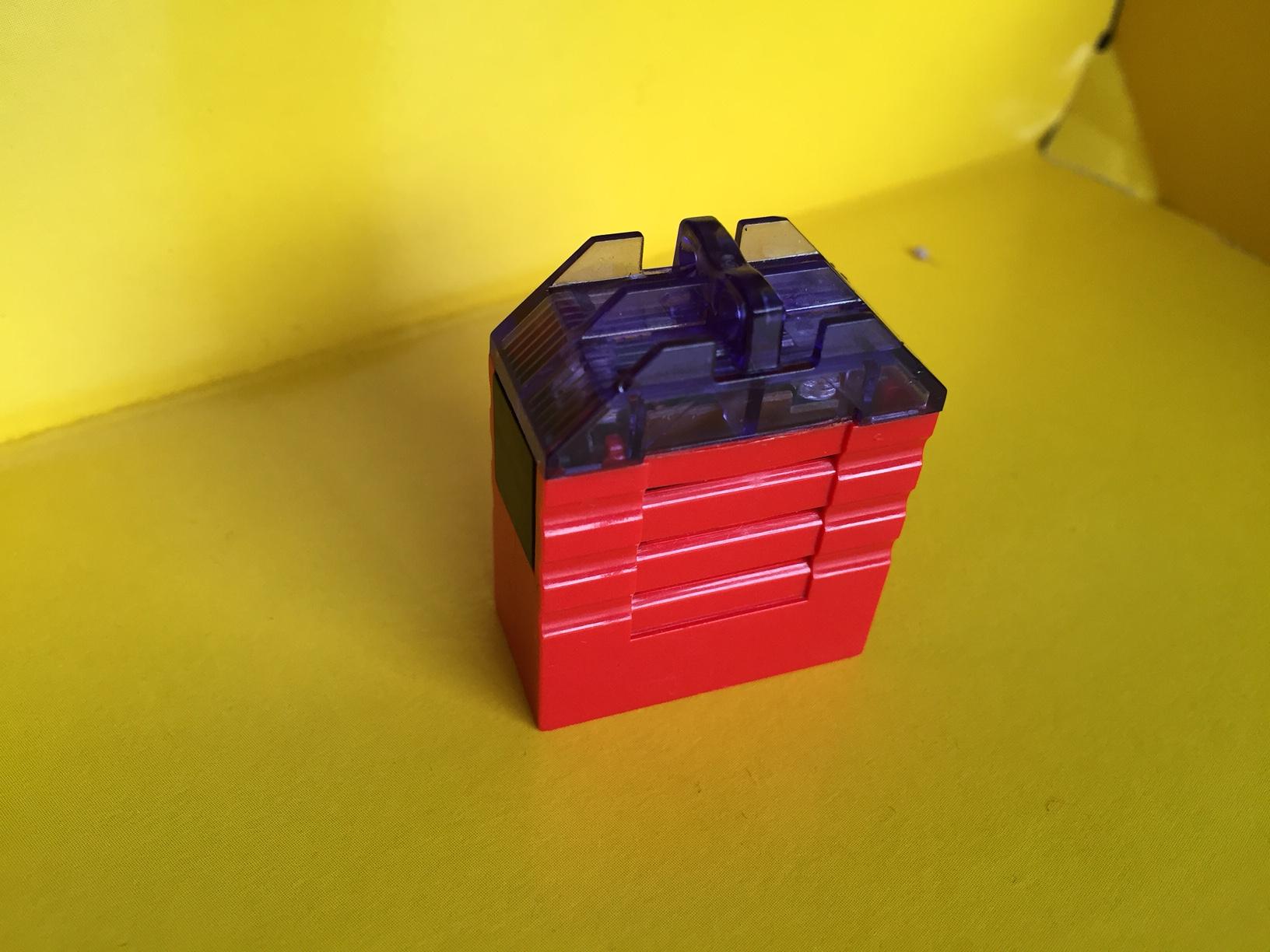 part-identification electronics
Share
Improve this question
edited May 3 '15 at 17:00

and here you can hear the sound

don't know if the battery is replaceable

If anyone is interesting in whether the battery can be replaced, the answer's yes-ish. 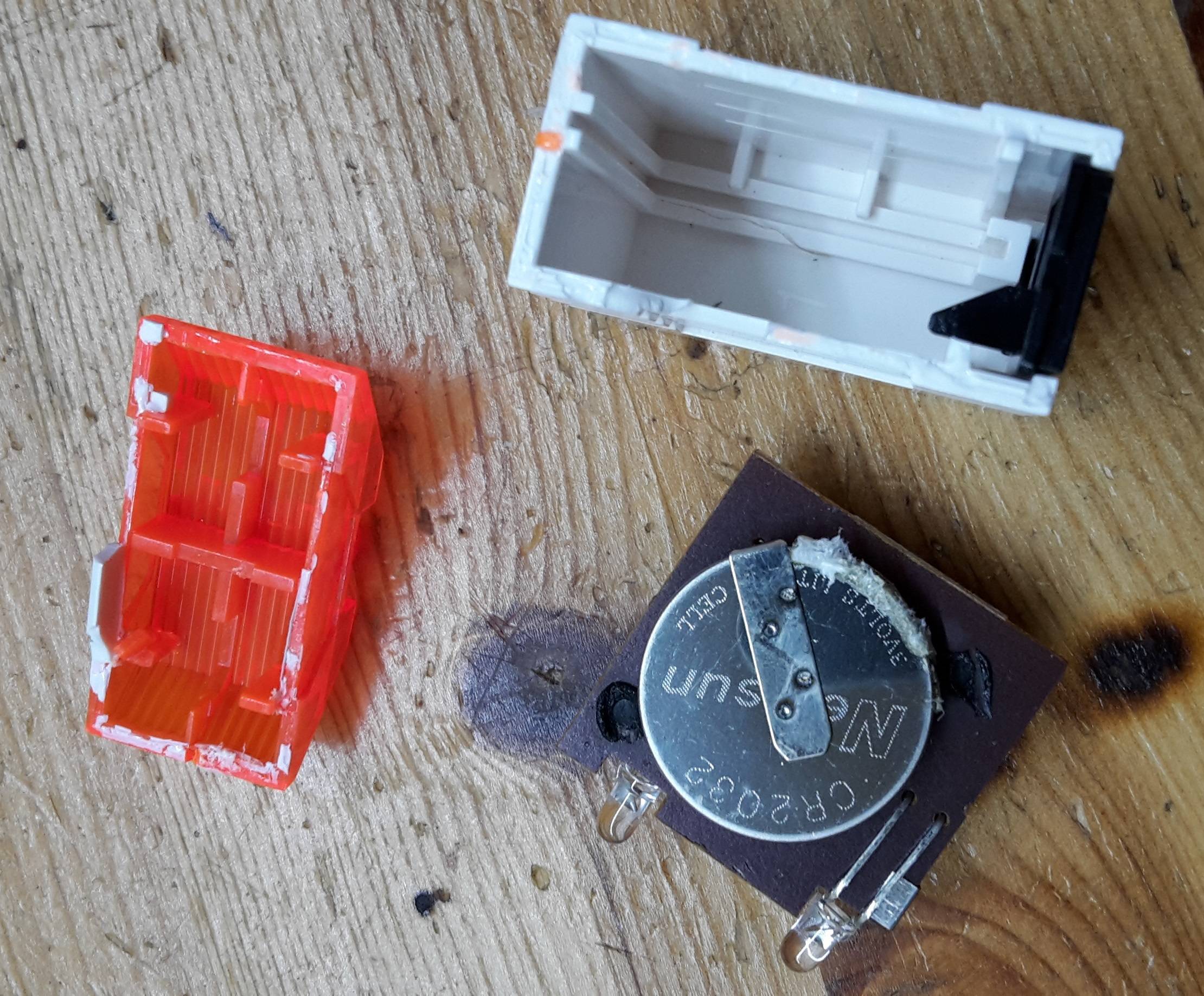 As you can see in the picture, it's powered by a CR2032. The only hurdle here is that it's welded to the contacts. Not insurmountable though. Also it was glued (or ultrasonically welded) shut, I had to put the orange part in a vise (with some cardboard to protect the plastic) and carefully yet forcefully pull it from side to side. I was surprised at how much force I had to use, so be warned.

EDIT: the fix and putting it back together

Because the top battery contact was spot-welded on, I had to pry the end a bit upward with a knife so I could grab it with pliers and sorta roll/pull the contact off, as you can see below. 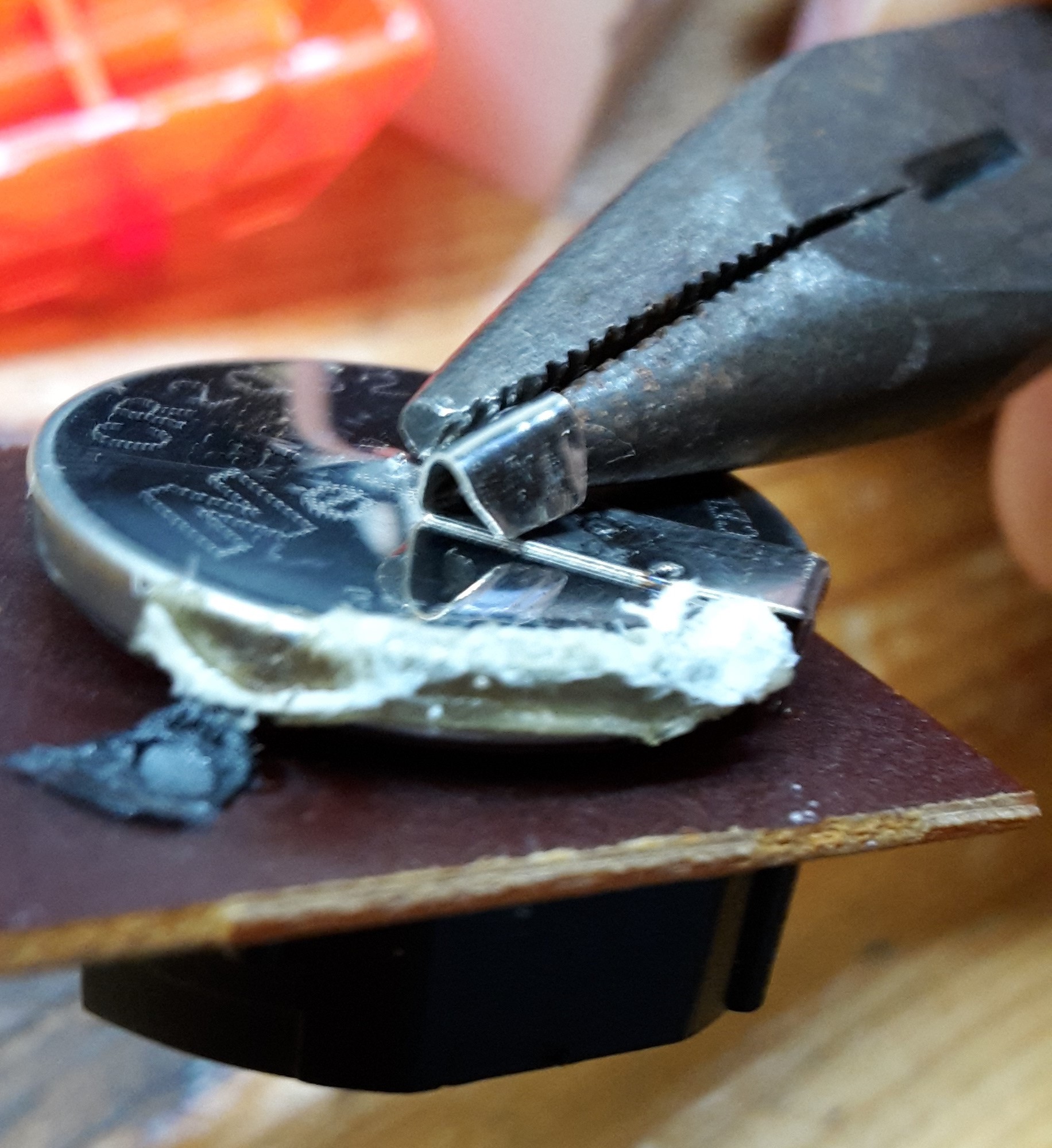 The battery's also glued to the circuit board, just gently pull it off making sure you don't pull the bottom contact off as well: 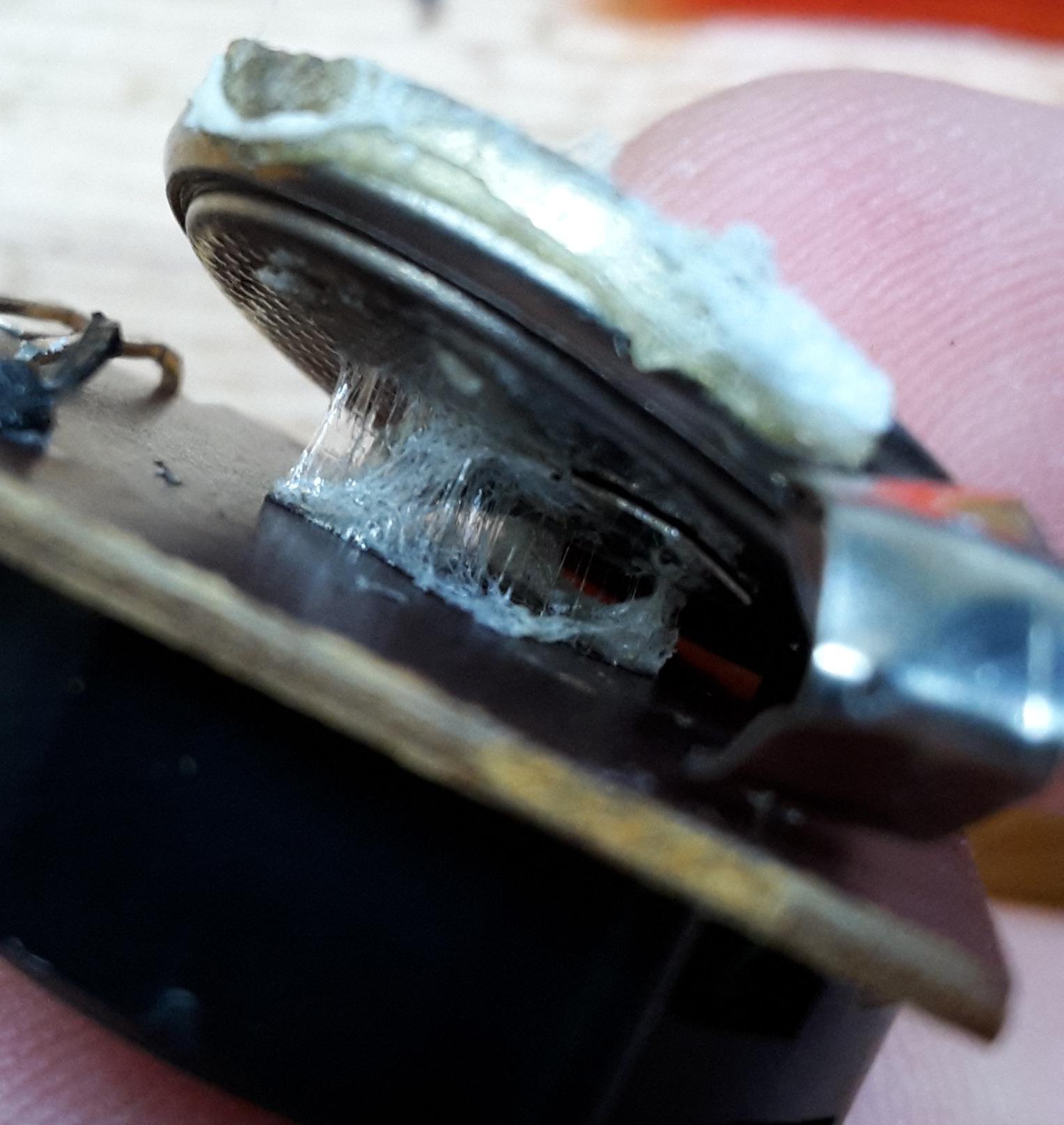 I don't have a picture of the next part, but it's pretty straightforward. I straightened the top battery contact so that the new battery would fit in between. Then I carefully put the circuit board back in the case, and pushed the new battery in between the two contacts (mind the polarity). It should be a very tight fit. At least in my case it was, and it was impossible for the battery to move. After that I put some really good glue (something like Pattex Extreme Repair, not a fan of superglue for this application) on the orange top of the case and closed the case.

I used a clamp to keep it that way for the next 24 hours: 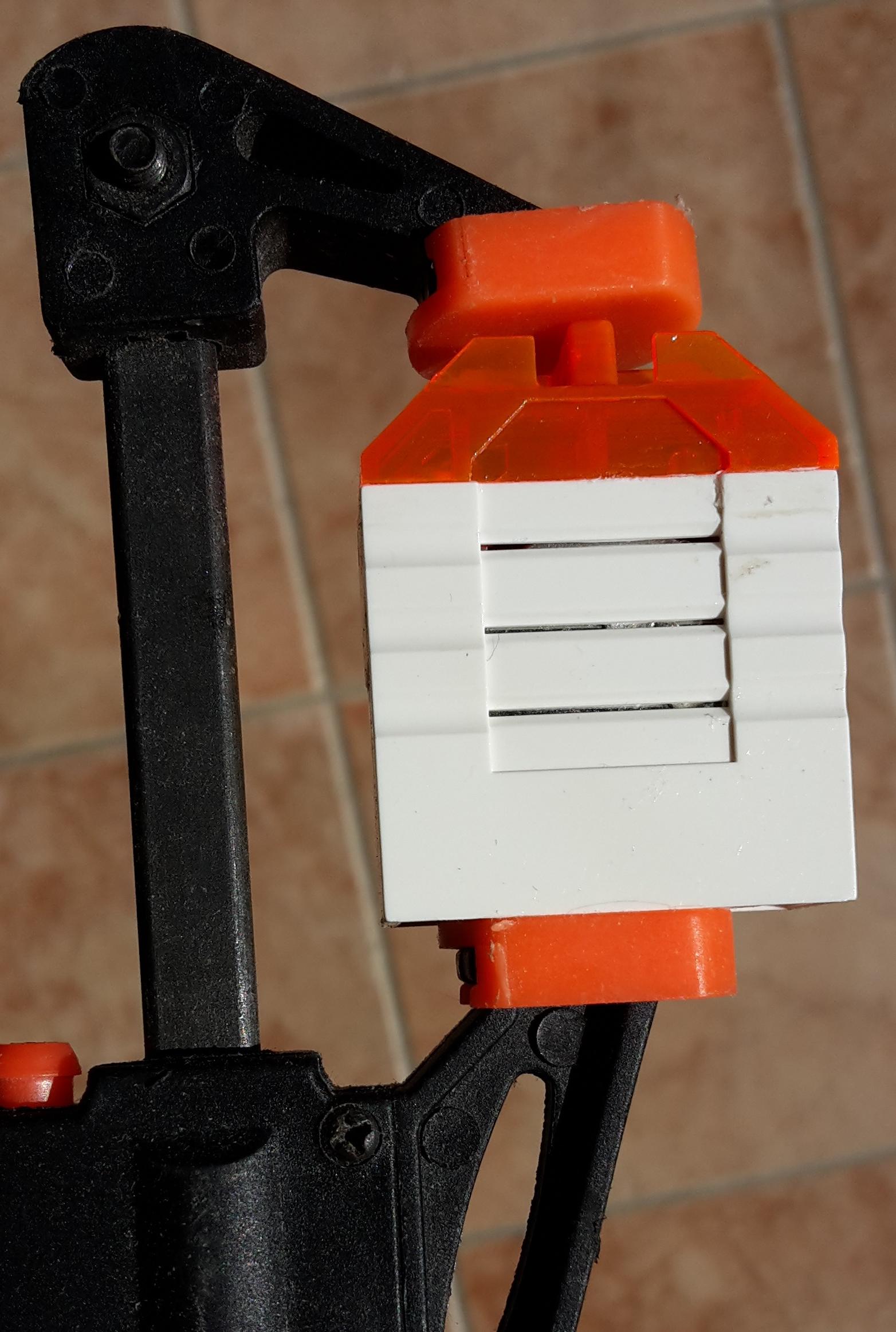 Not the answer you're looking for? Browse other questions tagged part-identification electronics or ask your own question.

19
Is it possible to change the battery in a 54604 light brick?
2
Can you identify these parts? Sliding brick and plate with a groove
0
Identification of light and sound part
12
Replace Battery in LEGO Dino Attack Light-Up T-Rex Head?
5
What is a good third party battery box and receiver?
8
What is this grey LEGO light and sound element with neon green attachments?
2
Are there LEGO plates without the word “LEGO” on the studs?
11
What is this light and sound LEGO brick?
9
What internal electronics do Spike Prime and Mindstorms Robot Inventor use?
7
Identify part with handle, rod and loop