What is the strongest LEGO structure?

I am going to build a LEGO computer case. Different from Mike Schropp and greenyouse, I am planing to build an upright case.

(This is a general "strongest LEGO structure" question. Using the structures in building the computer case is just an example of applications.)

To make it more challenging (and more perfect), the case will have handles (like this type) for carrying the whole thing around, and it will have "legs" (like this bar type) to lift the whole case up for ventilation.

For better reference, here is the coordinate notation:

There are 4 parts (for now I can think of) in the case which has to encounter different types of strength challenges: 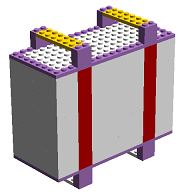 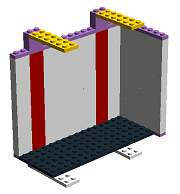 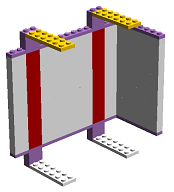 For the white bricks, they do not require special strengths, do they?

FYI, here are the LEGO dimensions:

Above is the common information across the 4 questions.

Below is the question for this specific part.

The pillars do not have many requirements while the PC case is sitting still on the table. But when the PC case is lifted up by holding the handles, the pillars become critical to support the weight of the entire PC.

Normal stacking up the LEGO bricks or plates must not work. The bricks/parts will be separated very easily.

What is the strongest LEGO structure when using as Pillars?

I have come up with a structure (below left). I pile up the plates along the Y axis. So when tension is applied to the pillar, the knobs (many knobs) will lock each others, such that (as long as the LEGO plates themselves do not break) the pillar will not break into two parts.

Such that, the pillars have to be 6 pitches thick, which is 4.8cm. If this structure is possible, can we make the "doughnut" 1 pitch thick, and the pillar 4 pitches thick?

I assume using longer plates will be better than short plates, because fewer gaps along the Z axis, lower risk to separate, isn't it? However, I believe more plates stacking up along the Y axis, which will have more knobs, will make the pillar stronger. Which means using plates here is better than using bricks, isn't it?

In this PDF page 4, that research suggests using pegs. Obviously, the number of pegs can be used in the pillar will be less than the number of knobs in my suggested structure. And I afraid the peg itself will break, as pegs are hollow plastic, while knobs are more "solid".

Which structure (the above one, the research paper one, or your suggestion) is the strongest?

Generally LEGO Technic structures (pins and beams with holes) tend to be lighter and stronger as System structures (classic bricks). The generally accepted best practice among amateur and professional LEGO builders is to have a light and strong internal structure (either Technic or other materials, like wood or steel) that can then be decorated on the outside.

In your case the computer case should have solid walls that provide adequate dust protection and is capable of directing airflow, but Technic is quite difficult to get reasonably airtight. Aesthetics can also play a large role, therefore it is understandable if you wish to have a brick-built outer layer.

What I'd recommend is building a Technic frame, using multiple beams grouped together with various overlays and reinforcing them with other beams in triangle configurations (look at bridges, both real life and LEGO for inspiration). Then you can apply an outer shell to this frame, built by whatever means you'd like, since the Technic beams will hold the structure together and give the wall panels stability.

Especially if you wish to lift the case, it will need to be able to hold its weight by the handles. Regular System bricks are typically too heavy for this kind of build, and while it can be mitigated somewhat using tricks like your doughnut (which I personally find quite genial), they increase the mass and structural volume significantly, and soon you will arrive at huge values regarding cost, weight and volume. Regular bricks also have only one direction of assembly, providing little to no extension and joining points, but a trivial direction where force can pull them apart. Technic beams are, on the other hand, capable of supporting multiples of their own weight in any direction, so they will not be pulled apart easily, especially when used with pins that are locked in place with bars.

I am also going to recommend Technic as the stronger support option, but I would make the case out of "normal" Lego, and then implement 2 Technic rectangular "rings" around the case at the place of your pillars, joined at the top and bottom (on the top the joint could form the handle). Make these rings or braces by overlapping Technic pieces and joining them with Technic pins. Then, in your case, insert a few pieces that can also accommodate a Technic pin (1x2 brick with center hole) and secure the brick-built case to the Technic rings that way. If you think this through, you could make that connection easily removable, so that you can slide the brick-built case out of the 2 rings and have an opening side panel allowing access to the internals - a very flexible but still very strong design.

I have mocked up this case, see the below pictures. No comments on the sloppy building style - I had to work with whatever my son did not have incorporated into one of his builds :). The Technic rings obviously need some more bracing in your final design, but I think this shows the concept of using 2 rings, a handle, and pins to secure and remove the central case pretty well: 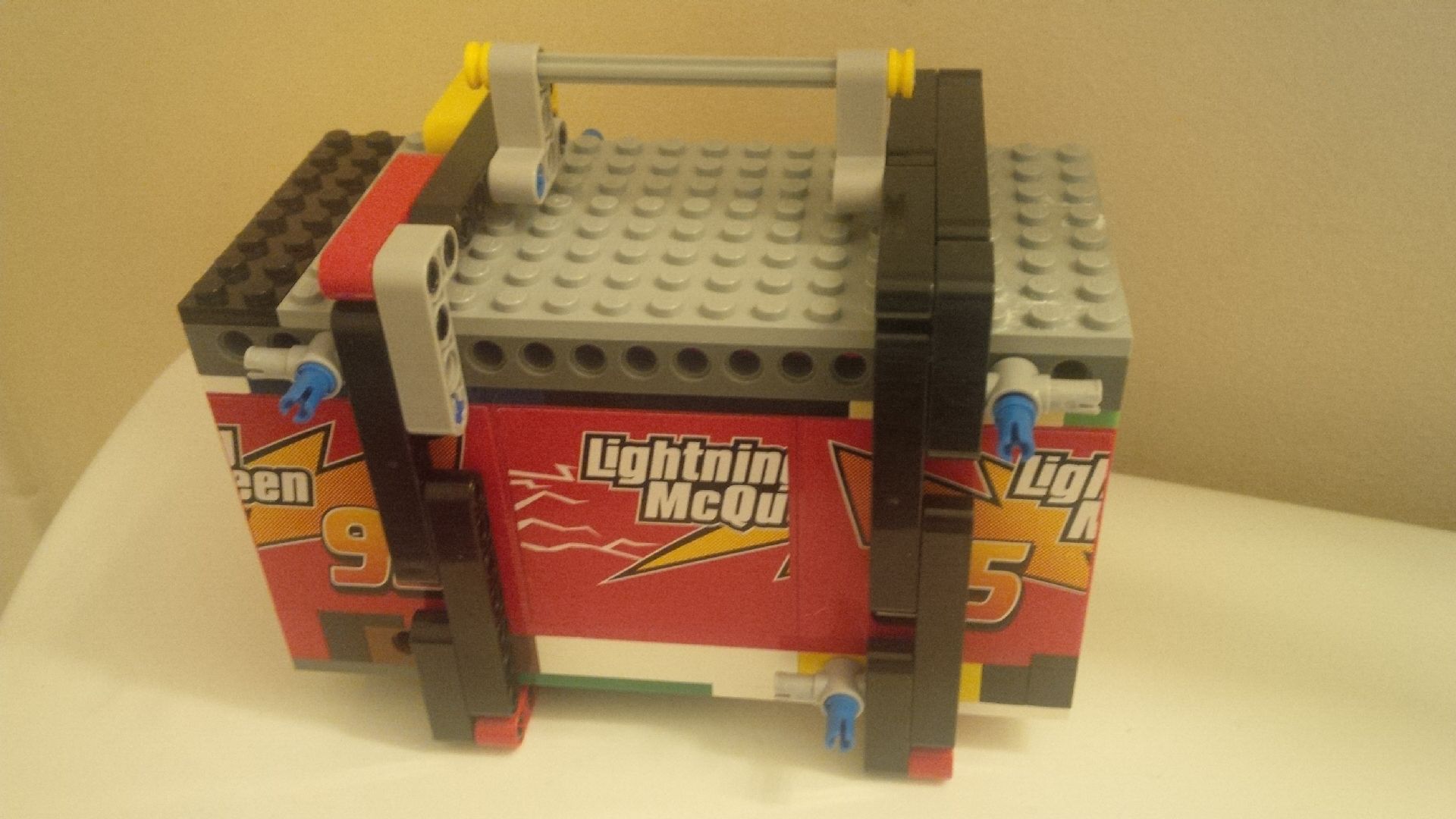 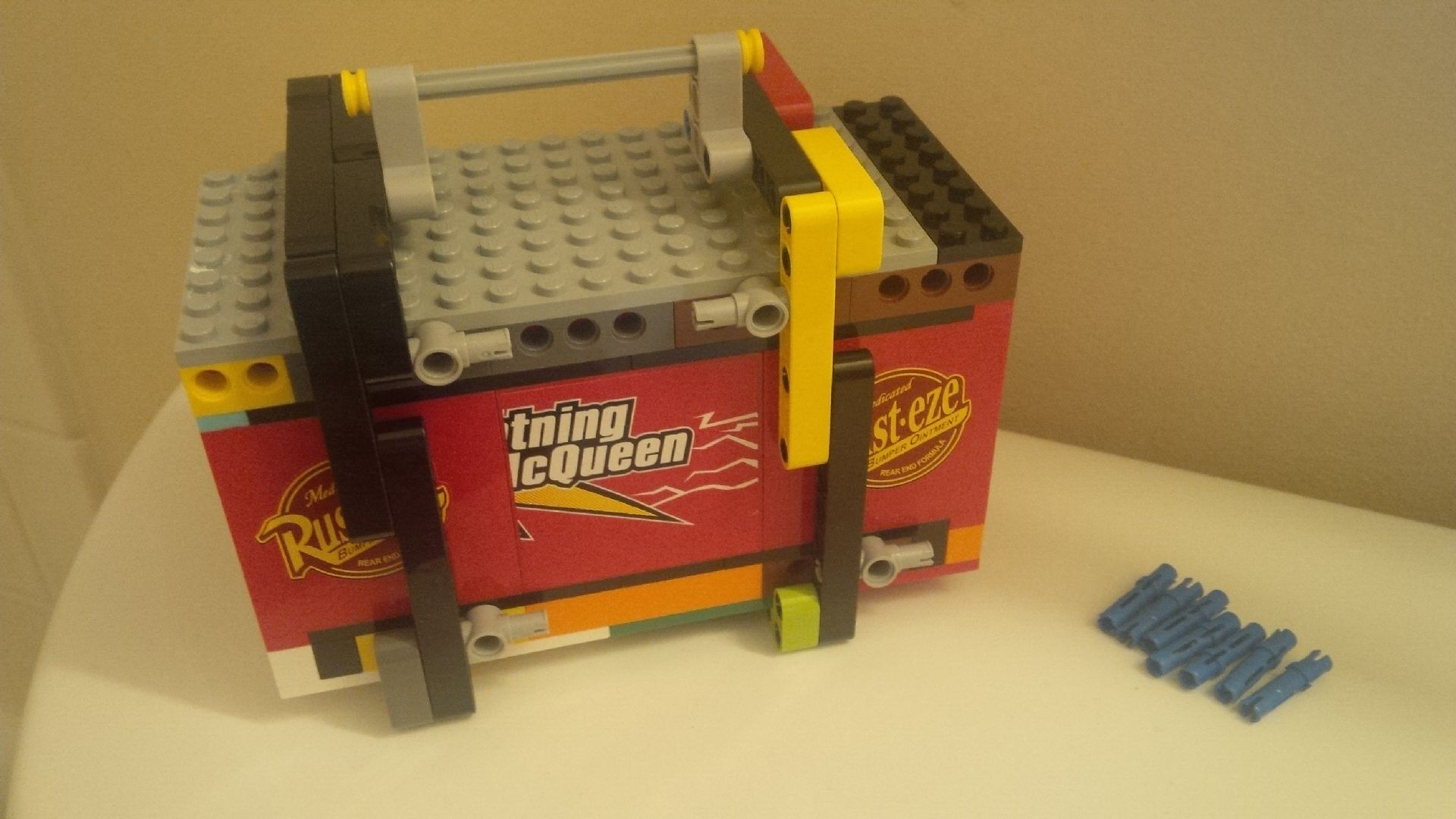 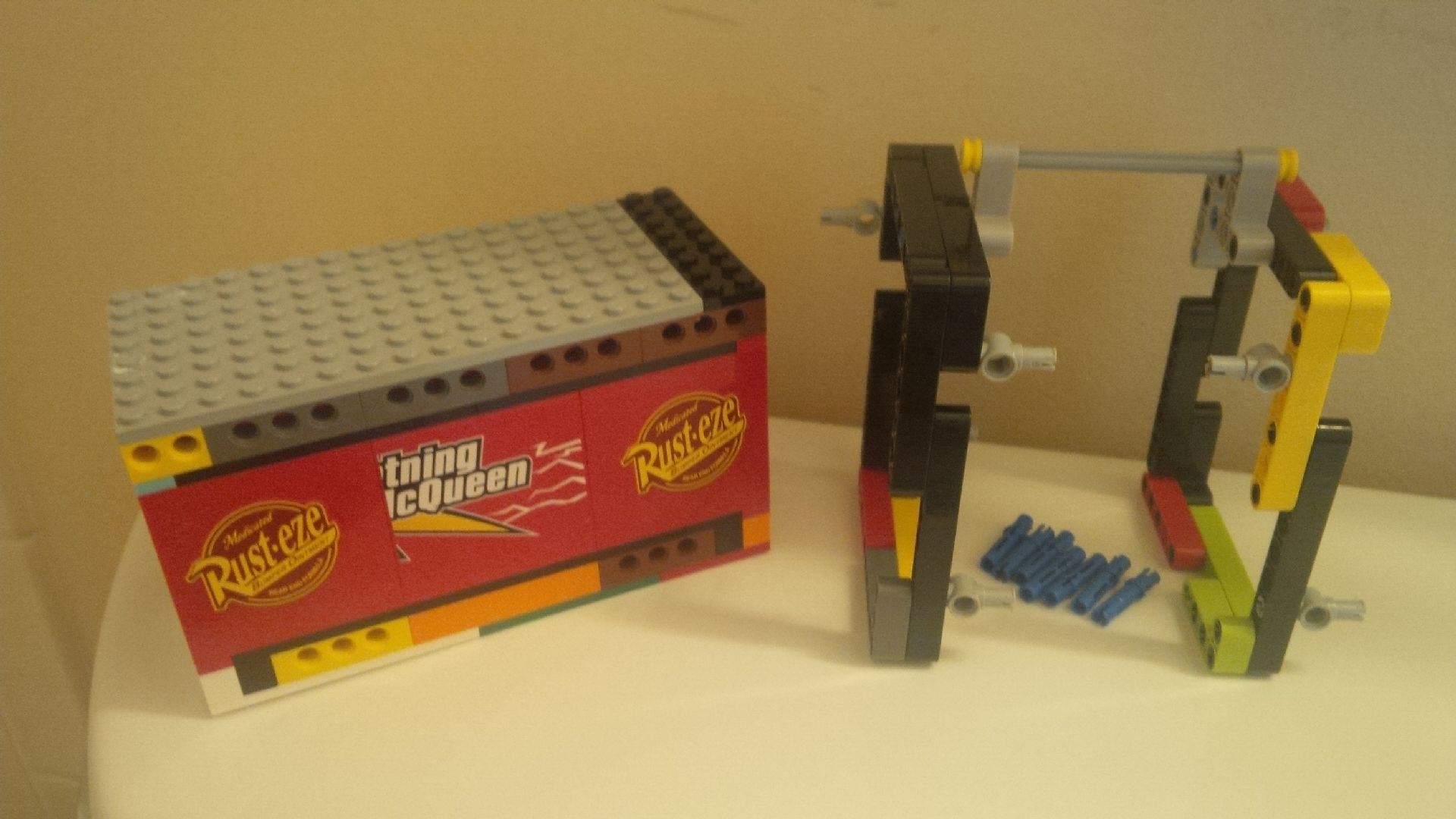 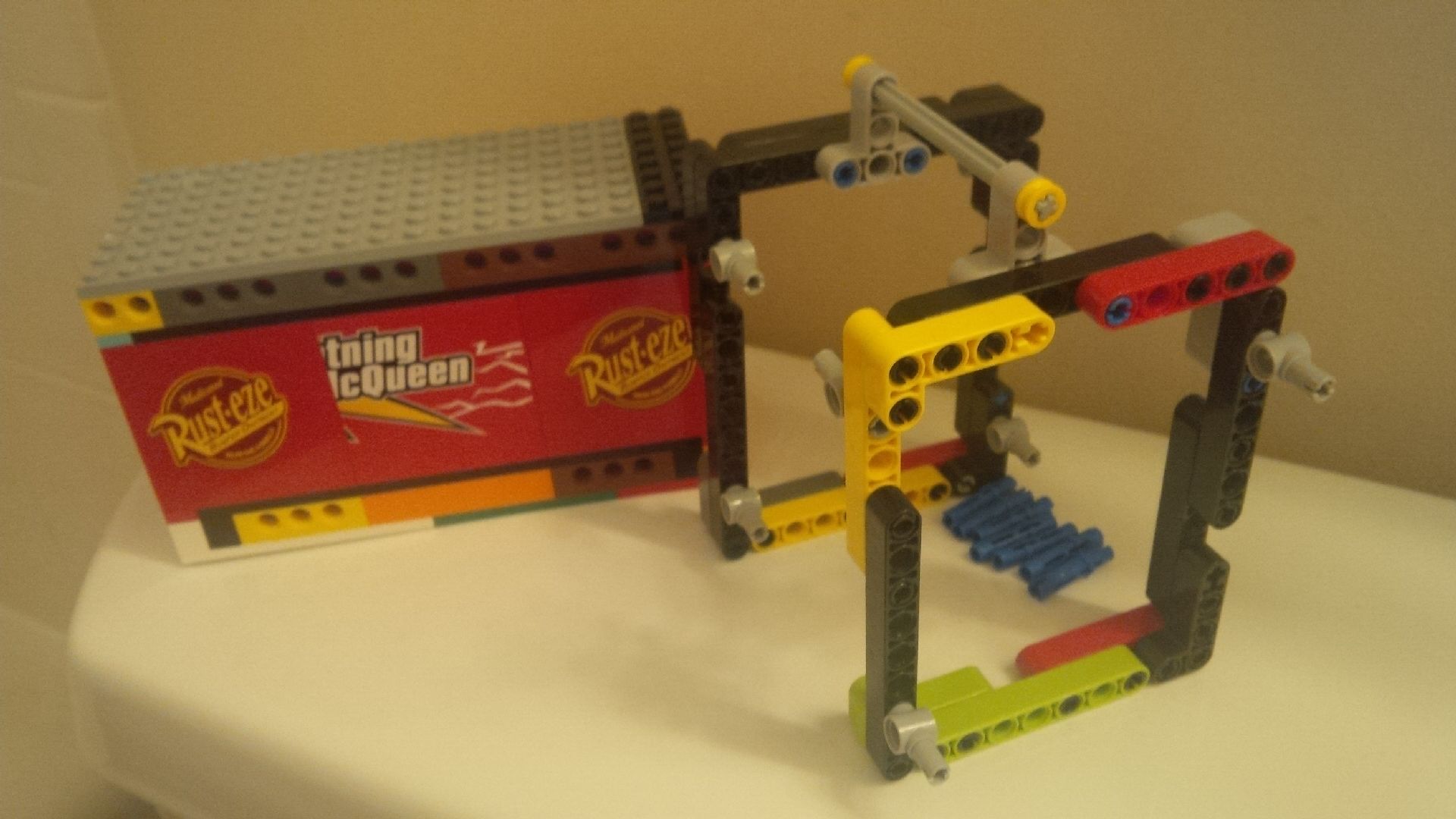 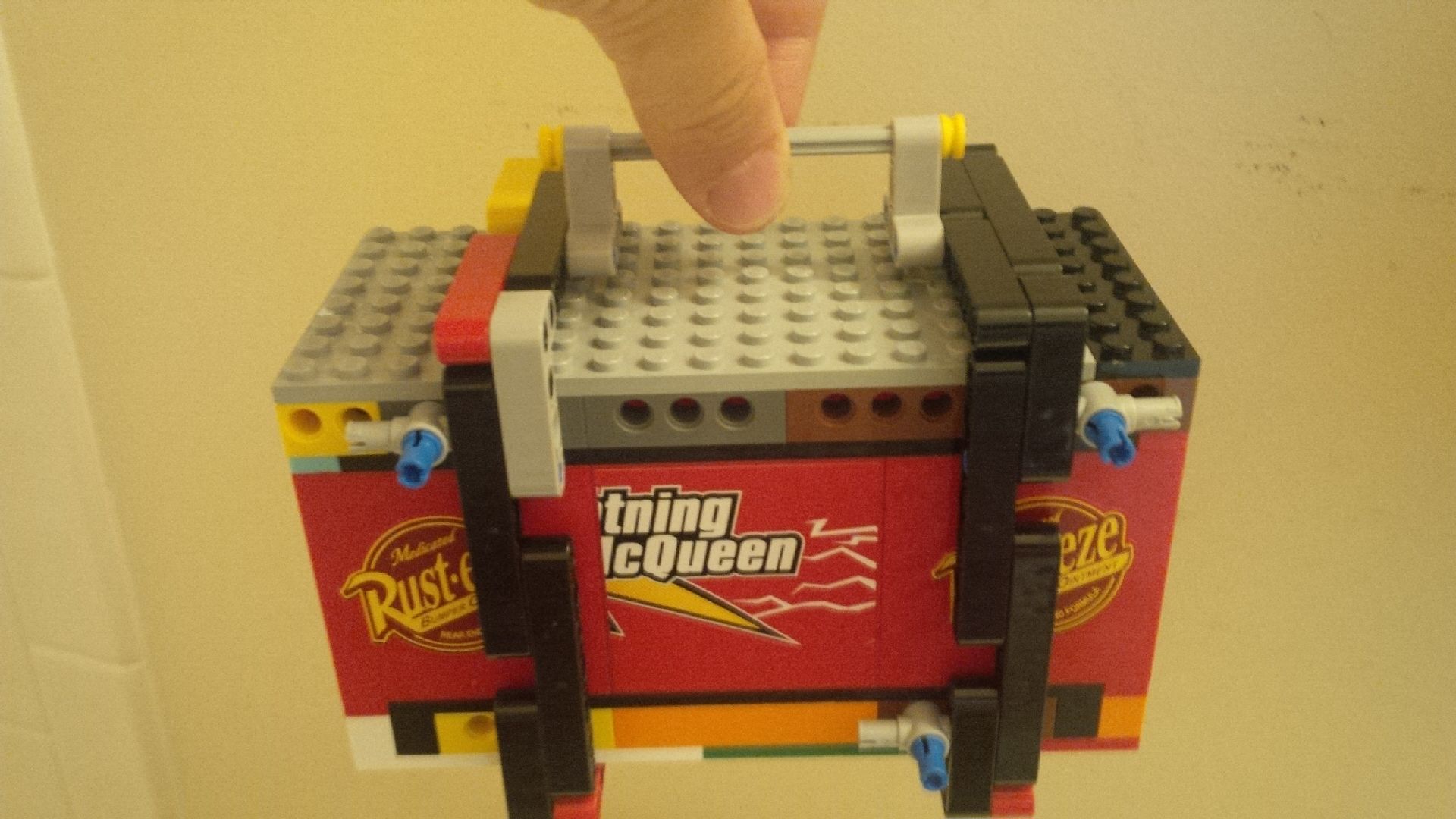 A 3-D Box frame using Technic bricks or beams has the highest potential for rigidity and strength. The 3-D box frame strength comes from its use of distributing any external force across multiple joints. Classic bricks works better than Technics at creating a desired form - like a wall- but classic brick clutch power is too weak. However a classic brick wall can be strengthen by using Technic bricks and beams to brace(bind) the walls along Z axis (the axis parallel to the studs and cylinders). For example, a wall composed of 4x1 technic brick, 4x1 plate, 4x1 plate, and 4x1 technic brick can be braced by a 3 hole technic beam on both sides of the brick wall that would very resistant to external impact.

Not the answer you're looking for? Browse other questions tagged building design plastics or ask your own question.

19
How much weight can a handle of Technic pegs and beams support?
5
Strongest Vertical LEGO beam
11
City scale connection for five-bladed helicopter rotors
6
Strongest LEGO structure - (2) Floor
6
Challenge: Specialized Palm Build
9
What are LEGO rubber bands made of?
5
What's the fastest way to rebuild different sets that have been brought together
11
Problem with “warping” of LEGO water
5
How create a custom Roller Coaster? Where I can get the track pieces?
5
Putting flipped plates together as close as possible