What is the difference between these two Technic half bushings?

While randomly browsing some LEGO sites, I came across a weird (to me anyway) looking bushing. Its part 4265c. Below is one of the images describing it and the left one I recognize, but the right one I have never seen. It looks like there is some built-in play to the axis. 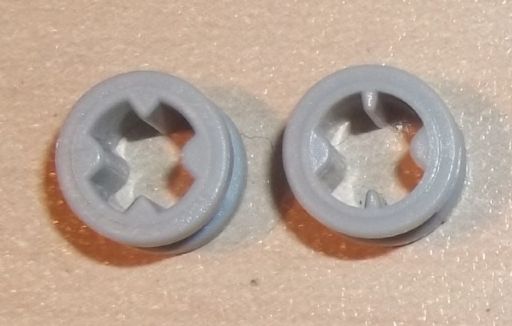 They both appear to have the same part ID despite being quite different.

Sariel answers most of your questions in The Unofficial LEGO Technic Builder's Guide.

toothed half bush with a cutout

The second variant, the toothed half bush with a cutout, is exactly what its name implies: a copy of the previous version with part of the axle hole cut out, which makes the axle hole large (see Figure 4-13).

This modification was introduced to make it easier for children to take half bushes on and off the axles, and that's exactly what makes it much less popular with builders: These bushes are more likely to shift when stressed than the first variant.

Other than that, it has every quality of the original toothed half bush except that, having been introduced a few years later, it's newer and thus made of strong material.

This leads me to think that both are interchangeable and that the one in the right picture is a more cost-efficient version of 4265c (using slightly less ABS). Lego Pick-a-Brick also shows the version in the picture on the right.

14
What is the difference between these hole shapes?