My building is developing gaps and spaces

I am building a large project, and there are spaces developing between bricks and plates. I've been working on it for almost a year, and some places are 20+ bricks high. What can cause this over time? Can plates get soft and warp? If the weather is warm, can this affect it? Has anyone else had this problem? Also... As many times as I've undone and re-done sections, some places won't level out and can be less than one plate off in height.I would love some advice. Thanks!

Without more information, it's hard to know what can be causing the gaps. My theory is that the structure has gotten large enough that the spacing in the bricks is adding up such that your structure is no longer "square".

According to this page, there is a 0.1mm gap between two bricks attached to a common base. This gap makes it possible to remove the bricks once they've been placed. Also, Lego claims their manufacturing process has a tolerance of 0.01mm (10 microns). With a long enough structure, those mm add up.

Here is an example of the gap in play 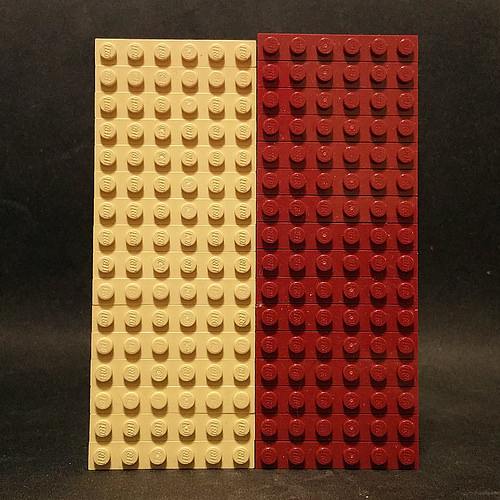 There are the same number of plates on the left and on the right. The left ones are all pushed together, the right ones are attached to a baseplate (or some other 16-stud plate or brick). Because each plate has a 0.1mm gap, multiplied by 16 plates gives 1.6mm difference. Even if the 0.1mm isn't the right value, you can see that there IS a gap and it is large enough to be significant over a small distance.

When you are building a very large creation, inevitably some things won't want to fit properly. I am building a multi-story building using 1xN bricks for the walls (mostly 1x2 and 1x4 bricks). Each story is the same size as the previous one, and each one is re-inforced by the flooring and internal walls, but it's painfully obvious that the different stories don't fit well together. When I take one story off another, it doesn't want to snap back into position later.

It's even possible to take advantage of the gaps to make curves. If you make a long enough wall out of 2x1 bricks, you can physically bend it into a circle.

As far as advice on how to avoid this problem, I don't really have anything concrete. One thing you could try to do is to space things uniformly, using the same kinds of pieces all the time. If you build a long strip using 2x4 bricks on one side, and 2x2 bricks on the other, you may find that they are not the same length even though they have the same number of studs. Or, design your creation in modular sections, counting on the fact that it will not quite meet at section boundaries. This is how people build bridges: they are frequently designed to allow for expansion and contraction of the bridge sections by placing seams that allow for the change in size as the bridge temperature changes.