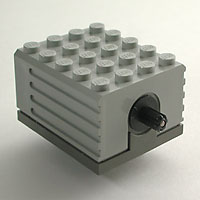 Unfortunately, it's broken: The shaft spins freely by hand, but when I connect power to it, it doesn't spin at all.

I would like to see if I can just open it and place a new DC motor inside, but without breaking it if possible – has anyone opened one of these before or posted instructions as to how? 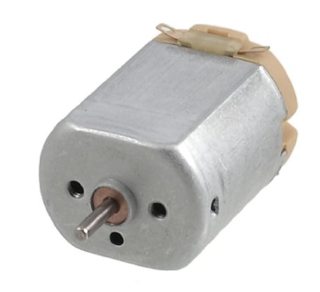 would fit inside it, but of course I would check the dimensions first and make sure it's not a bad solder joint or something else.

I see Philo has disassembled its replacement here, but I don't see anything similar for the 74569.

Well, I opened it up without much success, and took some pictures of the process:

At first I tried pushing/prying the light grey tabs away from the dark gray "bottom", but those weren't budging 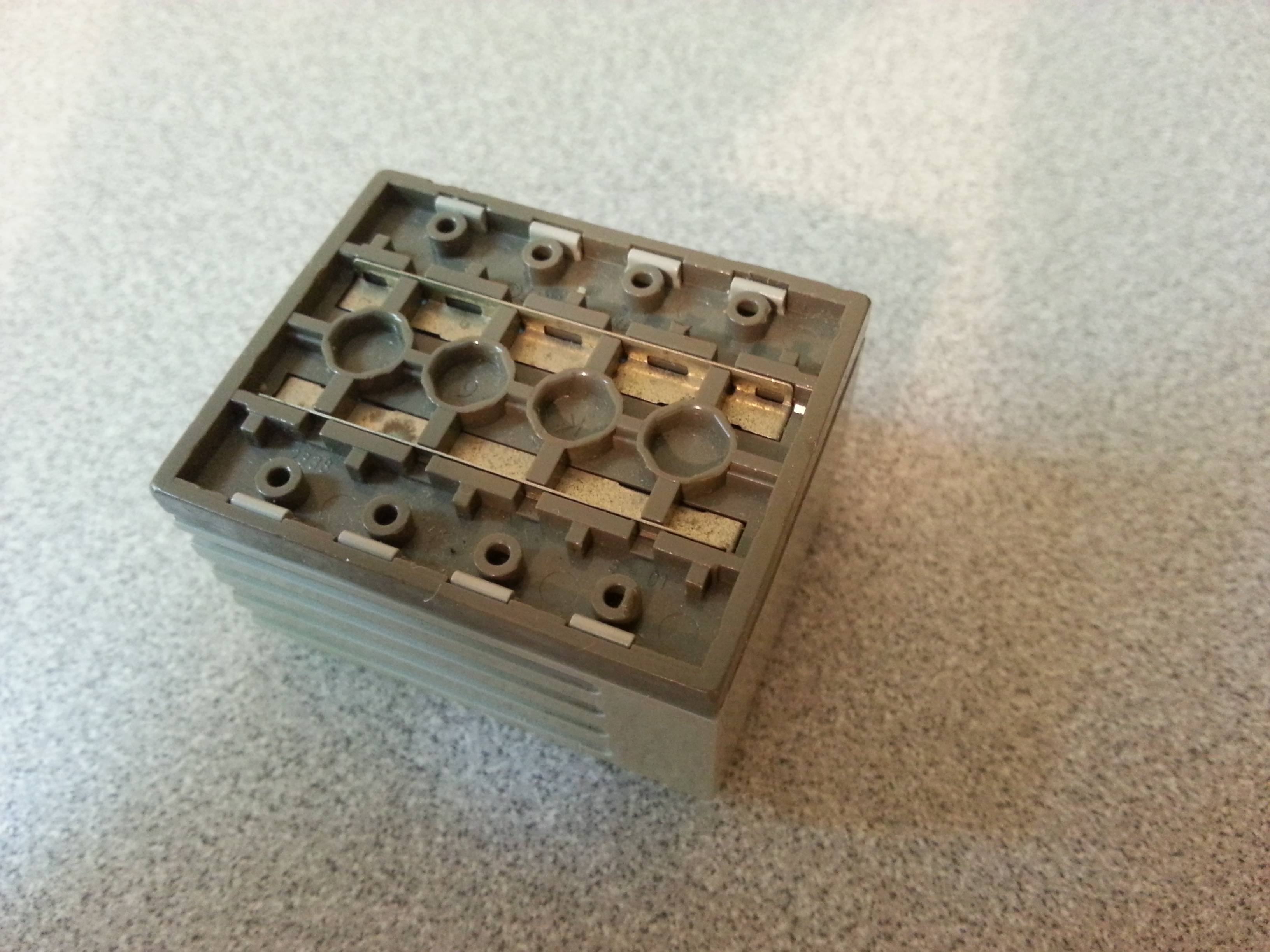 So plan B: wedge it apart: 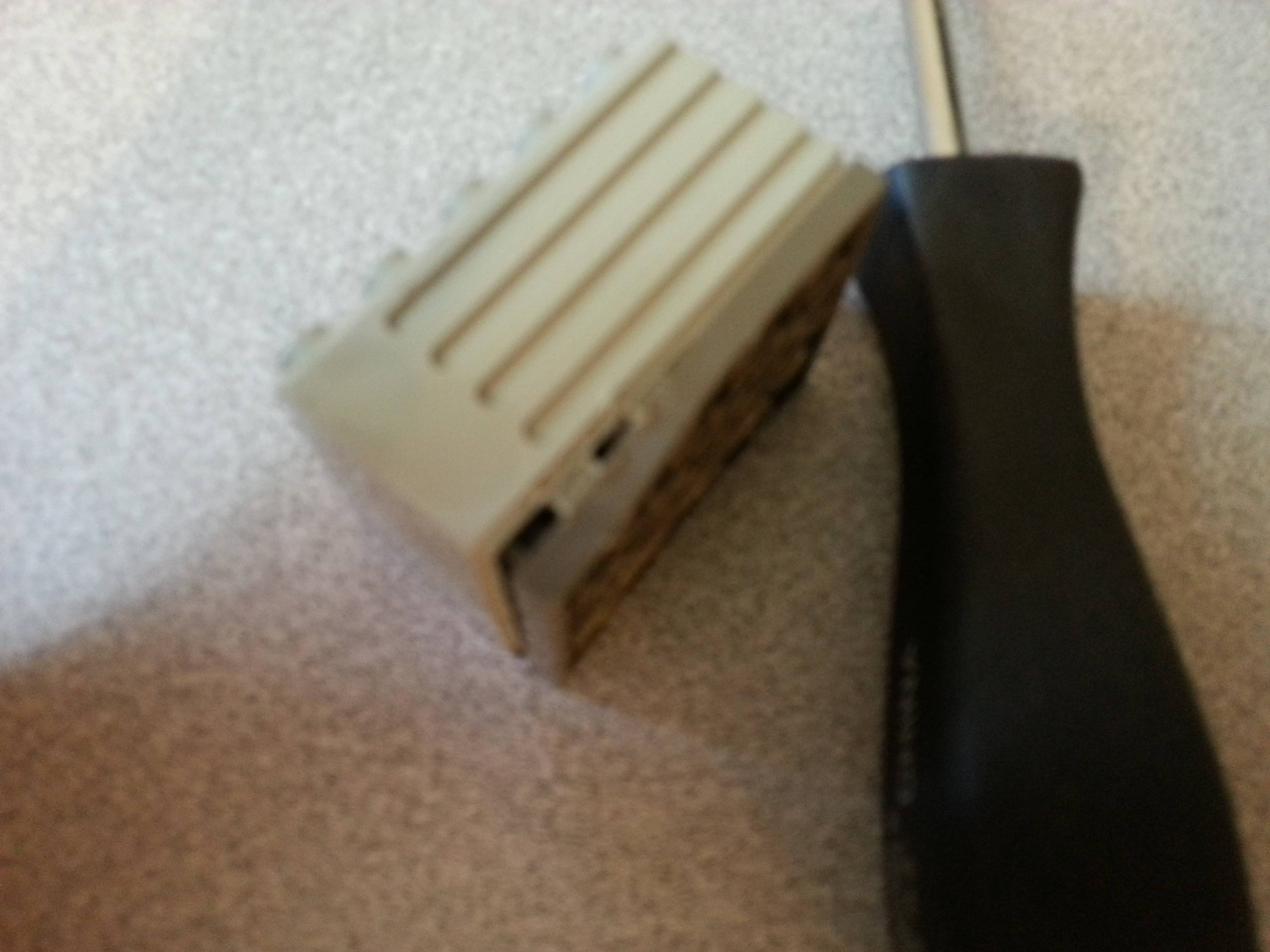 It was opening, but I was also distorting the plastic in the process - perhaps if I had a hot air station or something, I could have of softened it, but eventually it gave way: 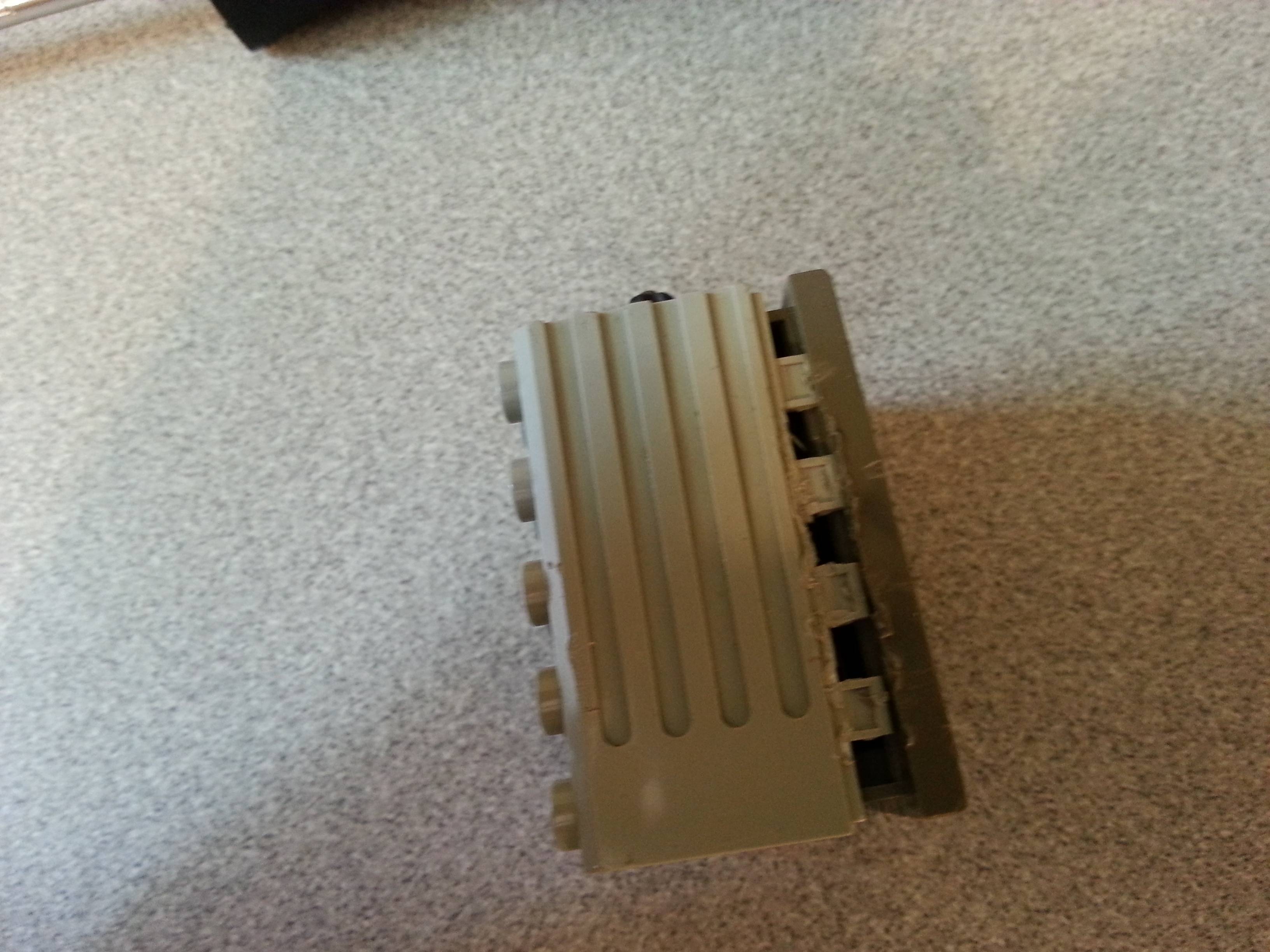 I didn't open it just yet, but rather went to work on the other side - I made my way around from the front/back, as it seemed easier than going at it directly from the side. Anyways, it was much easier than the first side, and I got it open: 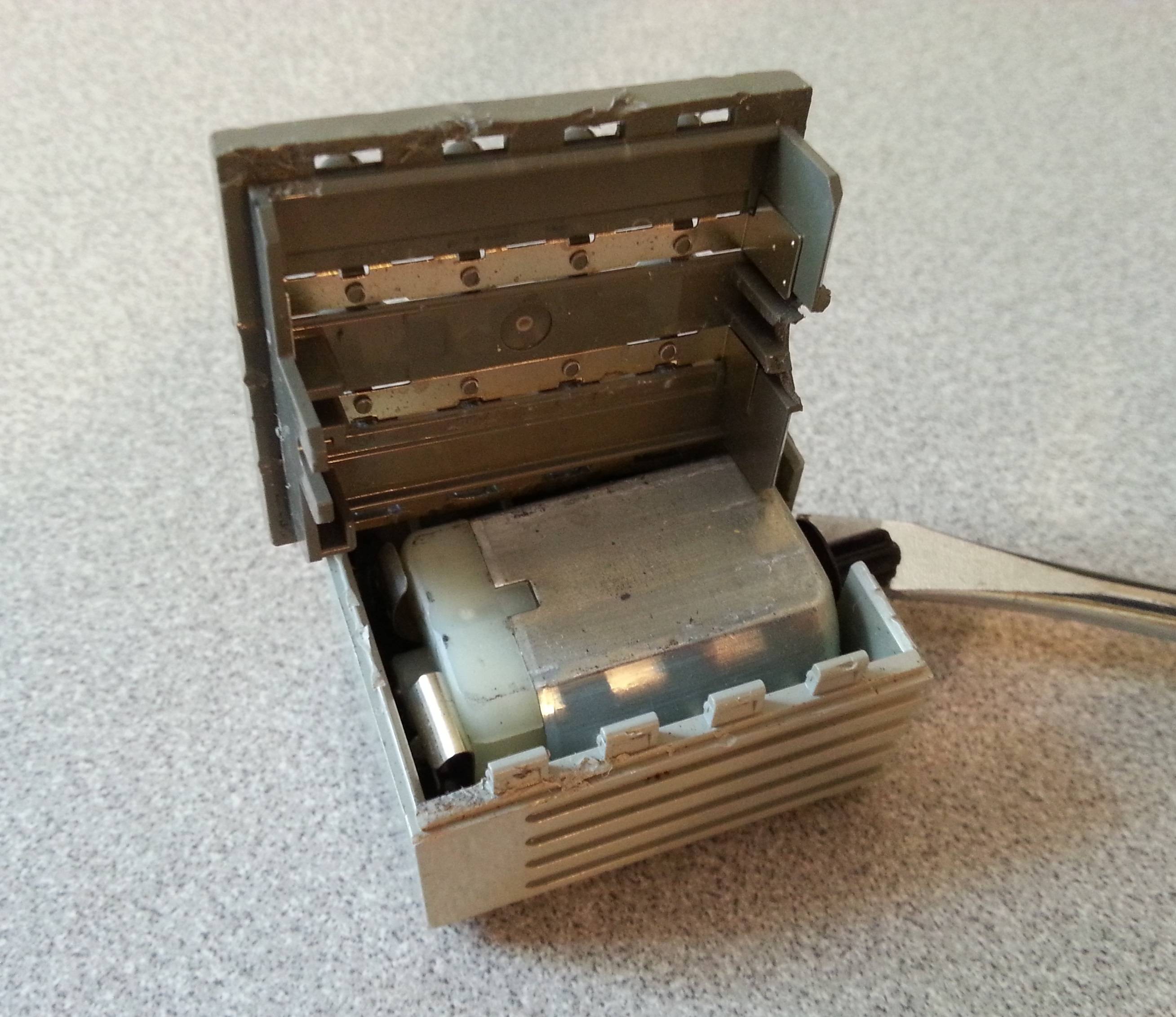 Nothing fell out, and I didn't rip any wires out by opening it, so I proceeded to take out the motor: 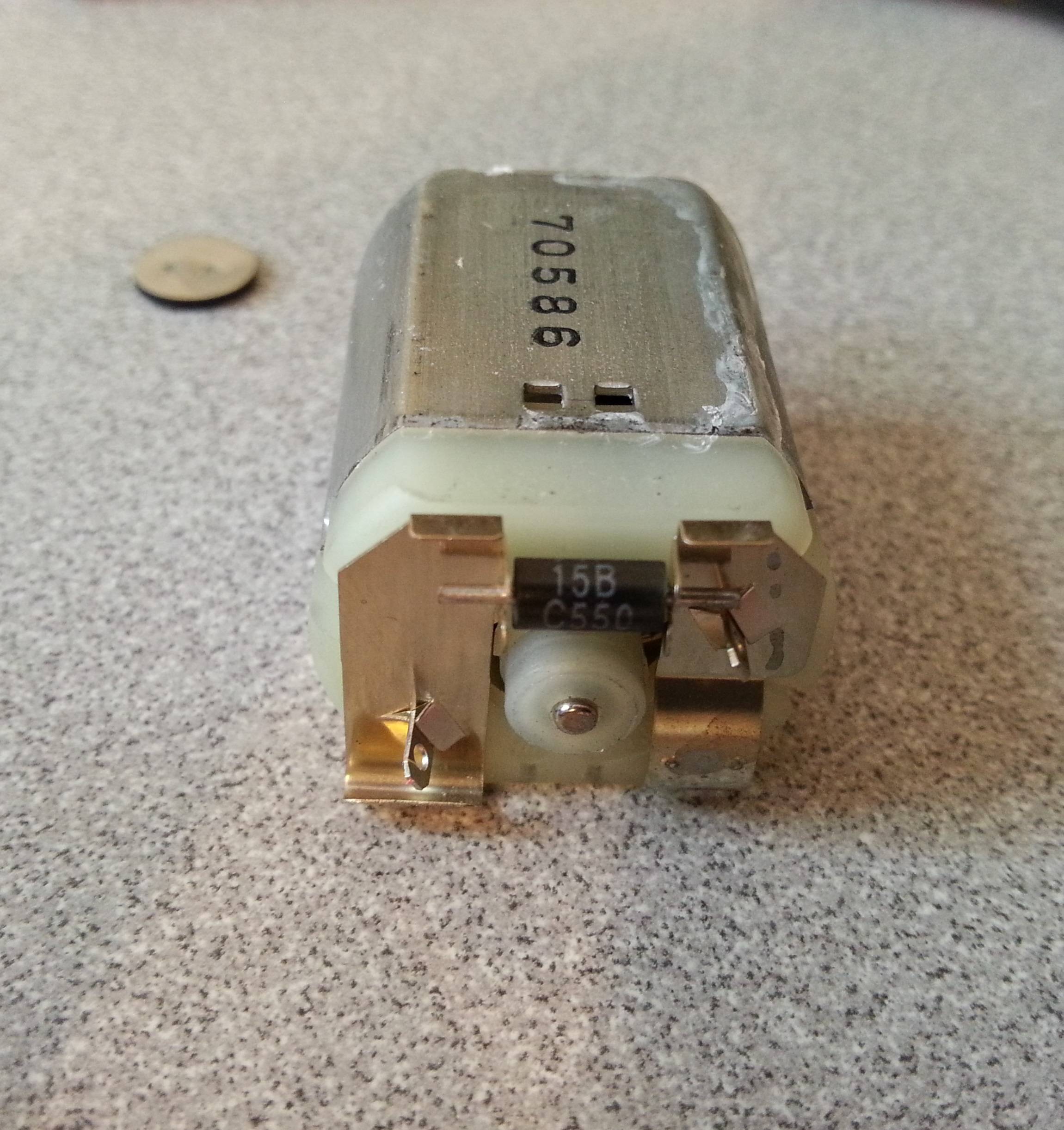 This is where something finally fell out - there was a little "spacer" disk (visible in the top-left) that was between the end of the axle and the back side of the plastic housing.

After that, the electrical connection assembly slid off easily - not sure what the component is or how to test if it's good, but it seems like it was made such that it's replaceable - no solder was used, just metal "crimps" 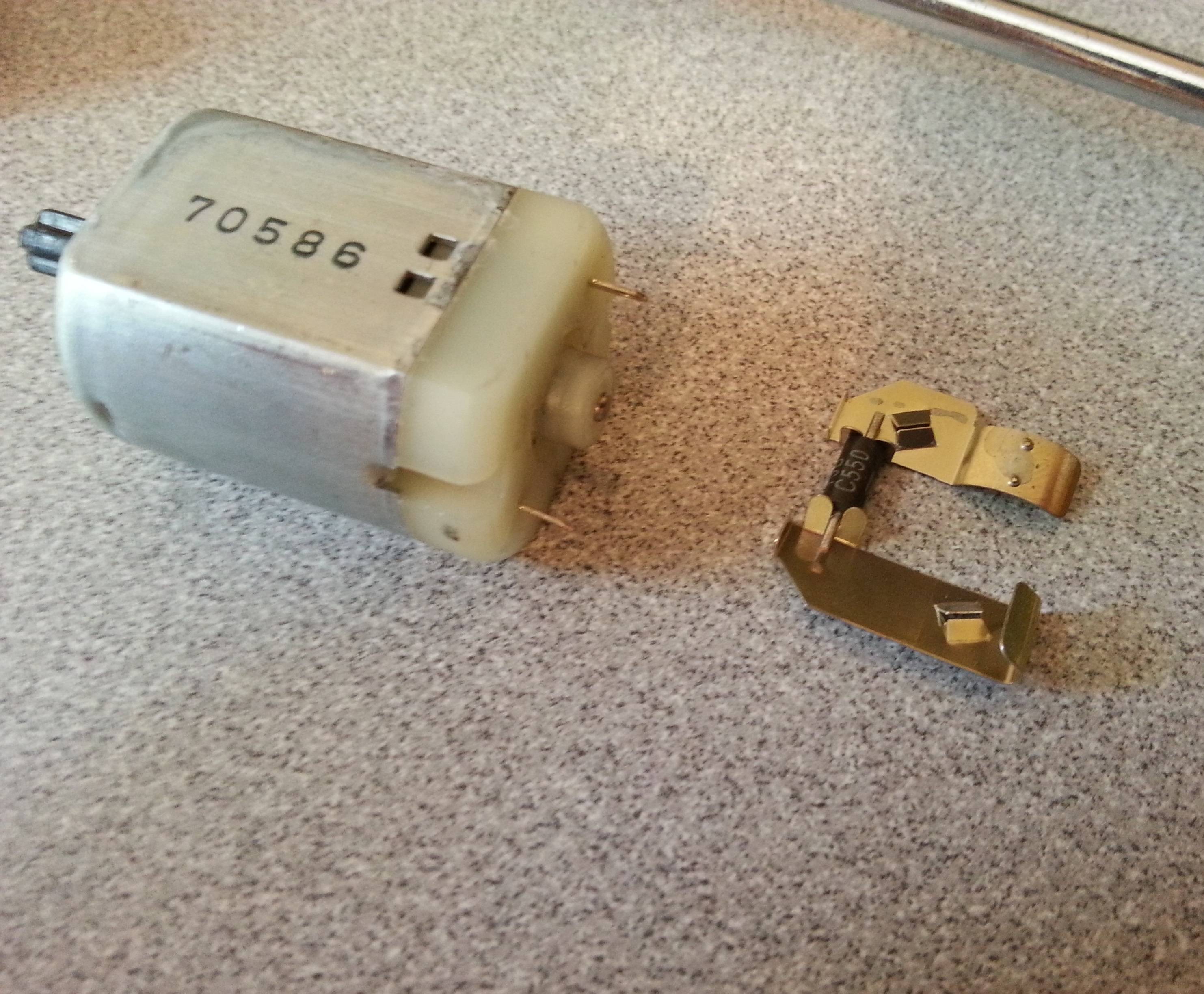 This is where I found out that the motor itself is good if I just connect a battery to it directly, so I think I may end up drilling some holes and have a DIY wire coming out the back - all the contacts on the inside seemed good and clean, but unfortunately the bottom seems to be rusted to the point of not making contact anymore.

I think it will snap back together just fine, but it will have scars from the surgery.

Not the answer you're looking for? Browse other questions tagged motor customization repair disassembly discontinued or ask your own question.

9
How to fix my XL motor?
4
I need help with a broken LEGO motor
4
How can I controll the speed of motor using gears?
4
Faulty NXT Motor
5
How do I diagnose a problem with electronic bricks and motors?
6
How do I connect two models to one PF motor?
3
Can I convert my train 9V 4563 to the Power Functions motor?
3
How to safely straighten 2569 Lego Antenna Whip 8H?
7
How to disassemble the propulsion wheels of the LEGO/DUPLO train engine base part# 28743 drivetrain?