How important is a center differential on a 4WD model?

I am looking to make a 4WD, single-engine powered vehicle, and I have seen others such as this which use three differentials to distribute the power to all 4 wheels: 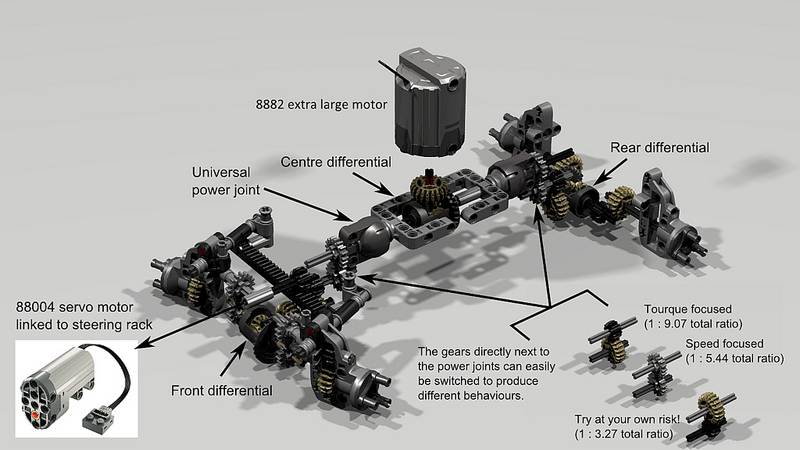 I am not quite understanding the need for the center differential - what would happen if you simply had one gear drive two followers, i.e. one for the front and one for the back? traditionally a differential is used when one side would spin more/faster than the other, such as when a vehicle is turning, but I am not imagining a situation where the front end will travel more than the back end, so why was it designed like this?

P.S. - yes, there is all sorts of discussion in that thread already about the center differential, and the tldr version is that it's dead-simple to replace if you want to, and many people have their own opinions, but not so much "why" or where the forces go/what it would look like if you do remove it

There are all kinds of situations where the front and rear axle may not rotate at the same speed. Imagine for example a bicycle taking a turn while remaining vertical. When viewed from the top (using a planar projection), the bicycle rotates around a point that's at the intersection between lines perpendicular to each wheel. Here's an ASCII-art illustration of the situation:

Well, the center diff allows the front and rear axles to turn at different speeds, which is useful to put less stress on drivetrain parts that are constantly moving around. However, for a Lego model it is probably not required, since it most likely would not move at speeds required to necessitate one. Building one in would add realism, but you would need to keep in mind that with a center diff, the torque all tends to go to the axle with the least traction.

EDIT: Why the front and rear axles sometimes move different speeds, why it matters

Imagine a four-wheel-drive vehicle, with a center diff, moving at a decent speed. It encounters a bump in the shape of a half-sphere, approximately 2 inches across, on the right side. The right front wheel will encounter the bump first. As the vehicle drives two inches over the bump, the rear wheels both travel two inches. However, the right front wheel, following the shape of the bump, travels pi x 1 (the radius of the bump) inches, or approximately 3.1 in. Since the right front wheel covered a farther distance than the rear wheels during the same period of time, it went faster than they did. This translates to a slight difference in speed between the front driveshaft and the rear one, which is easily handled by the center diff. However, the same scenario applied to a vehicle with no center diff could bend or break the driveshaft, as the rear section and front section try to go at different speeds. At LEGO scale, however, this difference could probably be absorbed by the flexibility of LEGO parts without incurring any damage.

25
How can I make a working pin tumbler lock?
7
How should I model a Heroica Banquet hall?
13
Mechanical auto-unblocking mechanism
6
How do I make my logo/mascot into a custom LEGO model?
8
How to build a limited slip differential?
9
Technic 8858 Rebel Wrecker alternate model impossible to build?
53
How do I center a 2x2 plate on a 3x3 plate?
8
Stuck on 42066 Air Race Jet model B
10
How can I assemble 2 opposing gears so that the axle rotations are perfectly parallel?