I've got the 42034 Quad for my birthday and it's been really fun to play with technic after so many years.

I am very curious about one thing, though - how does the pull-back motor (12787) work and look internally? I'd unscrew mine but I am afraid I'd damage it.

I am guessing it probably uses some kind of spring and/or rubber bands to build the pressure but I'd love to know it's internals precisely.

Another type of pullback motor has a detailed structural disassembly here: Imgur album.

I think your motor should work mostly the same way, but I wasn't able to source such internal pictures. 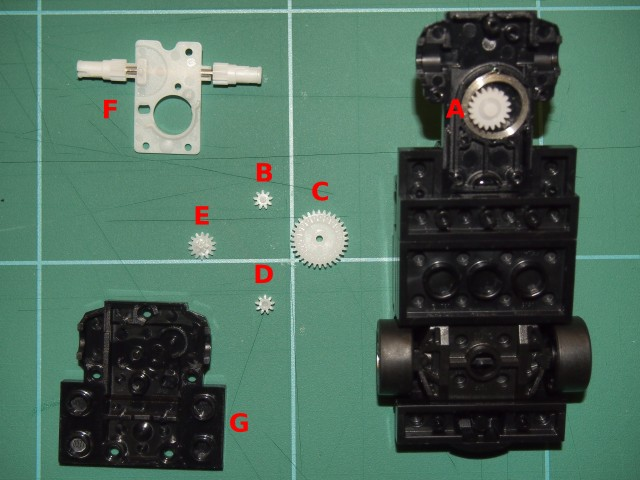 Not shown: 5 X-head screws Note: Gear A may be detached from Spring. I attached it such that it won't fall out when flipped upside down. 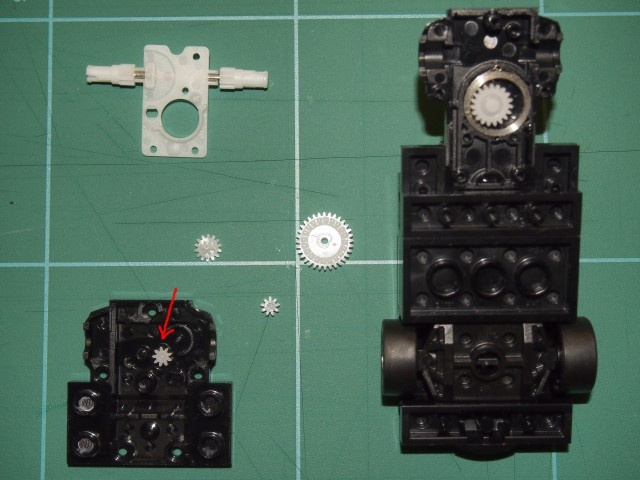 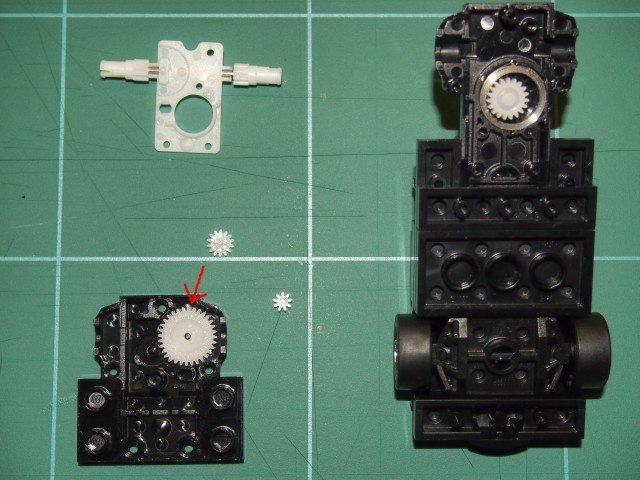 Install Gear C. Place Gear C into the hole in Gear Assembly G. The larger gear is on top. Gear C will cover Gear B and mesh with it (though Gear B has some play since it is in a slot) 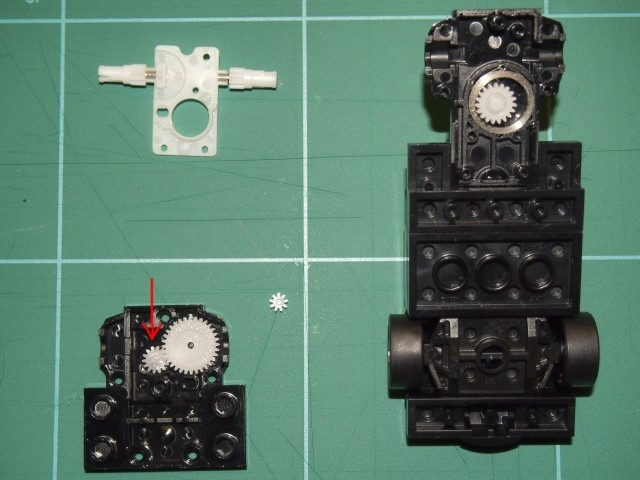 Install Gear E. Place Gear E into the small depression in Gear Assembly G. The larger gear is at the bottom, and will slide under Gear C. There is a pin facing up. Gear E will mesh with Gear B. 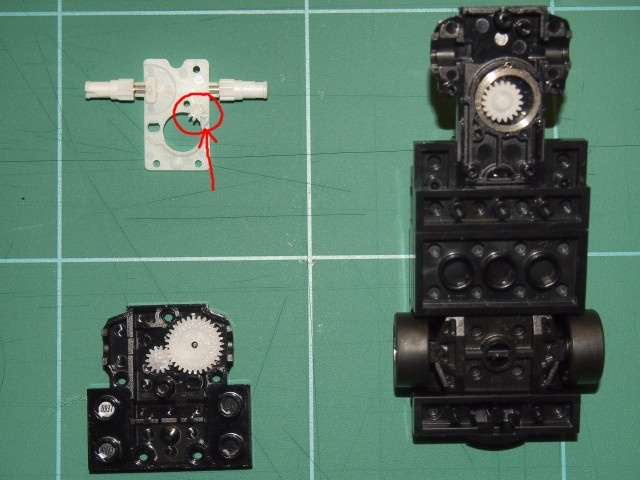 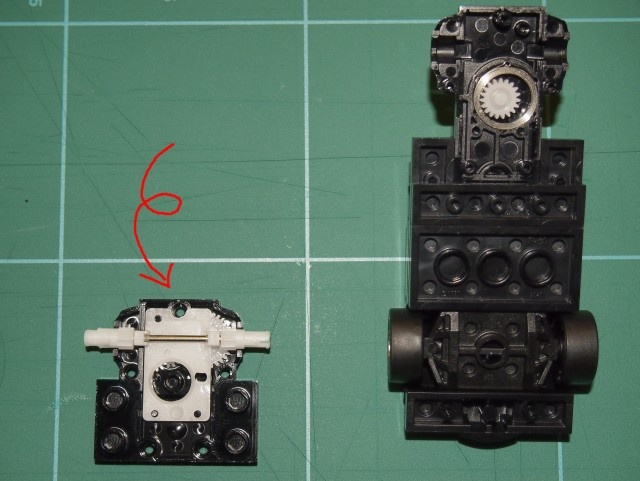 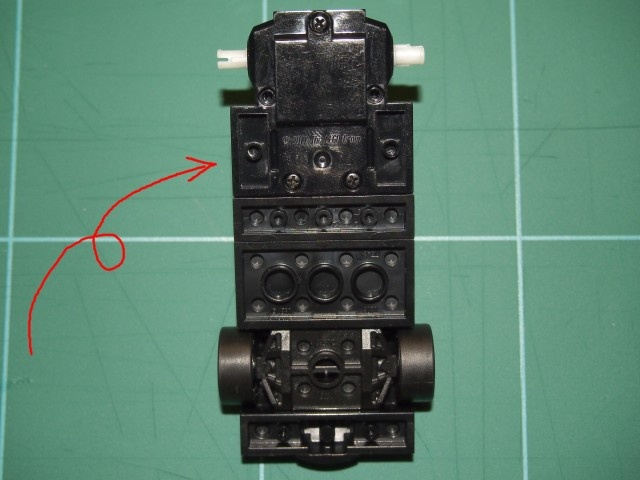 Reattach the Gear Assembly G to the Chassis. This step is tricky. You will need to pinch the Gear Assembly to keep parts in place, then place the Chassis on top of the Gear Assembly G, and move it around until Gear A connects with the correct hole and mesh with the other gears. Then, holding everything tightly, flip it over, and start installing and tightening the screws in a diagonal pattern. Don't over tighten the screws, you should install at least 3 screws first (one on top, two at the bottom), and test that the spring is engaged with Gear A and you get a pull back action when the wheels are turned. After that, install the rest of the screws and tighten all of them. 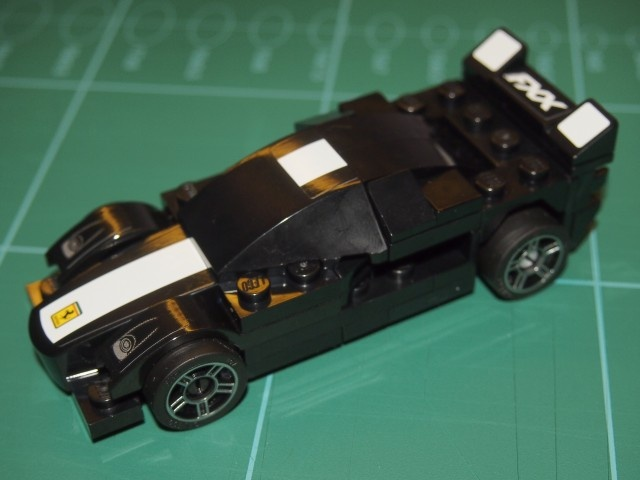 The pull back action works, but I can't figure out how to fix the torque on the spring. So the car is no longer a race car but a jalopy!

17
How much does a LEGO brick weigh?
4
How does the remote control on the 9398 4X4 Crawler work?
12
How does LEGO handle the breakage of Hero Factory sockets?
6
Why does the pin recess on the Technic turntable continue to the edge of the part?
8
What other uses are there for pull-back motors?
5
How much does the NXT brick weigh?
3
What are the significance of 3 marks that appear on the back of base plates?
6
Does the LEGO “Power Functions Extension Wire” (8886) work in both directions between old 9V and new Power Functions devices?
2
How to prevent PF M-motor from springing back
10
How can I make church bells with a pull cord?