I need an NXT motor adapter

I'm trying to get an NXT motor adapter to this that I'm getting: 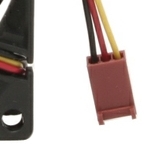 If you don't recognize this, the parameters said : 80mm

Please tell me what this is called so I can look for it.

The adapter itself is generally called a "Molex" adapter. The one you have pictured looks similar to their Mini-Latch style.

I would recommend an adapter like this. The pin spacing should be the same even if it is not made specifically for that connector.

Alternately, you could cut a NXT cable and solder it directly to the fan wires.

Also, you didn't say, but the fan is probably 12V and the NXT can only supply battery voltage, which is only at most 9V with fully charged batteries, so it will run slower than it does when connected to a 12V power supply.

Not the answer you're looking for? Browse other questions tagged nxt motors or ask your own question.

26
How can I use more than three motors with one NXT brick?
4
Unable to connect to NXT using NeXTTool via USB cable
3
Are variables always global with NXT?
6
How do I get the Mindstorm EV3 software to recognize an NXT brick via Bluetooth?
5
How can I tell if my NXT motor is faulty?
12
Can I build a faster LEGO train motor?
2
Connect 39k3 powerpack to 417j3 motor
3
Angular resolution of NXT motor
2
How to retrieve a deleted program file from the lego NXT
2
Where's the iNXTG app for programming NXT from iPad?