What causes these 'bite marks' that appear consistently on new bricks?

I purchased a set (second hand) which has the following defects on the 75°-sloped, inverted 2x1x3 blocks: 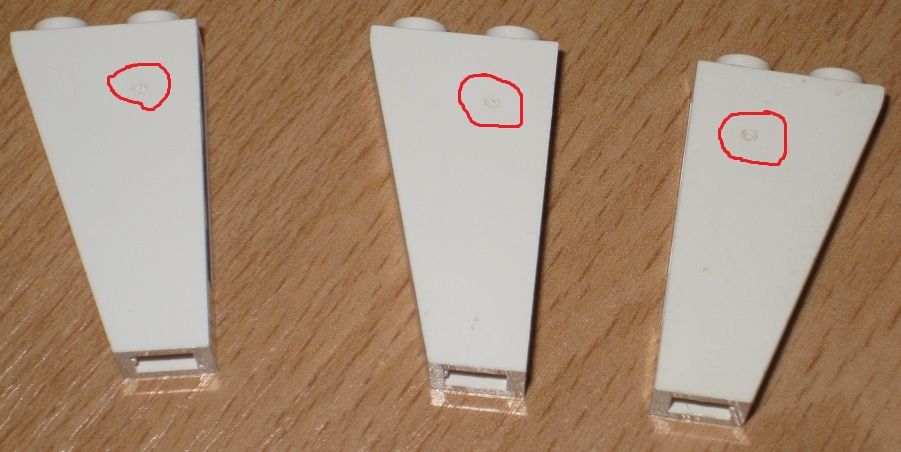 I assumed they were teeth-marks and asked the seller for replacements, and he found and ordered some online. But when they arrived, they all had the same defect. Is this common on these pieces? Is it just a manufacturing quirk, or actual damage?

As said, this is the point where the injection happens, usually known as a gate.

Sometimes, LEGO tries to have in a non-visible place, but the process of moulding is extremely complicated and forces specific requirements on the gate placement which mean it's sometimes impossible to hide it. The basic rule of thumb is that the gate is usually near the center of the part (in terms of quantity of plastic) so that the molten plastic reaches all ends of the element at the same time. Sometime a part even requires two gates.

In the case of your slope, it's probably annoying, but sometimes it's worse. In this glass panel for example, the gate is right in the middle. It wasn't really a problem in the beginning, since that glass panel was used in combination with a three panes window frame and the gate was hidden behind one of the bars of the frame.

Then they released Cafe Corner with full window frames and the gates were in plain sight. In the middle of windows. Now that's what I call ugly.

These aren't defects, they're a scar from the moulding process, it marks where the plastic was pumped into the brick. It's more noticeable on some bricks more then others, every brick manufactured this same way should have a similar mark.

I grabbed an image off google that shows a basic molding process: 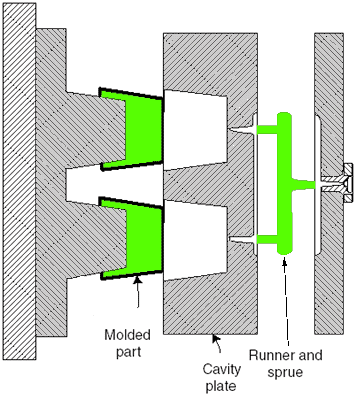 As others have mentioned, the location of the gate is where the liquid plastic flows through into the cavity, and this is the mark that you are seeing. Some times these markings can be polished or sanded away, but for Lego, that would probably effect the texture of the part, so they can't 100% hide it.

As Joubarc mentioned, the molten plastic needs to fill the cavity before it starts to cool and solidify, so the gate is chosen based on where the cavity can be filled the fastest and evenly. Evenly, because you usually don't want part of the piece to solidify before it fills the cavity, otherwise you could have unfilled parts or warped pieces from cooling in different spots at different rates.

Not the answer you're looking for? Browse other questions tagged manufacturing piece-information or ask your own question.

9
Why are there scratches on new bricks?

25
Why are old LEGO bricks more brittle than new ones?
30
What kind of plastic are LEGO bricks made of?
13
How does LEGO handle the breakage of Hero Factory sockets?
4
Why are new LEGO bricks softer than old ones?
9
Factories that could make off-patent bricks?
7
What are these bricks with filled interior and holes/tubes going through?
2
What are the significance of 3 marks that appear on the back of base plates?
4
What set(s) are these 2x2 hexagon bricks from?
9
Why are there scratches on new bricks?
8
What would be the origin of these 1x1 bricks with the top part and stud having a different color?