Recently I've been working on a car which when going forward is fast, and when going backward automatically goes slowly. Here are two photos of it: 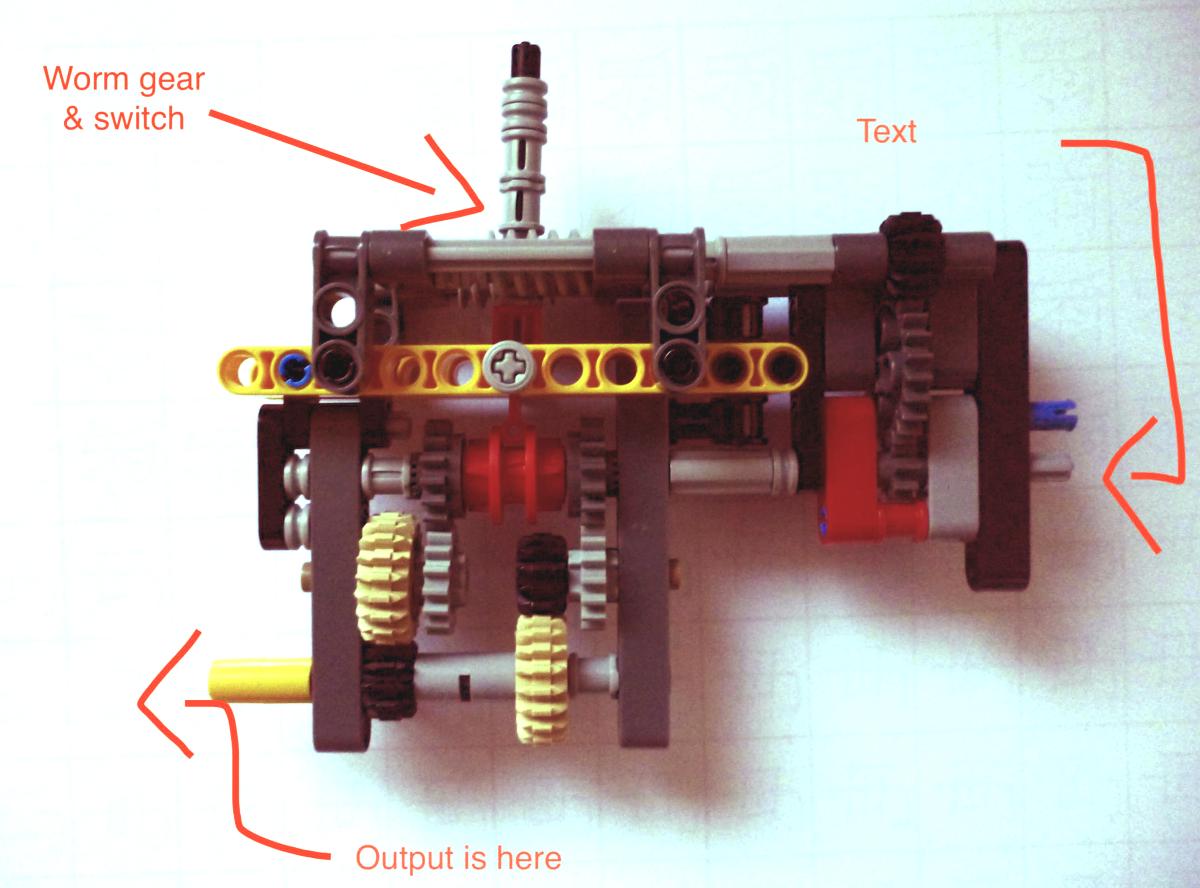 (Just replace the text by "input") As you can see, it uses a switch to change of speed. 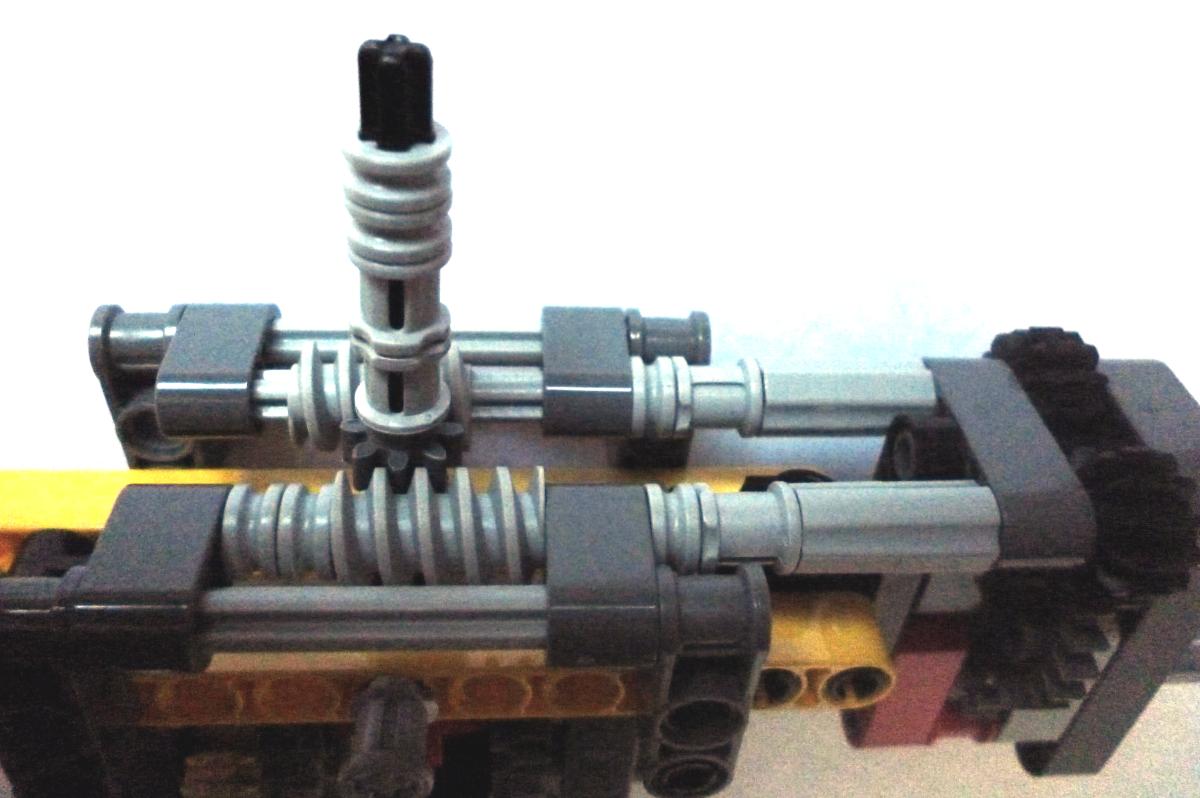 To make the system work, the motor not only turns the most visible circular gears but also the worm gears. And then these worm gears move the switch and the speed is automatically changed.

Here is my problem: Once the 8-tooth gear between the worm gears gets to one end, it won't go back. Plus, when it is going from left to right, the motor has a big difficulty turning the worm gears. I want to avoid using a rubber band, so can someone help me?

I would suggest another solution. On the 9396 helicopter the blades can only rotate in one direction, because when a backwards rotation is input, a gear in the transmission line is lifted away from its neighbor automatically. In the instructions it's here (the yellow L-beam lifts up): 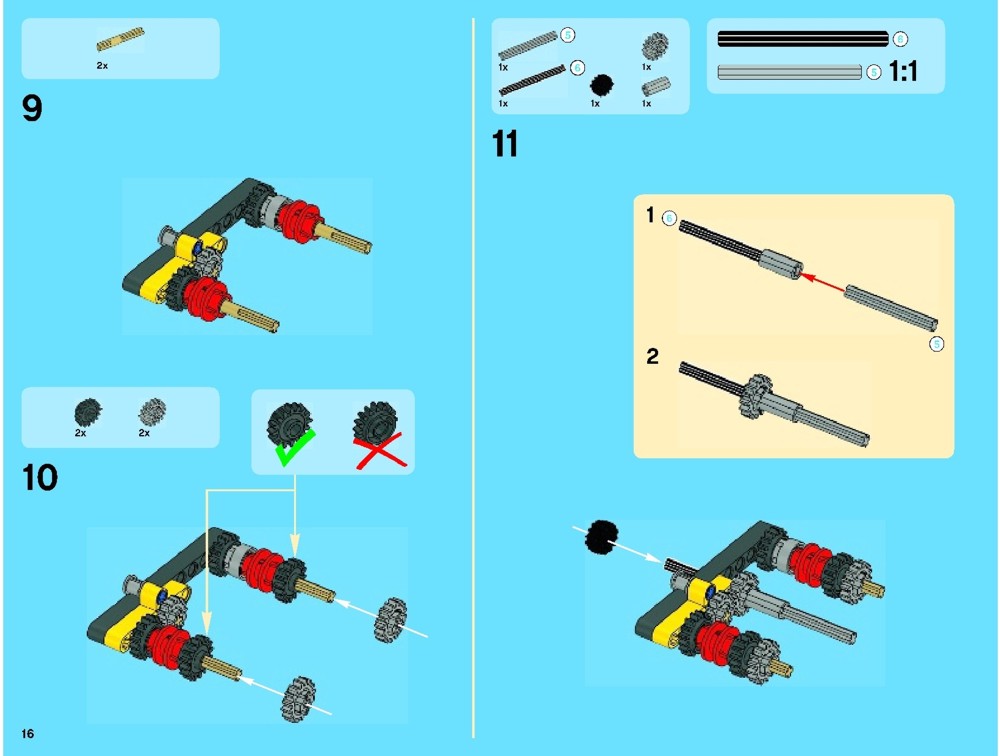 Where the gear is lifted away, place another gear for it to interact with there, which would be the transmission for your backwards drive.

I would try to action the switch with a rotating motion directly applied to it; on your picture it seems you're just holding it in place with an idle grey axle and trying to move it with a somewhat clever, but complex, mechanism.

You can use a torque gear to prevent the movement from going too far; but there's probably a more elegant solution using a differential to split the output to both your gear train and the switch. Assuming the load on your gear train is important enough, the power should first go to actuating the switch; and when that is blocked, it should revert to your gears and wheels.

This means you have to make sure moving the switch is always the easiest thing to do even when it's in the middle; as such you may also want to make sure to use a smooth axle joiner instead of a ribbed one; and you'll want to have some basic load on the gears even when the switch is in the neutral position.

On the other hand, I'm confident there should be a way to achieve a similar effect (different speeds according to the direction) using other means, such as multiple differentials and maybe some wheel only able to rotate in one direction.