Why does this program work in LabView when targeted to computer but not to NXT?

This works when the target is set to computer in Labview, but not when set to NXT. When set to NXT, once the first object is detected, it will stop. But, if the object is removed and there is no longer any object within 30 centimetres of the ultrasonic sensor, the robot will remain stationary and not move forward.

Here is a screenshot of the block diagram: 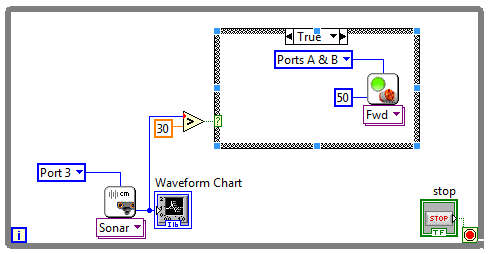 Here is a link to the source code for the program.

Any help would be greatly appreciated.

I would recommend you post this question to the National Instruments Discussion Forums. We have a dedicated board for supporting the LabVIEW for Mindstorms software. Since you are using LabVIEW, you can post the question there and NI support engineers are guaranteed to help you. http://forums.ni.com/t5/LabVIEW-for-LEGO-MINDSTORMS-and/bd-p/460

Not the answer you're looking for? Browse other questions tagged mindstorms nxt programming labview or ask your own question.