LEGO variant, or is it?

I'm in the early stages of sorting through a mothballed childhood collection of over 20,000 pieces mainly dating from about 1980 to 1992, some of which I will keep for my little boy to play within the coming years with a proportion to be sold on to raise funds.

In among it all is a quantity of these which I suspect are not genuine LEGO, but perhaps someone here knows precisely what it is? A lengthy Internet search has so far proved fruitless so I'm hoping for identification here.

Firstly it is perfectly LEGO compatible, the same dimensions. There are no tubes underneath and they have studs that resemble those of Technic beams. Baseplates have a crisscross pattern underneath and window elements with a couple of lugs to aid location.

The plastic seems slightly thinner than the real thing, less flexible, more brittle, with a tinny sound when chucked into a pile. Corners are rather round and the side walls aren't as flat as modern Lego bricks. There are numbers molded into the undersides of the bricks, possibly factory codes.

I've got a bag of several hundred pieces and would part with them if there turned out to be someone collecting them. I've assumed they are probably not made by LEGO unless very early examples but research so far suggests that isn't the case. 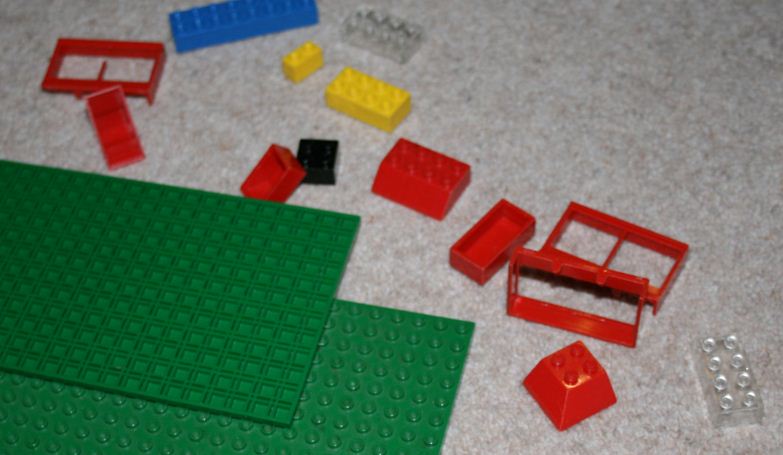 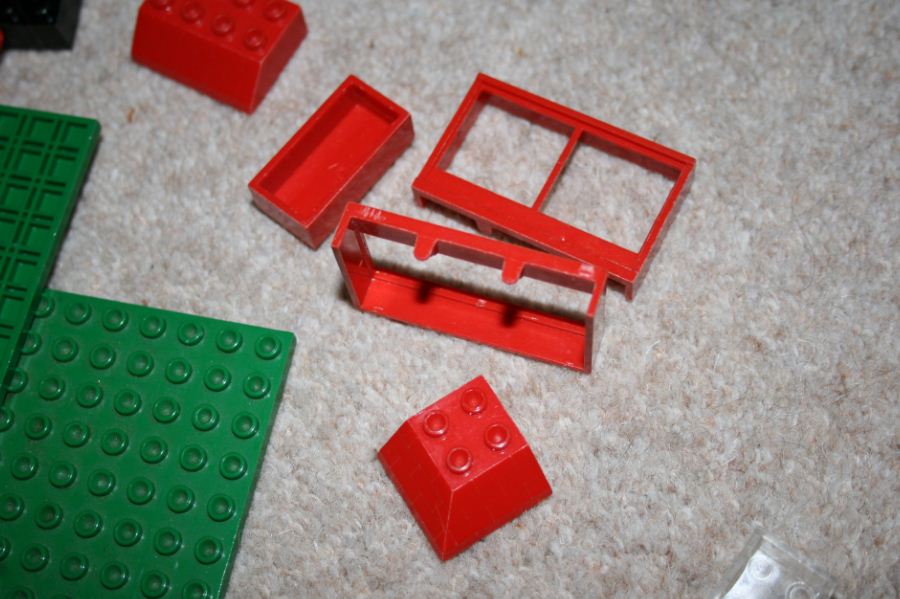 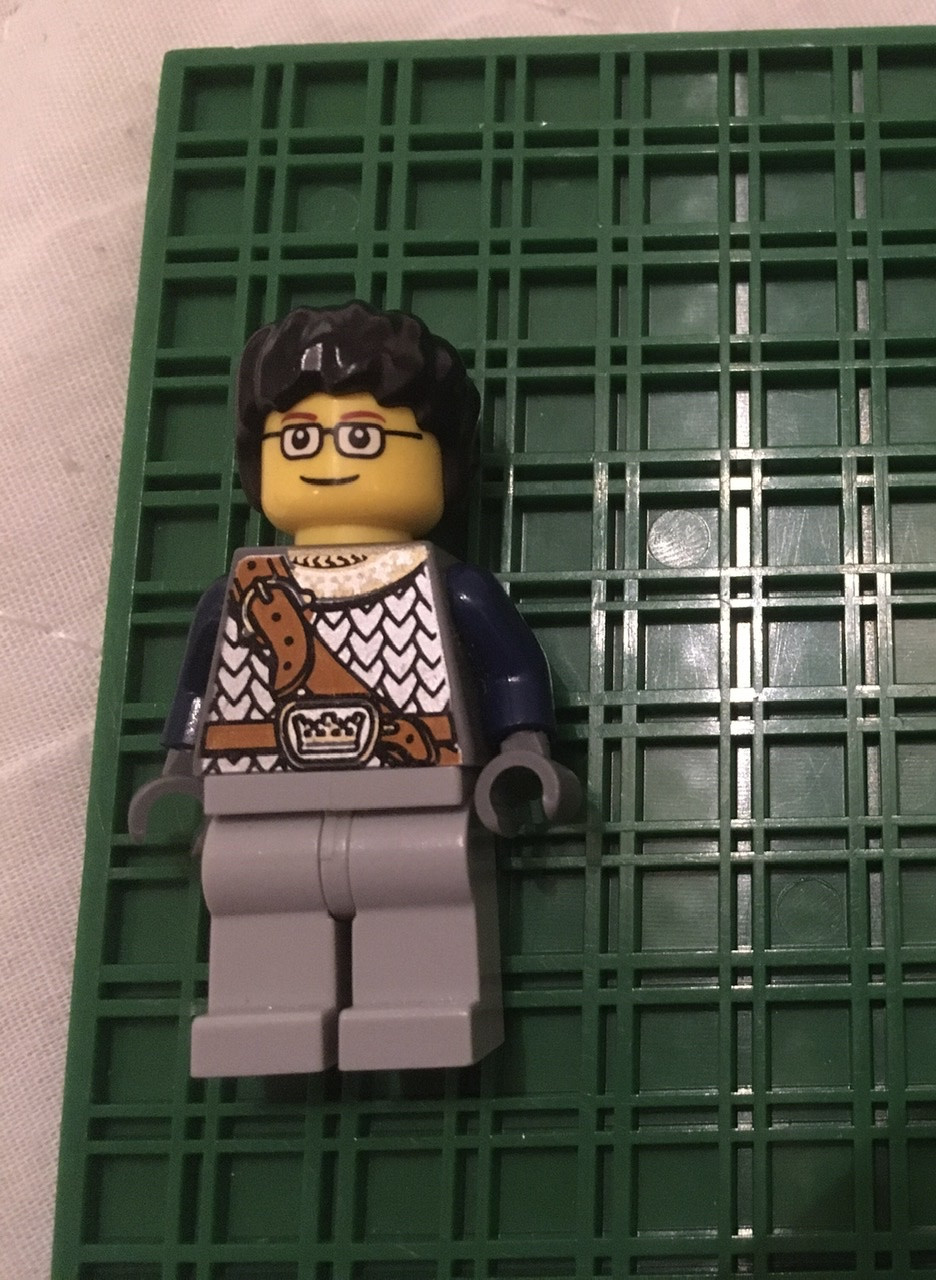 At first glance, many of those pieces look very similar to pieces from the 1950s/1960s, and in the 1950s there are some lego sets that use a different type of plastic than ABS (cellulose acetate), along with certain other features I see here, but looking closer at the details and what pieces are "known" in brick databases, there are several details that just don't look quite "right" to be real legos, and I think you're correct in your assessment that these are much more likely be some sort of knock-off brand of unknown vintage.

Toys Period is one of several sites with a database of lego parts and what sets they are in. In their list of lego windows https://www.toysperiod.com/lego-set-reference/parts/windows-and-doors/windows/ I do not see any windows with dimensions 1x6x3 with two panes (with or without glass). There are windows of the same width that are 1x6x2 with one center 2x2 pane and two side 1x2 panes, and 1x6x3 windows with a single pane (both of which I've seen in actual sets as they are fairly common), but not 1.5 stud panes on a 6x3 window. But even looking at the 1x6x3 window that is a single pane, the details still seem wrong. The bottom of the window only has nubs to connect the window every other stud instead of every stud. Every picture I could find of genuine old legos of that vintage either have nubs between every stud, or was completely without nubs on the bottom. And the pattern carved above and below the space for the window "glass" doesn't appear to have the correct groove pattern.

Next, the large green plate. the tops of those studs are hollow (actually, the tops are hollow on all the pieces shown), which is sometimes used in legos, especially modern legos so that they can hold small parts like flames, but usually not on large plates, and having every piece in the set have those kinds of studs would seem incredibly surprising... And although I have seen old lego plates with square holes on the bottom, from the period before they switched to round pegs between studs, the genuine ones I've seen have a single thicker "bar" of plastic between each stud not two parallel strips of plastic between each stud.

Most of the other pieces in your photos are too blurry to really identify at great detail, but already there just seem to be be too many things "off" about these including other details you mention (aside from the numbers molded into the underside, which is a feature also present in genuine legos of older vintages)

It's hard to be sure from a picture, and I know people who know a lot more about old parts than I do.

I have seen LEGO plates with the structure of squares underneath, I believe they had a single wide wall between the holes though.

If they are LEGO they are older than 1980, is there any chance you got some old stuff that some of your relatives had lying around?

2x4 bricks without bottom tubes have been made, but those that I remember having seen, didn't have recessed studs, and the studs were "hollow" seen from below (see http://www.bricklink.com/v2/catalog/catalogitem.page?P=bhol04#T=C).

The windows look slightly different from what I've seen from LEGO.

The slopes in your pictures don't match anything I've ever seen or heard of.

I have a bunch of pre-1980 bricks, and those windows at least appear to be real LEGO bricks.

10
Is this antenna a LEGO piece?
10
Is this skateboard piece LEGO?
4
Are these parts really LEGO?
4
Which of these parts are LEGO elements?
17
Are these bricks old LEGO/Duplo clones?
3
2 Red LEGO compatible bricks
10
Different brand, slightly bigger than Lego
6
Are these LEGO windows?