When did piece markings change from DUPLO to LEGO?

I've looked at some of the DUPLO bricks I grew up with, and compared them to newer ones. I've noticed that the knobs on the older bricks say DUPLO, while the newer ones say LEGO.

When did this change? 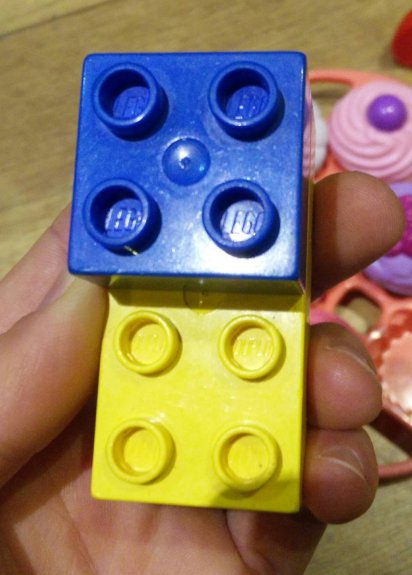 In 1975, Duplo became its own product brand, with five sets made up exclusively of Duplo bricks.

In 1977, the Duplo name was dropped in favor of Lego Preschool.

The name Duplo was brought back in 1979, along with a new reworked logo.

Although I haven't found this information yet (most people likely see this detail as unimportant), it is possible that LEGO started with putting DUPLO on the bricks either when they first came out (in 1969) or in 1975 when DUPLO became its own "product brand". They likely changed it in either in 1977 (when LEGO called it LEGO Preschool) or in 1979 (when they brought back the name DUPLO).

In the Preschool range, new DUPLO bricks were introduced, including arches and the first DUPLO figures, which did not have movable limbs.

Considering the above quote, it is possible that with the new bricks the DUPLO on the "knobs" (as you call them, however the proper name is a "stud") was changed to "LEGO"; this was in 1977 on.

Not the answer you're looking for? Browse other questions tagged duplo vintage or ask your own question.

18
How to build bridge using 4.5/12v train rails from 1969 Lego brochure
4
Why are new LEGO bricks softer than old ones?
9
Is there any way to buy specific duplo blocks from Lego (pick-a-brick style and/or in bulk)?
7
Duplo Activity table to Lego System Table
6
LEGO or DUPLO ringing doorbell
4
Are DUPLO gears compatible with LEGO gears?
5
From what series is this brick? Duplo machine piece with yellow button, copyright 2007
9
Late 1970s hospital and helicopter building brick set
4
Why does the Duplo bathtub piece have an odd height?