How can I make an EV3 vehicle follow an elliptic equation?

Has anyone succeeded in having the EV3 driving base moving following an ellipse? I would like the kids to think about how would we program a satellite orbiting around earth.

They would input the equation for the ellipse and then they will have the robot driving around it. Any thoughts?

I think it would be more realistic to have the robot drive in a straight line but have a linkage to the foci of the ellipse that "pulls" the robot towards the center of the ellipse just as orbiting objects are pulled toward Earth by gravity.

For example, you could use two nails in a board as the foci. Tie a string in a loop to use as the linkage. Place the string loop around the nails and attach to the side of the robot. Drive the robot forwards (no steering). It will travel in an ellipse. You could even attach a pen to the robot to draw the ellipse. 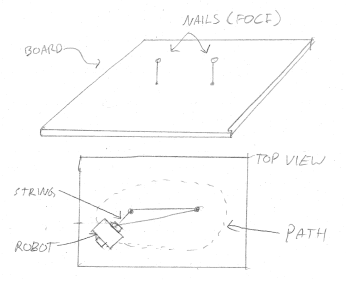 10
How to make Mindstorms respond differently, depending on which sensor is triggered?
6
EV3 Brick Error Symbols?
1
EV3 SPIK3R on Mission 5 just keeps backing up
4
How to make Lego Mindstorms EV3 robot go in reverse when move steering input comes from proximity sensor
3
What is a better algorithm for wall following with an ultrasonic sensor?
0
How to make a Lego Mindstorms ev3 self driving car?
1
Using a remote control for an EV3 robot?
0
Unable to change program name in EV3 IDE
5
EV3 manual recording for displacement