Why are Technic holes slightly smaller than studs?

We know that Lego studs almost never should be placed into Technic holes because studs are slightly larger and will stress the hole. However, why is there this discrepancy? Surely when Lego created Technic they would have considered this possibility. Is there simply not enough room for the hole to be slightly larger? And if Technic holes were never meant to accommodate studs, why didn't Lego make the discrepancy larger to more naturally discourage such a mating?

I'm going to guess that when axles were first introduced Expert Builder was not a thing and the hole size was based on making a convenient path through the 4x2 brick that was the only thing with holes in it. Those holes do not work with studs, they are too large. Even the "new" 1x2 bricks with hole type 1 and 2 didn't accept studs (and the gap/slot at the top prevented it). That allows axle slop, but with the huge parts at that time this was not a problem, in fact it meant low-precision models worked just fine.

In 1970 there was the "Gear Supplementary Set" and "Gear Set with Motor" that had the first mention I can find of axles and gears. 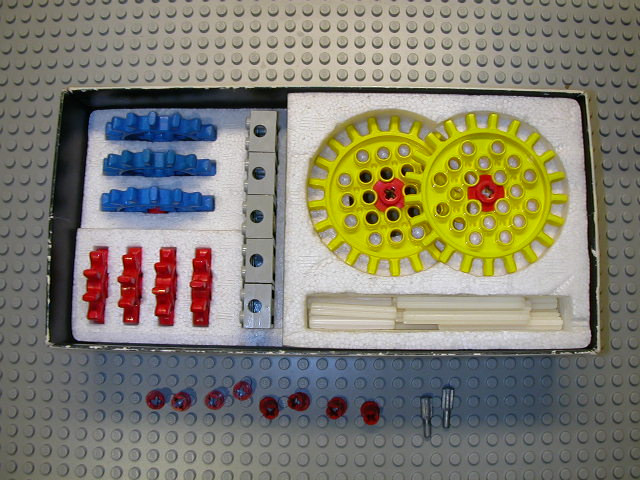 Note that the set is labelled "Universal Building Set" and TLG appear to agree that "Expert Builder" appeared after that in 1977. In 1976 when the 695 "race car" was released it used second variant red axle stops and 1x2 brick with hole type 2 but wasn't Expert Builder.

The 1x2 brick with hole makes it clear that putting a stud in the hole was not possible (this may be the reason for the slot?) 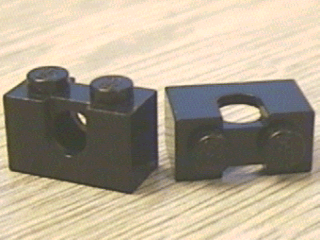 In the early 1970s, Jan Ryaa was one of the very first LEGO designers to play with the idea of building cars, using large square LEGO Mobil bricks in yellow, red and blue with white cross-axles and cogwheels. These were used for showroom models and were not planned as production models, nor intended for sale.

I suspect he was using the production axles and bricks, but trying to make more mechanically accurate/challenging models and found the giant gears and 4x2 bricks a bit useless.

Brickset's history of Expert Builder makes it clear that by the time that theme was launched the "modern" Technic brick was in production. All four models used those bricks, and the hole were as compatible with studs as they are today.

Again, I can't find an official statement from TLG on this, but I will guess that since Expert Builder used existing axles they just ran with that size, only tightening up the hole a little to make their tiny-toothed gears work properly.

EDIT: Answer's wrong, but I'm keeping it here because I don't like to hide from mistakes.

The articles you listed don't say that studs are too large to fit properly in the Technic hole; they say that the hole is in a slightly different position. This causes an alignment issue on the tops and bottoms of the bricks, which leads to stress if bricks are attached across both studs on top. As for why LEGO chose this design, the second article you mentioned answers this: "The Center point was moved up in order to accommodate the additional plastic needed around the Technic hole so that a stud can still fit in the bottom of the brick."

EDIT2: I have a theory, actually. The slightly smaller holes might be a compromise, to allow for Technic bricks to fit a stud on the bottom of the brick without pushing the top too far up.

Not the answer you're looking for? Browse other questions tagged technic history compatibility or ask your own question.

32
Why did Technic bricks have holes in the studs?
37
When did LEGO decide that it was okay to put a stud into a Technic hole?
3
Why remote controls are seldom used in Technic sets?
7
Long train Bridge tension and compression angles (minimum brick count)
3
Why are my Technic blue pins breaking?
9
Why are pat pending bricks rarer and treasured more than patented bricks?
7
Why do Technic beams have an odd number of holes?
4
Which parts have no-friction Technic axle holes?
7
Why are there always holes in Duplo bricks?
0
Are there any cases of Illegal Building in an official lego build?