Are these LEGO Star Wars bricks genuine or fake?

I bought some LEGO pieces from eBay, and I'm not sure if they are genuine LEGO.

I compared them with my LEGO, and every piece of my LEGO has the logo ©LEGO on it. However, only some of the ones I bought have this logo, and some do not. 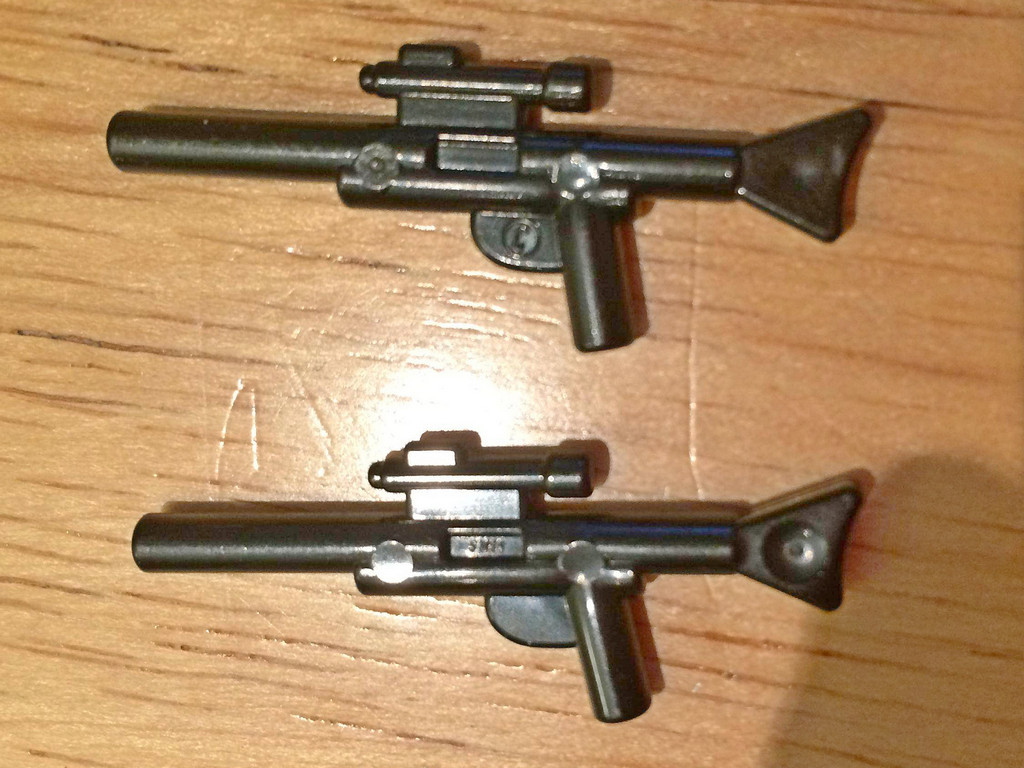 You can see the © symbol on the top gun, the bottom is a gun from my own LEGO collection. If you flip them over, my gun (bottom) has some numbers (I think manufacturing number) and the word LEGO on it. The new one (top) has nothing. Is the top gun just an older LEGO, or a fake knockoff?

Additionally, some of the battledroid torsos have the © LEGO mark on them, as well as some numbers, and some of them have just © and nothing else. 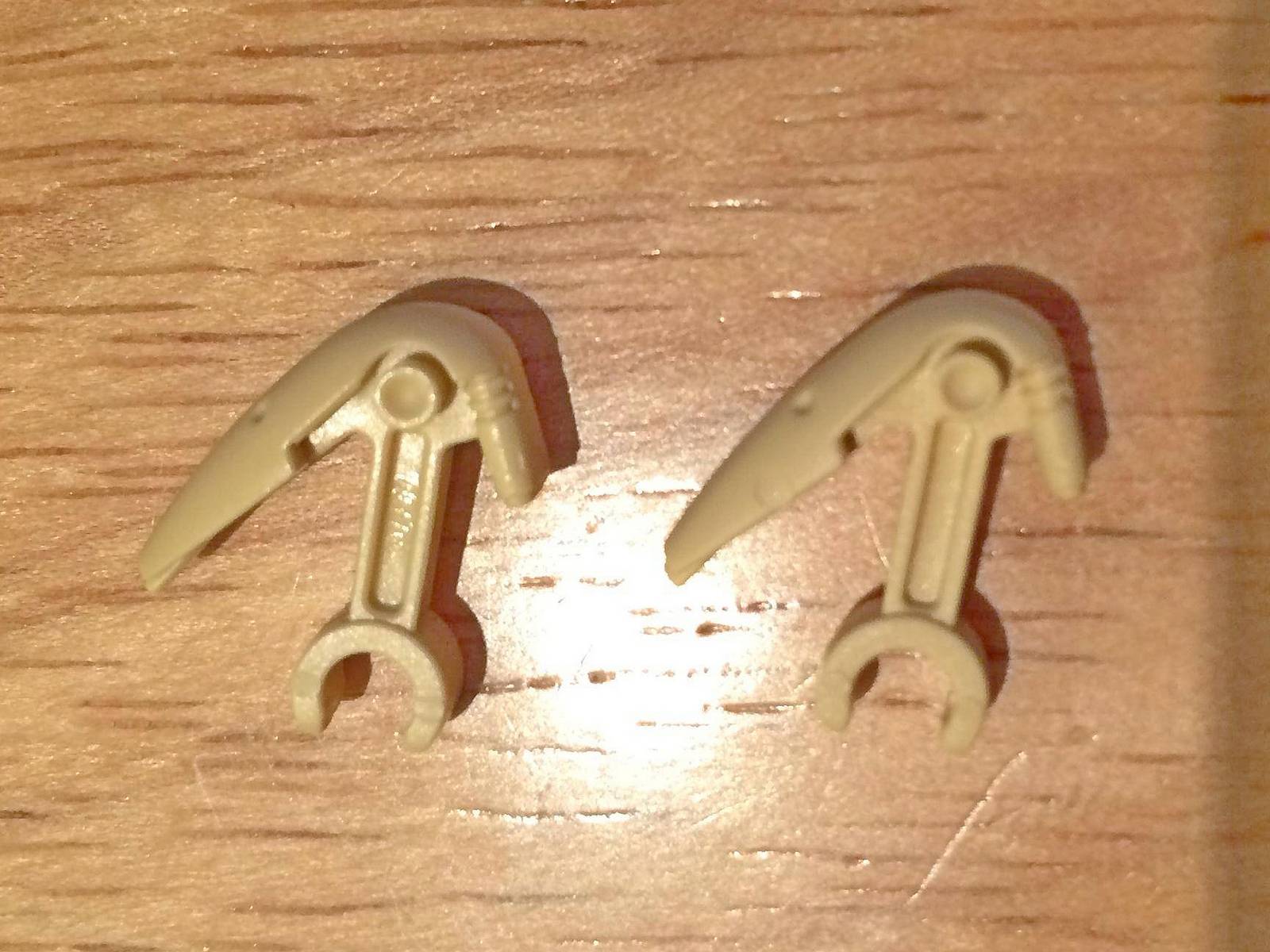 It is the same with the battledroid heads. On the left, my genuine part has the ©LEGO and numbers on the other side. On the new ones in question (right), there is nothing.

I can't find an official source for this statement, but with the exclusion of a few rarities like test bricks, and perhaps a few other cases, every piece of genuine LEGO will have the brand stamped on it somewhere.

You've taken photos of pieces together that clearly ought to have come from the same mold, where one displays the LEGO brand and the other does not. That seems like solid proof that you've purchased fake parts to me.

As an example of how similar clone bricks can be, here are some battle droids made by LEPIN: https://cheap-bricks.com/lepin-05025-star-wars-homing-spider-droid/ 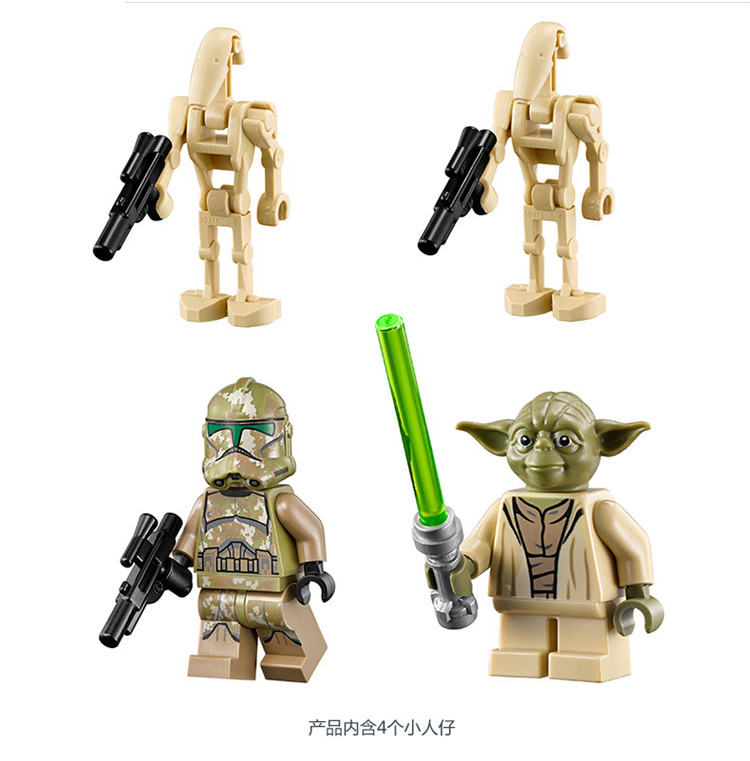 It's hard to see, but I can make out the © on the trigger of the stormtrooper's weapon.

The Star Wars blasters in question are real LEGO. I grabbed a hand-full of Star Wars blasters from my collection and laid them out for comparison. All of these came from sets I bought, brand new. The "C" guns on the left outnumber the LEGO/part numbered version on the right. 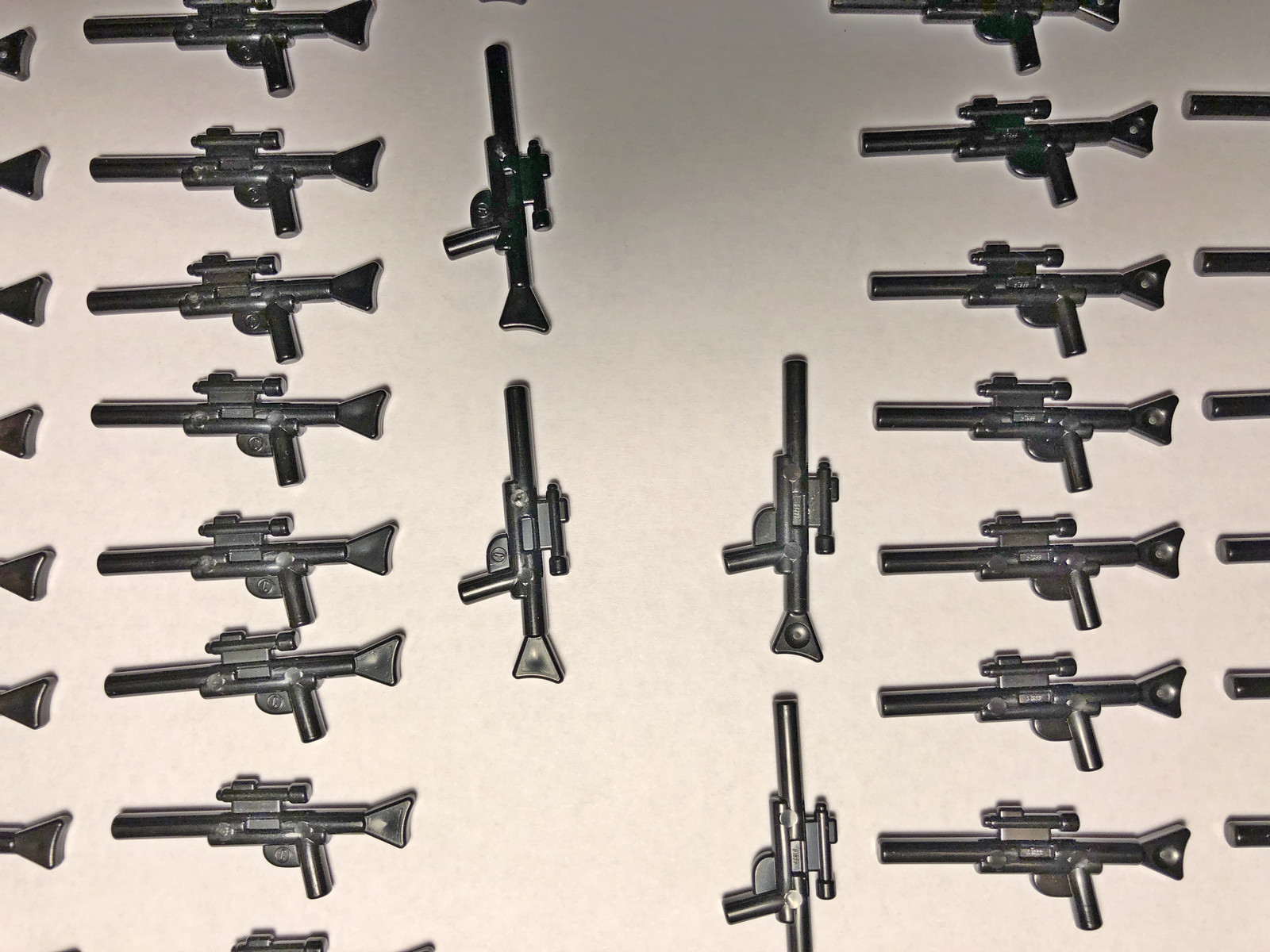 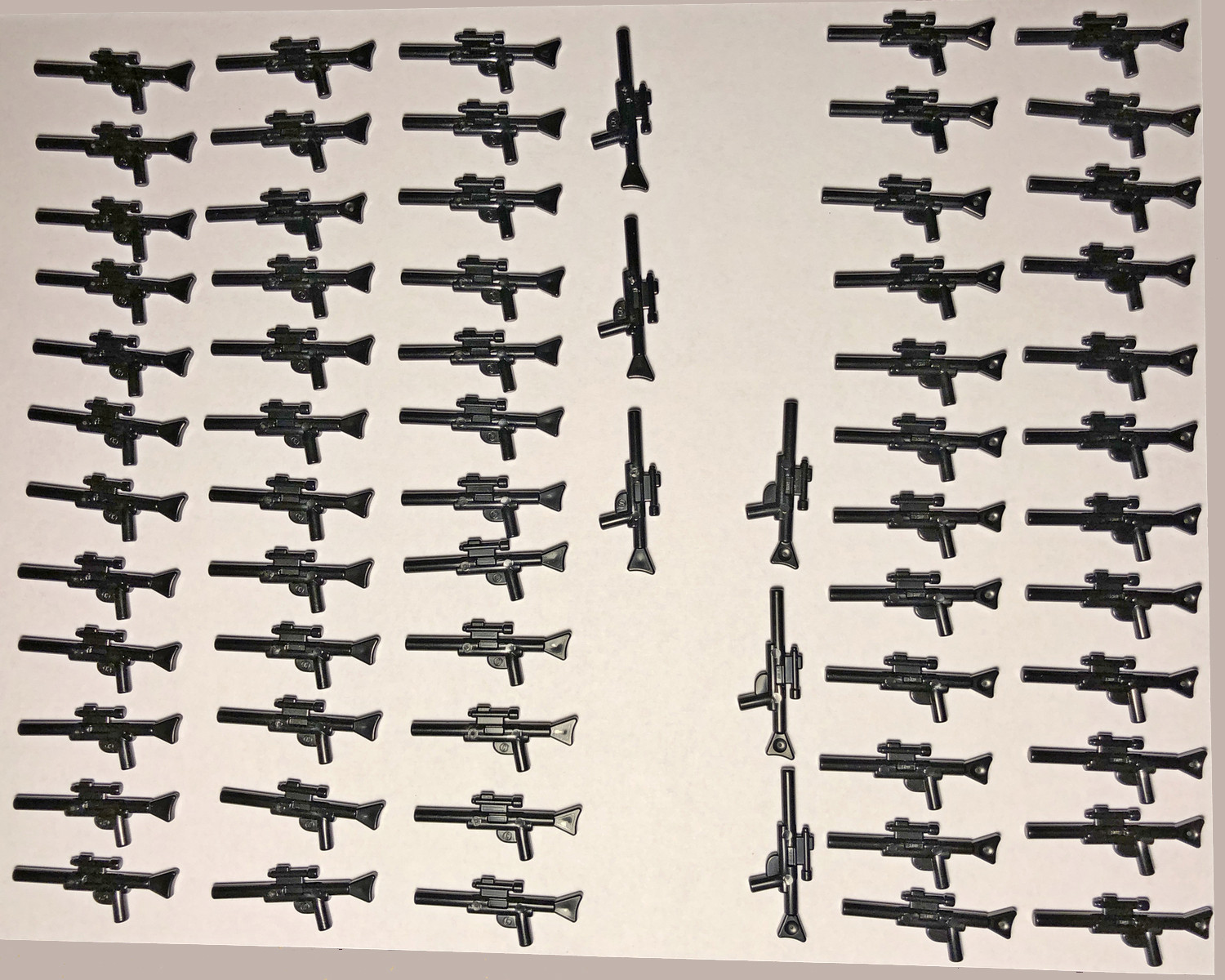 Another hand-full of the short blasters yielded similar results, a lot of them being the "C" version.

I sorted through my battle droids and only some had "LEGO" stamped on their chest. The ones without it had the "C" mark inside their mid-torso with the part number either on the left or right side of "C". ALL versions had LEGO stamped inside their back stud. All of the droids with the "C" torso had no markings on their necks. Only the droids with "LEGO" on their chest had necks with markings. ALL droids had "LEGO" stamped on the rear of their legs under the clip. Some legs had the part number on the front, some did not.

For clarity and any doubts someone may have, here is a typical example taken from a site selling off-brand "Lego" sets using pictures of real Lego sets and pieces: 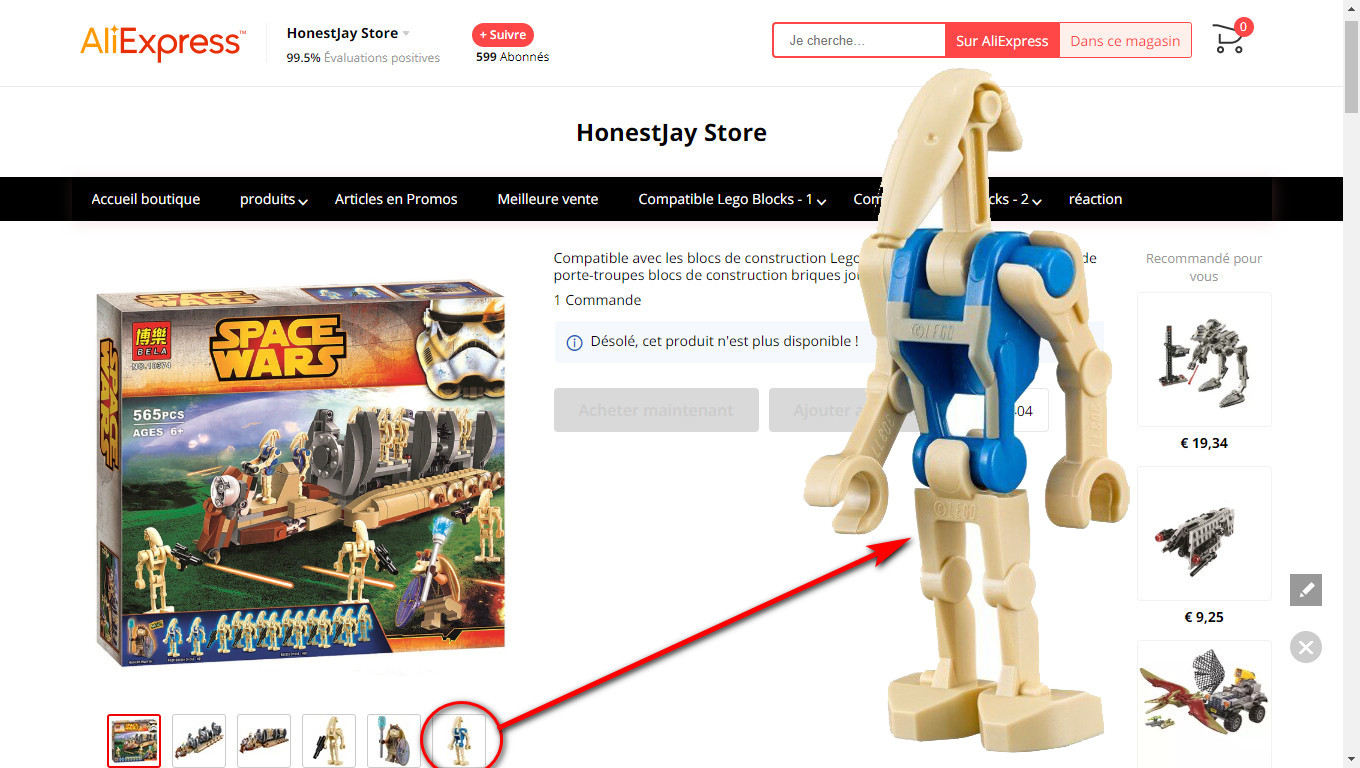 These are most likely Lego. The similarities in the molding is far too similar for these to be fake (unless someone spent obscene amounts of time creating very accurate fakes). The most suspicious thing to me is the © on the trigger section of the rifle. Other than that, they are just too identical to be a knock-off.

Also, the sheen on the plastic seems appropriate. Maybe a little bit aged on the droid head in question, but they tend to dull with age anyway. These look to be genuine.

Not the answer you're looking for? Browse other questions tagged star-wars clone-brands accessories ebay or ask your own question.

10
Is this skateboard piece LEGO?
5
Verify authenticity of the Star Wars Snowtrooper minifig
17
Are these bricks old LEGO/Duplo clones?
11
How To Sort Out 3rd Party Technic Clones From LEGO Originals?
8
Are These Minifig Helmet, Hair, and Stingray Accessories Official LEGO Parts?
6
Are these LEGO windows?
3
Are my LEGO Star Wars Royal Guards with black hands counterfeit?
18
Is this part real LEGO or a knockoff?
5
Can anyone identify these two makers marks (logos) on these "Clone" bricks?