How do you put together a four armed minifig????? 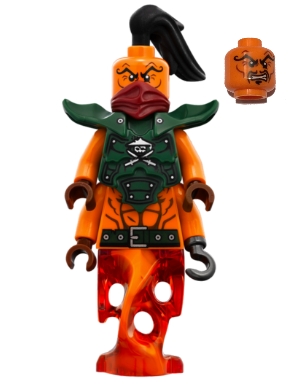 I really want one.

The good news is: This Minifig is still available (as of March 2017)! The bad news is, he's only in two sets and they're both quite expensive. He's Nadakhan, the captain of the Sky Pirates in the Ninjago range. There is also General Kozu, but his set is even more expensive.

As Kevin points out in the comments, Lord Garmadon appears three times in the LEGO Ninjago Minifigures series (Garmadon, Volcano Garmadon (pyjamas), and Flashback Garmadon (suit and tie)), so it's possible the part is now more widely available.

The key part from Nadakhan's body you need is:

Or there are some other options from earlier Ninjago sets available as well.

Which accepts a standard neck post and has holes for the arms.

Also there is Z-95 Headhunter (75004) which has General Pong Krell, but it is also fairly expensive.

Not the answer you're looking for? Browse other questions tagged minifigures shopping minifigure-identification or ask your own question.

17
Is there a standard scale for building “minifig scale” creations?
23
Minifig rotatable legs on a stick - what is this?
9
Minifig with multiple arms?
7
Which was the first set / minifig with two faces to choose from?
7
How to restore minifig faces
8
Protecting a minifig from wear
4
Is there a web resource available to browse LEGO Minifig head designs?
7
How do I see which stores have all the parts I want on Bricklink?
5
Technique for holding a horizontal minifig in place (swimmer)