Why is the LEGO IR Receiver V2 not widely produced? Or are they?

Basically, there are 2 different major versions of the LEGO IR Receiver, the unmarked V1 and the labeled V2. I've also read somewhere there was also a small hardware upgrade to the V1 Receiver at some point, also unmarked, dubbed V1.1. 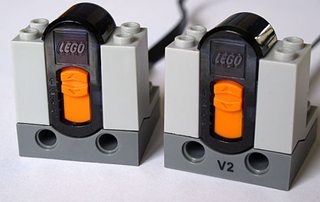 The V2 IR Receiver came in the 2012 set 9398-1: 4x4 Crawler, and is apparently a much better piece of hardware than the V1 series. However it has yet to appear in any other set, or by itself, at least under that label. Some people have speculated the hardware was again silently upgraded, and the hardware on new ones is the newer hardware, without the V2 label. On the other hand, I know someone contacted LEGO customer service about it, but got an unconvincing response that the one they sell by itself is not the same as the V2 (unconvincing, because they didn't seem to know anything about it at first, and were possibly using the same internet resources we have available).

So my question is:

Is the V2 hardware widely available in new products? If not, why is it so rare?

The most likely reason it's not available in new products is that the production cost would be higher and hence also the set price which would make the sets less attractive for most lego customers.

Also there is an issue with the V2 receivers when having more than one M-motor on one output port while this is not problematic for the V1 receivers. It has to do with the high capacitance of the M-motors (for noise reduction) that tricks the V2 receivers into believing the motors draw too much current.

On the box of the 42030 set, V2 receivers are depicted, while the set itself only contains V1 receivers. I contacted lego support about this, they said that actual V2 receivers would likely cause the motors to possibly damage the set and that late in the design process they switched back to V1 receivers without updating the box art.

Performance wise, a good alternative for the V2 receiver is an sbrick.

Not the answer you're looking for? Browse other questions tagged piece-information power-functions remote-control electronics or ask your own question.

30
Why are LEGO slope bricks textured?
11
What IR Codes are the Power Function remotes sending to the receiver?
6
What is new about the IR receiver in the 4x4 Crawler 9398?
13
How does LEGO handle the breakage of Hero Factory sockets?
8
How to improve the range of an IR receiver?
4
How many standard 2x4 LEGO elements are produced in a single 2x4 mold injection?
4
Are there any LEGO elements not being produced because of mechanical problem with the mould?
6
What are the various LEGO motors that have been produced over the years?
3
Why remote controls are seldom used in Technic sets?
10
Why are there 4 wires leading to the Power Functions LEGO train motor?