The booster pieces don't fit into their place on Benny's Dimensions set (71214). I'm talking about the bigger booster in the middle.

This seems to be a really common problem, but is there a fix?

I experimented with several different "rocket" pieces (3963) and both variations of the "tap" piece (4599a & 4599b) despite the set listing only the "b" variant, and could not replicate the issue. There obviously had to have been a "bad" batch (or "fault" as mentioned by TheBrickBlogger) of one of the two pieces that unfortunately made it to some customers. The simplest solution, if you don't have any extra parts of this type, would be to put a tiny piece of paper or tape on the tip of the nozzle before inserting it into the rocket piece. Another suggestion, if you have a couple of 1x1 round plates with open studs (part #85861), is to insert these into the rocket holes to hold the nozzles in place. There is just enough room for them: 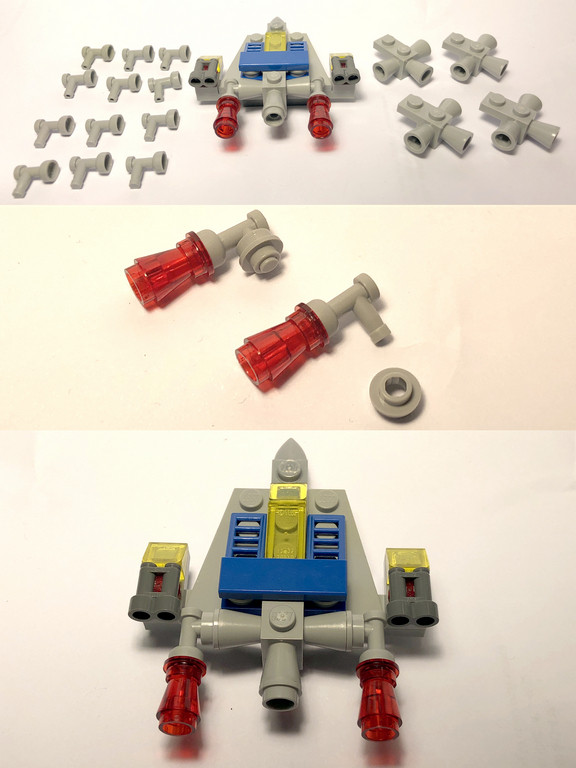 Also, as mentioned above by TheBrickBlogger, Lego would probably be more than happy to replace any defective parts you were to encounter. Even though this is an old question I hoped maybe an answer could still be useful for someone with a similar piece problem. (In case anyone noticed, I didn't have any of that piece in blue for the nose piece)

Not the answer you're looking for? Browse other questions tagged lego-dimensions or ask your own question.

4
Which set is this bag from? It has mostly azure pieces