Recently I disassembled a classic 4760c01 Electric 9V Battery Box Small Complete Assembly to see what was inside. 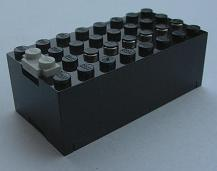 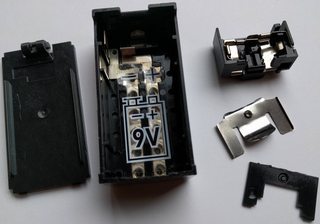 In the switch component, we find what appears to be a current limiter: 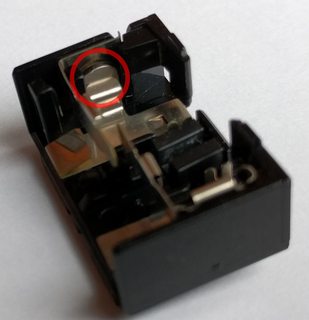 It slides right out if you use a pin or something to push it out.

Here is a closeup on it with one of the other pieces: 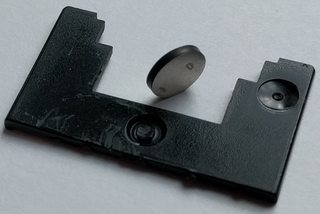 It's a small metallic looking disk with a black edge and some divots on the faces, and no identifying or informational markings.

Based on usage experience, I believe it limits the current to less than what a 9V battery can actually output, but I don't know for sure or how much that limit is. I've search around, but wasn't able to find any information on the current limiters in the battery boxes before the one from 2006.

Does anyone know what the current limit of this old battery box is? Or know a way to discover what the limit is?

The short answer is about 150mA.

From the limited testing that I've done, the component you pointed out appears to be a positive temperature coefficient thermistor. Here's how Wikipedia describes their use as current limiters:

When first connected to a voltage source, a large current corresponding to the low, cold, resistance flows, but as the thermistor self-heats, the current is reduced until a limiting current (and corresponding peak device temperature) is reached. The current-limiting effect can replace fuses.

I only have a basic multimeter and a few fixed voltages handy at the moment, so I'm not able to derive the precise characteristics of this device. I was able to measure the following:

The tolerances on these parts are pretty loose, but for mine the maximum it can supply consistently in series with a motor is about 150mA. If I keep current above this for long, the thermistor begins to heat and total current decreases due to the limiting.

It might seem odd that the max constant current I was able to sustain is greater than the short circuit current, but this is due to the fact that this component is effectively limiting the amount of power it dissipates, and not the amount of current it passes. Power is the product of current and voltage, so because some voltage is dropped by the load, it is able to handle a current higher when loaded than it is able to when shorted.

As a point of reference if milliamps aren't very familiar to you, in my testing I was able to cause the clutch gear (60c01) to slip indefinitely on 43362c01 with the thermistor in series. 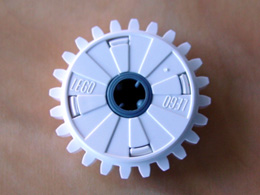 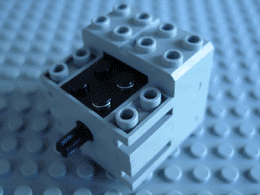 This drew about 100mA for me. So, you can drive most of the lighter 9v parts just fine. The current limiting will kick in at about half the stalled current for most of the motors. Larger PF motors, and especially the RC buggy motor, will not be able to reach their full potential with the overload protection in place on this battery box.

Not the answer you're looking for? Browse other questions tagged piece-information electronics 9v battery or ask your own question.

19
Is it possible to change the battery in a 54604 light brick?
8
Can 10153 9V train motor be powered by the Power Functions Battery pack?
8
Power Functions battery box and receiver limits
5
Battery Acid Dust Issue
6
9V Battery instead of PF Battery Box
12
Replace Battery in LEGO Dino Attack Light-Up T-Rex Head?
5
What is a good third party battery box and receiver?
2
How can I open part #53500 and replace the battery?
4
Battery Box 8881 not providing enough power