Why are these hinged plates slightly different colors?

Something I've noticed is that certain pieces appear to be slightly different colors for other pieces of the same color. In particular, hinged red pieces seem to be the most noticeably different, especially some versions of the red hinge plate. 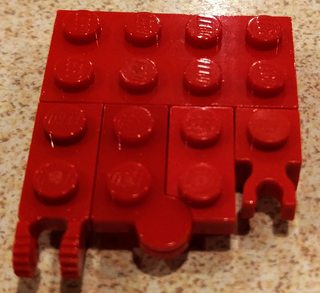 As you can see, half of the hinge plate is quite a bit darker than the other half which matches the regular plates. The 1x2 fork clip piece is also a little darker, though not as much as the hinge plate and it's hard to see in the picture. I remember that hinge plate being that way when I got and 3 others in the 10167 Brickmaster Kit (with Digital Designer CD) back in 2004, so I don't believe it was faded or a defect.

So I've long wondered, what's the deal here? Are the hinged plates made of different plastic, like the transparent pieces are?

Quorneng's answer is spot on, even bricks that were from the same set might have been made from differing batches of a particular color and slight variances will produce differing colors. Purple is the most notorious Lego color for having a great deal of variance between bricks, and red is not surprisingly, also inconsistent at times.

To add to the mix, Lego is changing its formulas over time to keep costs down, and to make the bricks more durable and consistent. Earlier ABS bricks where stiffer and more brittle than modern bricks. They have more of a tomato red color, and are easy to spot next to modern bricks.

UV damage can alter the color of bricks over time, although this can be fixed with oxyclean + h202.

Finally, I believe that Lego will internally recycle 'bad' batches of bricks, grinding up and melting down ABS from lots that don't pass QA. This probably also affects brick color. I had a friend who made the pilgrimage to Billund to see the main plant. He told me about how they have a display that shows the casting of bricks to visitors, and it re-uses plastic for the demonstration. I recall that he commented on how the plastic colors were slightly odd looking, presumably because it had been recast so often. This makes sense to me, but it is a second hand story, so don't cite me for your thesis...

The colour of virtually all plastics, like paint, is an 'added' pigment so it is difficult to maintain exactly the same colour. As others have pointed out some pigments are more susceptible to the effect of sunlight than others - red goes pale - white goes yellow.

Not the answer you're looking for? Browse other questions tagged piece-information colour plastics or ask your own question.

28
Are transparent neon Lego bricks made from a different plastic than usual?
4
Please identify these two kinds of Lego bricks (circa 1990's)
14
Why are these bricks slightly shorter than normal?
18
Why do LEGO bricks yellow at different rates?
6
Help identifying Lego bricks from a picture for a Geocache
5
Why are 2x4 bricks hard to get in certain colors?
2
Why are the modified 1x2 plates with tow ball (socket) only available in light- or dark bluish gray?