Problem with “warping” of LEGO water

I am new to Bricks.StackExchange, but not to StackExchange, nor to LEGO bricks. I have run into a problem and was hoping for some ideas.

I was trying to imitate the cool water technique of Legopard on MOCpages. 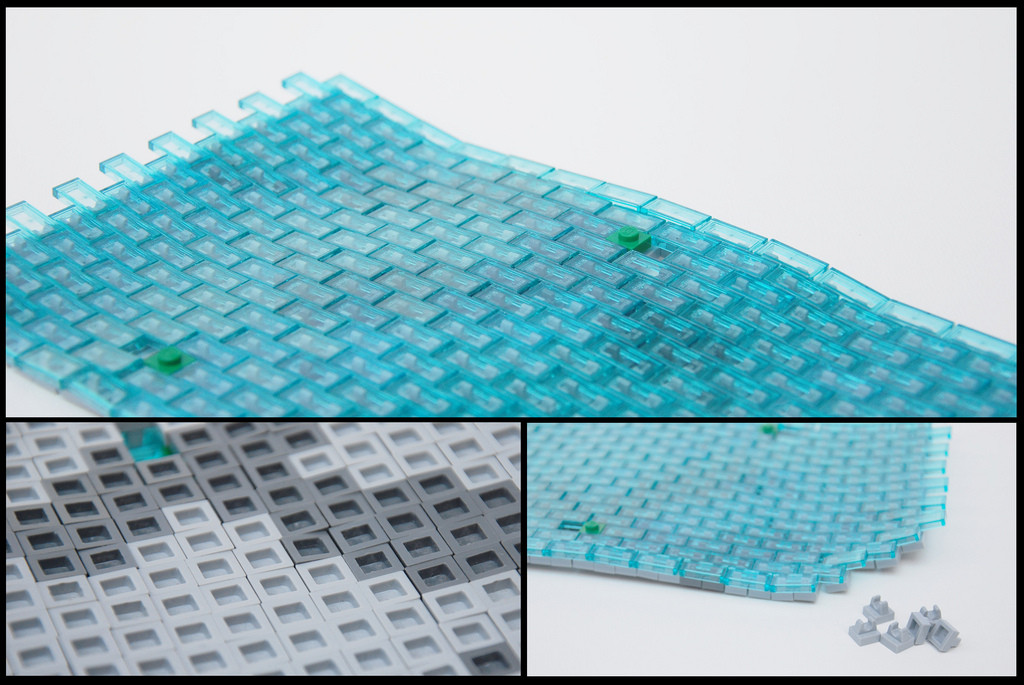 I first thought that perhaps mold type played a role, but building it in either clip type gave the same results.

Next, I tried putting in longer 1x plates below to hold the longitudinal wave as shown in the picture, while hopefully straightening the transverse curl, but the problem is that the 1x1 clips hold the water/tiles too tight in the transverse direction, thus pulling the pieces too close together, so the plates end up making the warp worse as they push the bases apart further (due to the normal tolerance or piece spacing).

I would love any ideas people can offer. I am not sure how Legopard got his to sit so flat. I am finding that even 6 tiles wide gets a noticeable warp and his picture is many times that. 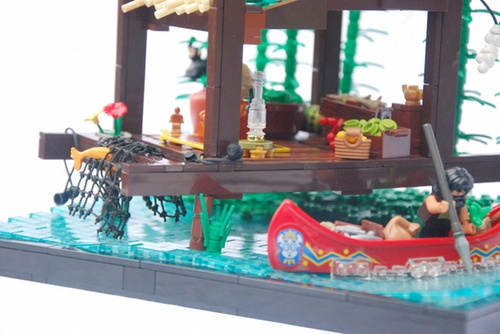 This image of the same model shows that the whole set sits on a frame of bricks. In the inside, you could place bricks underneath wherever necessary to attach the water plates (not only 1x... but maybe 2x10, or several 2x4 in a row). They are invisible, so color and type don't matter. If this row of bricks reaches from one side of the frame to the other, it can shift to allow the longitudinal waves but it cannot curl up transversal(ly?).

Because this construction technique eliminates the natural tiny gap between elements, you can't easily reinforce it just by attaching plates and bricks to the underside. This construction is essentially "out of system". When you attach bricks underneath, you are forcing an error between this and standard system construction. This is why you see the "strong v" when bracing this with plates or bricks underneath.

One way that you might be able to brace it is by using a continuous offset of some sort. Here's an example:

You could also try building it without any reinforcement and then try to flatten it out (e.g. you could leave it under a pile of books overnight). I'm honestly not sure if this is likely to work, and it may permanently deform your bricks if it does, so I can't strongly recommend it. Realistically, this technique is already putting these parts under a lot of stress and may permanently harm them anyway.

To help share ideas, in case somebody else runs into this someday, I will post another idea I have been playing with. I don't know which solution I will go with yet, but I add this idea to help others.

The idea is basically to create some fault lines through the lake where I can hinge the water and avoid the accummulation of stress. I have started playing with it on one end.

Basically, I remove all of the 1x1 clips across the entire width of the lake, but using some pattern that allows a somewhat natural look to remain.

Next, I put a collection of 1x plates beneath that area, so that the colors don't look too bad.

Finally, at my high points in the wave, I use some 1x hinge plates to connect the two pieces. Thus we keep a single top surface, but cause the accummulative warp to remain minimal.

I will try to get a picture of the underside and top to help people see what I am doing.

Not the answer you're looking for? Browse other questions tagged building water or ask your own question.

13
How can I make micro-scale water?
17
What are Good LEGO (or similiar) sets to play-prototype machines working with fluids?
14
Waterproofing LEGO bricks
8
How well do LEGO assemblies hold water?
9
Strongest LEGO structuce - (1) Pillars
6
Strongest LEGO structure - (2) Floor
11
What will happen if I submerge LEGO in water?
1
Problem assembling wings as shown for LEGO Air Race Jet (Technic 42066)
3
How to build a waterproof roof out of LEGO blocks?
5
Putting flipped plates together as close as possible