Some questions about these train magnets: 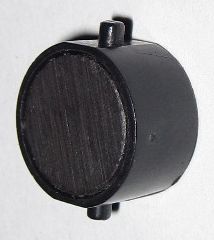 I'd like to know roughly how much weight two of those could lift or what force is needed to separate two of these...

According to BrickLink, the magnet was produced from 1980-2009, would there be a considerable loss of strength between magnets produced in the early days and later?

I suppose how they were stored or how much they were played or dropped would also influence heavily their remaining strength...

I suppose I could re-magnetize them with a neodymium magnet, anyone care to guess or experiment about how strong such rejuvenated LEGO magnet would be?

The magnets were mostly purchased between 1990 and 2000 and were stored for several years in a sunny attic room and then for a few additional years in a cold basement in various states of assembly (separated, joined in pairs or assembled into a column of several magnets).

The weight of the bucket was increased by adding Technic beams, which weigh 2-4 grams each, thus limiting the precision of the breaking point (but see the next paragraph for a more serious limitation).

The kitchen scale has a precision of about 10-20 grams.

All pairs were measured only once.

Care was taken to construct the bucket in a way that results in the center of mass being as close to the symmetry axis as possible, but the amount of deviation was not measured.

The 19 pairs have resulted in the following measurements (all values in grams):

I'm aware of the inherent imperfection in this test method, but in my opinion, it represents a reasonable compromise between time investment and attained precision. I would welcome any critique aiming to improve it though.

17
Are there any mirrored LEGO bricks?
30
Why are LEGO slope bricks textured?
31
What different types of LEGO train tracks exist?
8
Is this LEGO an authentic original?
6
How can I stop the LEGO Cargo train 60052 wheels from skidding on track?
19
Ø in LEGO part names
5
LEGO kit 42082 step 1041 issue
6
Lego Duplo Train Track Switcher washable? / Best way to clean them?
7
Unknown Piece - Looks like a train car