I store some used Lego sets in household plastic boxes originally used for candy. I thought they were ideal, but now I found out the bricks have caught an unpleasant candy scent -- despite cleaning the boxes thoroughly.

After having washed the pieces several times with water and mild detergents, the same smell is still there. What can I do? 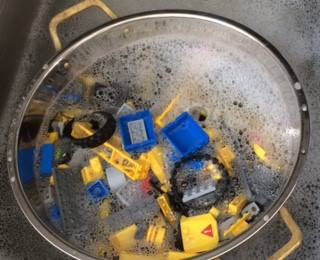 I've read that vinegar or baking soda (but not both at the same time!) can remove scents. If I were you I'd start trying with the baking soda, since the vinegar itself has some odor.

Activated charcoal is used in industrial scale to filter and purify, you could try that too, it is less trivial to get hold of and probably stains the bricks but it can be washed off by water.

A friend of mine used to clean her LEGO bricks by sewing them tightly in a blanket and putting them in the washing machine with the appropriate amount of detergent. If you choose this method, make sure to always stay clear of the melting point of ABS (80°C or 176F), leaving a margin for security. 50°C or lower shouldn't cause any problems

The simplest solution though is probably to allow the bricks to let out their smell by exposing them to fresh air, maybe accelerated by a fan or such. Beware though, if the candy smell implicates sugar residue it can attract insects.

Not the answer you're looking for? Browse other questions tagged cleaning or ask your own question.

9
Does soaking Lego pieces in isopropyl alcohol discolor or otherwise damage them?

10
How can I remove permanent marker from a LEGO brick?
10
How to help a yellowed brick with a sticker?
1
Separating old 2 x 4 brick with wheel holder