Does the Power Functions IR Remote Control 8885 make a good remote for a car?

I have the Power Functions IR Speed Remote Control 8879 and it's great for, well, the train it came with and maybe other applications where you don't need precise control. 8885 looks like it would work for a car but does it speed up the motor the further you press up the joystick? Is the joystick spring loaded in that it returns to "stop" when you let go or it it more like the helicopter remotes of late where you press the joystick up and it keeps that current speed? Do the joysticks move left to right and up and down?

The two sticks on that remote are pure on/off switches (well, forward/off/backward) and come back in their central position if not maintained pushed, and don't move laterally either.

There are two classic ways to control a car with them:

Use each switch to control a motor and wheel (or set of wheels) - so you have to push both levers to advance, and only one to turn. That's how the first PF Motorized Bulldozer is built and it works great for that kind of model.

For a more realistic car, however, you'll need to use one motor to control the forward/backward movement of the car (that's the easy part), and the other for the direction. That's slightly less easy, but you can usually achieve it with some kind of spring-loaded mechanism that puts the direction to straight forward when you're not pushing the lever. Some people have used that part to do it, but I've never tried it myself: 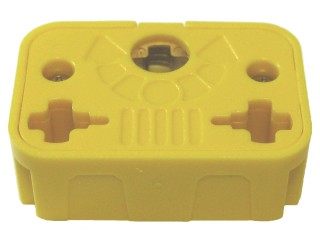 Edit: as I said, using the 8879 remote by itself to control a vehicle directly may be difficult, but I forgot it's a Technic part by itself, which means you can build something else on top of it. See Sariel's modification for a good example with which you can easily control a one-motor-per-wheel model.

Not the answer you're looking for? Browse other questions tagged power-functions remote-control or ask your own question.

2
2016: which Power Functions for controllable car?

33
What are the best options for building a LEGO RC car?
9
What parts are really required to motorize 10219 Maersk Train?
6
Does the LEGO “Power Functions Extension Wire” (8886) work in both directions between old 9V and new Power Functions devices?
7
What LEGO Power Function parts do I need to make an RC car?
8
Running Power Functions Train Without IR Receiver/Remote
2
2016: which Power Functions for controllable car?
5
Problem with running two XL motors motors
3
Can Powered Up trains talk to multiple Bluetooth remotes?
5
Arduino-izing LEGO Technic - ideas for a car / vehicle to choose
2
How to prevent PF M-motor from springing back