Why are minifigure wrenches tapered at the end?

The common minifigure wrench is tapered at one end. Why? None of the other minifigure tools are shaped this way. Is the wrench meant to also serve as a minifigure pry bar? Or perhaps as some sort of flathead screwdriver?

Your second guess was correct. It's not just a wrench. It's listed as a Screwdriver/spanner on Lego.com: 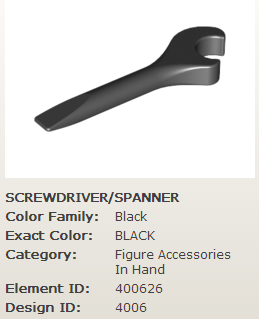 This part was also included in several sets in the Games line as a human tool to remove tiles from the dice. It's unclear (at least to me) whether this part was intended to be used for tile removal when it was introduced in 1979. Here's an example from the Creationary instructions:

23
Why are minifigure head studs now hollow?
25
What are the practical bounds of a minifigure?
8
Why are there no faces drawn on the black heads?
17
Why are they called "minifigs"?
18
Why are there "unique" characters in many sets?
10
Why are 2/3 height bricks with studs on the side 2 studs deep?
7
How can the "Bar Holder with Clip" part be used?
13
Why was the original brick separator changed?
0
Doubt about minifigures of LEGO Star Wars on BrickLink not having accessories like weapons
8
How many minifigs have unique heads?